Crews wrestle with a big 'bird' on Fifth Avenue

Bill Kortum, superintendent on the 17-story 5th & Yesler office building, thought that he had solved his last foundation challenge. The concrete was set in the forms framing the foundation and a unique coffer dam approach to the building mat foundation minimized excavation on the steep hillside. In fact, there was zero excavation or shoring outside the slab itself.

Then came the request from developer Martin Selig to accommodate Songbird, a newly commissioned 85-foot-tall, 50,000-pound steel sculpture. It was being designed and fabricated in Chattanooga, Tenn., by award-winning sculptor John Henry. The siting, public access, engineering, mat foundation and technical challenges in installing the massive sculpture were significant.

A contractor faces unique construction and service challenges when installing public art. Outdoor sculpture in particular, must be precisely sited to complement its surroundings and not interfere with public space or access. Songbird is one of the largest public art works in Seattle, and installing it required flexibility, innovation and an appreciation for the artist’s vision.

It was critical that the majestic sculpture be sited perfectly in the southwest corner of the site. It is next to the Yesler Hill Climb at the bend in Fifth Avenue, one of the steepest grades in downtown Seattle. At its 25 percent grade, the site has a 35-foot gain over 140 feet. 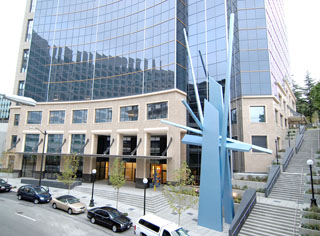 Also, the site’s soil — fill dirt from Interstate 5 construction in the early 1960s — was not suitable.

The proposed location for the sculpture turned out to be adjacent to a Seattle City Light vault which couldn’t take any lateral loading. Also, the main duct bank to the new building went under the selected site and created its own challenges.

Site option number two was supposed to be for a planned water feature, but this corner location was ideal from a visibility standpoint. The team chose this spot despite the fact that there were several constraints: No aspect of the sculpture could overhang Fifth Avenue; and there could be no interference with the access to the Yesler Hill Climb. Also, the dynamic structure could flex as much as 1.5 feet to either side in a high wind, which had to be taken into account so it would never touch the building.

The solution was a substantial mat foundation that required an 18-by-26-by-3-foot concrete base to insure against overturn of the tall, heavy sculpture from the torque of wind loading and potential earthquakes. KPFF, the structural engineer, created flexibility for the artist to adjust the sculpture’s position 15 degrees either way as he assessed the final and optimal orientation during installation.

This would not be your typical anchor bolts system. KPFF put two large, 1-inch-thick steel embed plates in the foundation. The sculpture was later placed, oriented by the artist, and secured to the foundation by welding to the embeds.

While the siting and foundation challenges were being addressed, the civil work had to begin for the hill climb. The steep slope required specific preparation to begin the retaining walls and stairs for the hill climb. The team came up with the idea of burying a sacrificial retaining wall that would be backfilled to stabilize the slope. Later, when the designed planters adjacent to the art work had to be altered, this sacrificial wall became a necessary and architectural component of the project.

When the sculpture arrived on a flat bed truck last August, it couldn’t have been a busier time for Fifth Avenue. Crews needed an area where the pieces of the sculpture could be inventoried as well as room for a crane to hoist it into place.

The sizing of the erection crane was originally based on the heaviest piece of the sculpture, which allowed the two right southbound lanes of Fifth Avenue to remain open to traffic during erection. Then the artist wanted the capability to rotate the entire piece following assembly and that required a much larger crane to handle the weight and closing Fifth Avenue entirely, from James Street to the Yesler overpass.

The original construction schedule showed five days for installation, but due to SDOT requirements, it had to be accomplished in three days.

Carey Crutcher Smith grew up in the construction industry and formally joined Lease Crutcher Lewis in 2007 as director of marketing. She has more than 20 years of communications/marketing management experience in a variety of industries.