If recent years at Boise State University can be summed up in a word, it’s growth. From student population, which reached 20,000 for the first time this fall, to research dollars, which has nearly tripled since 2004 to more than $50 million in fiscal year 2010, the university is rapidly advancing on all fronts.

This growth is particularly evident in Boise State’s drive to build an urban campus worthy of its place at the center of Idaho’s academic, commercial, governmental and cultural life. In just the past four years, the university has opened or started construction on 11 new major building projects on campus, encompassing more than 600,000 square feet of classroom, laboratory, office, event and common area space. That amounts to more than a 25 percent increase in campus building space.

Each project addresses very specific needs of our campus community and is designed, built and used in ways that set the foundation for the university’s future success.

Rather than relying on dwindling state funding to build the facilities it needs, Boise State has increasingly turned to private supporters, alumni and corporate partners — as well as thoughtful use of the university’s strong bond ratings — to fund the construction of this vital infrastructure. 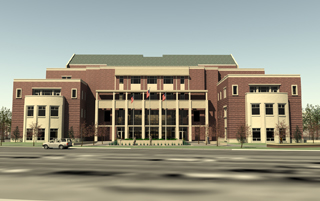 Images courtesy of Boise State University [enlarge]
The $28 million Micron Business and Economics Building, now under construction, is expected to finish by the fall of 2012. It will house classrooms, lecture halls and a student commons.

Destination Distinction, a recently completed $185 million fundraising campaign, has been a driving force behind the construction. An academic building fund uses proceeds from the sale of football tickets to help construct academic space. And Boise State has leveraged a combination of state and federal funds, strategic student facilities fees and private gifts to reach its building goals.

The scope and prominence of the projects has impacts beyond campus as well, since local contractors have won much of that work. In fact, five other Boise State construction projects either begun or completed in the past year were recently named among “2011 Idaho’s Top Projects” by the Idaho Business Review, a local business newspaper.

There are three major construction sites on campus today, with the largest being the 119,000-square-foot Micron Business and Economics Building, currently under construction alongside Capitol Boulevard, one of the state’s busiest thoroughfares. The $28 million, four-story building will open by fall 2012, serving as a western gateway to our increasingly busy campus.

Designed by Boise firm Hummel Architects and Denver-based AMD, with support from Integrated Structures from Berkeley, Calif., the building will take advantage of the latest sustainable building practices. Geothermal energy will be the primary heating source and natural light will be optimized. The high-performance, environmentally progressive building is expected to use at least 40 percent less energy than a comparable structure.

It will house classrooms and lecture halls, a courtyard, unique student work and research spaces, and a student commons area with food service.

Funding for the building is anchored by a $12.5 million gift from the Micron Technology Foundation. Boise-based ESI Construction is the general contractor for the project. The business building is the contractor’s fourth project on Boise State’s campus.

As the university grows, so does demand for on-campus housing. As a result, Boise State has doubled its student housing capacity since 2004. We’ll add to that total with the completion of a new student housing community on the south side of campus.

Lining both sides of one of the university’s secondary thoroughfares, the project will include 90 four-bedroom units designed for 360 juniors and seniors. The $15.8 million housing project is being funded with a combination of redirected bond proceeds that were a result of savings from previous building projects, as well as university and student housing reserves. The university will be repaid with student housing revenues. 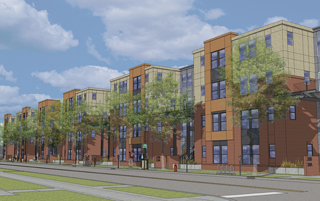 [enlarge]
A $15.8 million residential project will have 90 four-bedroom units for upperclassmen when it opens in January. Another 514 beds could be on the way. Since 2004, Boise State has doubled its student housing capacity.

Each unit will have four bedrooms and two baths and will offer students more space than is typically found in student housing. The initial 360-bed project is part of a larger 874-bed design that may be completed at a later date. ESI Construction is the general contractor for this project as well, and expects to finish in January.

The third active construction site is for a parking garage expansion that will add about 700 parking spaces and 7,300 square feet of office space.

Just this year a wide range of other projects was completed and will be in full use for the first time this fall.

Designed to encourage and support collaboration, the research building is home to the departments of Geosciences, Civil Engineering, Public Policy and Administration, and Political Science, as well as our community and regional planning program, the environmental finance office, the Public Policy Center and the Frank Church Institute.

It will support research on the environment, transportation, water, land use, and community and regional planning. The research facility houses 43 labs, clean rooms, freezer rooms, a 140-foot groundwater testing well and a connection to the city’s geothermal heating system.

Additionally, a new transit center was added to the Student Union, giving this central building an entirely new look as well as a transit waiting area that provides bus and campus information.

Also, the recent renovation of a newly acquired off-campus property has created a new home for several programs and centers, including the Center for Orthopaedic and Biomechanics Research, Boise State Public Radio, Office of Sponsored Programs, Division of Extended Studies and the Osher Institute. Finally, the Arguinchona Basketball Complex, on the southwest corner of Taco Bell Arena, is a 10,000-square-foot, two-level facility that will provide locker rooms, a film room, lounges and study areas for the Bronco men’s and women’s basketball teams.

Just two years ago Boise State celebrated the completion of the Norco Building, an 81,000-square-foot home for the university’s School of Nursing and University Health Services; the renovation and expansion of 252,000 square feet in the Student Union building; and the addition of a 17,000-square-foot aquatics complex on the south side of the Student Recreation Center.

With its growing enrollment and an expanding research agenda, Boise State is fast becoming a university of choice for students across the West and beyond. The accompanying demand for a world-class urban campus is being met with a construction campaign that has touched practically every aspect of university life and is worthy of Boise State’s success as a metropolitan research university.

James Maguire is the associate vice president for campus planning and facilities at Boise State University.