The gold standard in the HVAC industry has long been the ground-coupled water source heat pump. Unfortunately this system comes with a golden price tag. With capital budgets shrinking and service costs escalating, owners are faced with the decision of having to pay now or pay later.

Acknowledging this issue, BCE Engineers developed a system that captures a manageable capital cost while maintaining a very low life-cycle cost. The system is called the induction system.

The table compares the one-year energy use at a pair of Bethel School District elementary schools that use different air-handling systems.

With a ground-coupled heat pump system and an induction system installed in two schools of similar size and shape in the same school district, we were provided a unique opportunity to compare the real-life energy use of the two systems.

Erickson McGovern Architects and BCE Engineers were the design teams for the schools.

The utility information shows that while ground-coupled heat pumps still consume less electricity and natural gas than the induction system, the peak-demand rate is much higher. Over the period we collected our data, Thompson consumed 328 kilowatts of peak-demand electricity, versus 244 kilowatts for Fredrickson. Considering the cost of electricity is the highest during peak demand, Bethel saved a significant amount of money using the induction system.

What is an induction terminal and where is all the energy savings coming from? 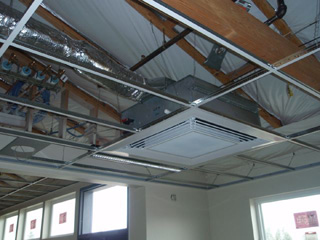 Induction terminals, commonly referred to as active chilled beams, can be described as a fan coil without a fan. Since most of the energy used in buildings can be attributed to fan energy, the induction system shines because it eliminates the need for a fan in every classroom.

The construction of an induction terminal is quite basic: It is composed of an upper inlet chamber, a lower mixing chamber, heating and cooling coils, and a ceiling grille.

The principle of operation is very similar to a traditional variable air-volume system, but with smaller air-handling units and ductwork. A central air-handling unit is utilized to push fresh ventilation air into the upper air chamber. The air is then discharged out small nozzles into the mixing chamber.

The high pressure condition at the discharge air nozzles causes air from the room to be “induced” up through the ceiling grille and across the coils. After the air crosses the coils and is heated or cooled, the room air is mixed with the fresh ventilation air before being discharged back into the room through the supply grille.

The induction system offers many benefits in addition to low energy consumption at a reasonable capital cost. Some of these benefits include:

• Reduced maintenance costs. Induction terminals have no moving parts and only a lint screen that requires annual service. Many of the terminals available on the market are designed to have the lint screen cleaned by a vacuum cleaner from floor level.

Sumner School District cleans its lint screens by this method and is able to clean all the induction terminals in its 50,000-square-foot elementary school in just over 30 minutes.

• Less ductwork. Induction terminal systems use substantially less ductwork than other traditional forced-air systems on the market. The smaller duct sizes allow building floor-to-floor heights to be reduced and ceiling heights to be increased.

Currently, the BCE-designed induction system is being used in three schools in Bethel School District, five schools in the Sumner School District, and in five facilities on Joint Base Lewis McCord. The system has not only provided the owners of these facilities with a lower upfront installation cost, but has decreased their peak-demand utility charges and annual maintenance costs.

In Bethel’s case, the mechanical capital cost for the induction system was approximately $500,000 less than the ground-coupled heat pump system, and is on track for a lower life-cycle cost over 30 years. While traditional ground-coupled heat pump systems provide outstanding energy savings, gold-standard energy savings do not have to come at a golden price.

Chris Caffee is a BCE Engineers principal, an energy conservation specialist and a lead in the mechanical department. Joe Snyder, an associate at BCE Engineers, is a project manager.