I’ve always loved museums and cars. Even as a child I would spend hours exploring my local museums. Still, who would have guessed as an architect I would be lucky enough to find myself designing museums for cars?

But the sad reality in today’s world is that museums are not considered essential, especially car museums. In part, I would contend, because architects continue to push clients toward the most expensive end of the building spectrum. These grand edifices can cost more to build per square foot than many hospitals or high-rise office buildings — sometimes by a factor of 10.

So it really shouldn’t have been a surprise when the LeMay client came to us with a construction budget of around $100 per square foot. Putting this in perspective, a typical museum will cost anywhere from $400 to “the sky’s the limit” per square foot.

I guess in our own naivety we viewed this task of designing a museum for $100 per square foot as being easy. Honestly, how hard could this be? 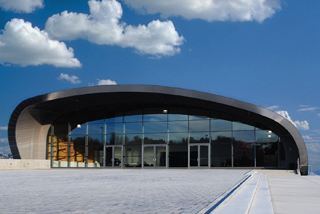 Photo by David Imanaka [enlarge]
The glu-lam beams that compose the roof were identically shaped to cut costs, but then trimmed to different lengths to give the roof a more varied form.

But like many things in life, sometimes when you don’t think about it and just do it, you succeed. At this point that logic was as good as any.

With that in mind, we did realize a few things right off the bat. If we were going to succeed, it wasn’t going to be because we invented some new method of construction or some kind of new magical material. So we needed to be realistic about our expectations.

The first question we asked ourselves: Are there any buildings out there that can be built for a $100 per square foot? Oddly enough, the only building we came up with had some similarities to our own building type: a parking garage.

So what is it about parking garages that make them so inexpensive? What we concluded was that they are simple, repetitive designs, and they don’t use expensive materials.

So following that logic our first step was to conceptually design a museum that was simple and straightforward.

More specifically, the interior of the LeMay museum has three longitudinal bays, running the full length of the building. The two outside bays are ramps, one up and one down, similar to a parking garage.

The center bay is flat and is used to store the vehicles. The two perimeter ramps are extremely gentle in slope and rise about 10 feet over 300 feet. They are used for both the transport of vehicles from level to level and display of the vehicles in a chronological manner. These ramps also eliminated the need for an expensive car elevator.

The roof was the more complex part of the building. Granted, a parking garage is a simple and cost-effective building, but it’s not a museum. We still needed to create an iconic building because in our eyes, stated or not, the client wasn’t looking for cheap — rather, they were looking for impressive and inexpensive.

This problem made me think of when I lived in Europe. I remember going to my first Victorian train station, and as you enter the front door the building seems relatively modest and unassuming. But once inside you find a room large enough to house at least 10 or more trains from end to end.

Intended or not, the design was simple and impressive. So we set out to design effectively a Victorian train station for the entry level of the museum, but without breaking the budget.

The obvious solution was to arch over the 100-foot span with steel beams, similar to the Victorian train station. But steel, unlike in the Victorian times, required fireproofing and that was expensive.

Option two was to use large wood glu-lam beams. Oddly enough, heavy wood timber won’t catch fire as easily as you would expect, so they don’t need fireproofing. Best of all, they are inexpensive assuming you use a repetitive shape.

Our only problem with the glu-lam beams is that if we truly use only one shape, the end result will look more like an oversized corrugated drainage pipe. Clearly not something the client would accept. So we came up with a method of creating a single shape for the beams and trimming the lengths to allow us to shape the form.

This brings me to our third challenge: As with parking garages, try and avoid expensive materials.

I have only once seen a parking garage that used anything other than concrete. In this case, the concrete was covered in stone. It looked very nice, but I’m sure the owner wondered why he owned the most expensive parking garage in America.

In our case we realized the budget would not allow us decorate the building with expensive stones. Instead, we exposed the concrete. The contrast between the warm wood colors and the cool concrete created a beautiful combination.

Bottom line, the design came in at $106 per square foot. Given that the typical museum is often over $400 per square foot, I’m proud of what the team was able to achieve.

Alan Grant is a founding principal of Grant Price Architects in Los Angeles.