The original HVAC design for the LeMay museum had only heating and ventilation, and came in above budget.

The building architecture presented several HVAC design challenges. Any equipment installed on the roof would significantly affect the striking roofline, and with museum space at such a premium, interior mechanical spaces were not an option.

The heating and cooling system were designed using packaged HVAC units normally designed for rooftop applications, but here installed at grade level on the west side of the building. From these units, air is fed directly into the building via underground concrete plenums.

The physical proximity of these air-handling units to property lines, along with the radiant sound, raised noise-level concerns inside and outside the building. Acoustical performance is very important for museums. In addition to ensuring low sound levels inside the museum, the engineering team also had to work out exterior sound level performance. 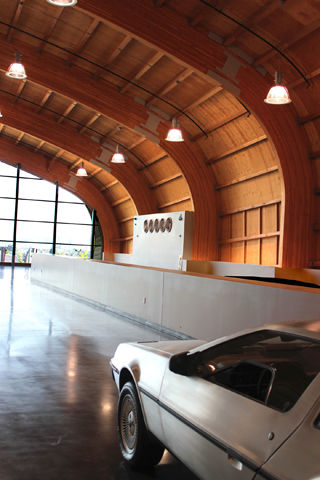 Photo courtesy of PSF Mechanical [enlarge]
Four sets of air diffusers were installed in the main gallery in places where they wouldn’t require exposed duct work.

Noise level evaluations were performed and sound attenuators were installed in the underground corridors to achieve the low sound levels expected in a museum. This resulted in units that are powerful enough to feed air to the galleries on all five levels of the museum yet perform quietly enough for the museum gallery to “sound like a deer walking through a library,” as a PSF project manager put it.

The building interior is similar to a parking structure, with six connecting side ramps that spiral up to the main gallery, but with offices and meeting spaces on both ends of the structure.

We faced the challenge of providing good air movement along the connecting ramps as well as the vast space of the main gallery with its 37-foot ceiling stretching across the entire main level.

We accomplished this by utilizing air displacement. With an air-displacement system, cooling and heating supply temperatures are mild compared to a typical air-conditioning system.

In an average office environment, cooling supply-air is provided anywhere between 49-57 degrees. This air displacement system is designed to provide cooling supply air between 60-67 degrees. The higher supply-air temperature helps avoid drafts, hot spots and cold spots that could develop in the large open area if colder air was provided.

The heating system in a typical office would provide supply air at 105 degrees. The LeMay system is designed to provide heating supply-air between 75-90 degrees. The lower temperature allows the supply air to better mix with the environmental air and helps eliminate the collection of warm air at the top of the main floor.

The process is facilitated by the use of high-velocity, long-throw air diffusers called punkah louvers. These are designed for large spaces, and four sets were installed in the main gallery, eliminating the need for exposed duct work.

The diffusers move air up through the side ramps into the main gallery, where the air mixes before being exhausted, creating consistent temperatures between all floors. As the temperature differential between the top and bottom of the building increases, the system automatically adjusts the level of air flow to compensate. Carbon dioxide monitors detect variations in building occupancy and determine the need for more fresh air from outside.

This strategy, referred to as demand-controlled ventilation, saves energy and ensures proper ventilation levels are maintained as occupancy levels within the building fluctuate. In addition, air is displaced on regular schedules for standard hours of operation and special events, all controlled by a direct digital control system.

The displacement system is designed to work with the mass of the building and respond to varying conditions slowly, gradually and imperceptibly, rather than immediately and noticeably. If we have done our job well, museum visitors will not notice the HVAC system at all, leaving their attention focused on the main attraction: the cars.

Robert Wills is a 37-year veteran of the commercial mechanical industry and was PSF’s project team lead for the LeMay — America’s Car Museum project.