1925 building comes down to make way for apartment tower 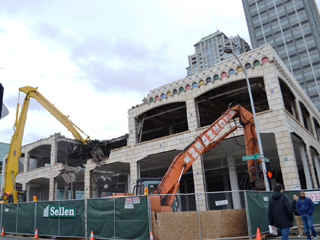 Photo courtesy of Ascendent LLC [enlarge]
The Cosmopolitan Motors Building at the corner of Eighth and Lenora in South Lake Union will be crushed to make aggregate.

The Cosmopolitan Motors Building stood at the corner of Eighth Avenue and Lenora Street since 1925, but crews have taken it down to make way for a 39-story apartment tower.

Demolition contractor Ascendent LLC of Pacific removed two above-ground floors of the 48,000-square-foot building, and left the first-floor slab intact so tiebacks can be installed to support the basement walls before starting excavation work.

Ascendent project manager Rick Estes said the slab is being supported with a “forest” of shoring and steel plates. He said his company devised a plan to use 125 shore poles and Kosnik Engineering approved it.

Estes said the tricky part was coming up with a shoring system that could support the 45-ton excavator while it tore down the building. 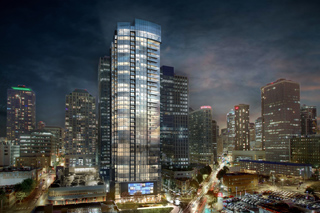 Image courtesy of Weber Thompson/studio 216 [enlarge]
Boston-based GID is building a 39-story tower with 355 apartments set to open in 2015.

Ascendent is finishing the first phase of its work by exposing old footings in the basement that were built against an adjoining police station.

Sellen Construction project manager Adam Kriefall said he expects to get the shoring permit later this month, and then start tying back the basement walls.

Sellen is the general contractor for the 355-unit apartment tower.

A second phase of Ascendent's $500,000 contract will be removing the basement early next month. Estes said it will take about two weeks to remove columns and portions of the foundation. He said the foundation will be cut down 4 feet below grade and shoring for the new foundation will tie into what is left.

All concrete from the Cosmopolitan Motors Building is being recycled by Lloyd Enterprises of Federal Way. It will be crushed to make aggregate.

Kriefall said shoring subcontractor BBM and excavation subcontractor CTI will start work in March or April. He said they are waiting on shoring, structural and building permits from the city.

Weber Thompson is the architect, interior designer and landscape architect for the tower. The engineers are Magnusson Klemencic Associates, structural; KPFF, civil; and Rushing, MEP. Morrison Hershfield is the envelope specialist.

Kriefall said the building should be finished in spring 2015.