Images courtesy of GGN/Graham Baba Architects [enlarge]
The $14 million plaza will be flanked by the 11-story Larson Building. It will have fountains for kids and a small lawn to attract families.

The sunny city of Yakima in the burgeoning Yakima Valley wine region has a number of tasting rooms, breweries, restaurants and shops downtown, some in historic buildings along its wide streets.

Downtown hosts a farmers market, festivals and a basketball tournament, but lacks a central place for residents and visitors to gather.

That should change soon.

Construction is slated to start in spring 2016 and be finished by the end of that year on a 100,000-square-foot central plaza with an open-air market hall on what is now a city-owned parking lot. The lot is bordered Chestnut Street, Yakima Avenue, and South Second and South Third streets.

Seattle-based firms headed by two people who grew up in Yakima and are heavyweights in their field — Kathryn Gustafson of Gustafson Guthrie Nichol and Brett Baba of Graham Baba Architects — did the conceptual design. Magnusson Klemencic Associates is the civil engineer.

The city, located in one of the leading agricultural areas of the U.S., has also hired Graham Baba and BDS Planning & Urban Design to study the feasibility of creating a year-round public market with a business incubator near the plaza.

Yakima envisions the projects as anchors to attract more small shops, along with restaurants, wine and beer-related enterprises, entertainment and hotels, said Sean Hawkins, the city's economic development manager. It hopes that, as more residents and visitors view downtown as a year-round destination, more redevelopment will take place.

There are a number of buildings within a block of the future plaza “that we feel are prime development opportunities, and there's some parking spaces that can really be turned into buildings,” said Hawkins.

The plaza is expected to cost $13 million to $14 million, he said, but the city anticipates it will get “five times” that in development activity around it.

It's already gotten some.

The hotel would be on Yakima Avenue in the Great Western Building, which is listed on the National Register of Historic Places. JEM Development Co., owner of Yakima Mall and developer and owner of Hilton Garden Inn downtown, is behind the project. 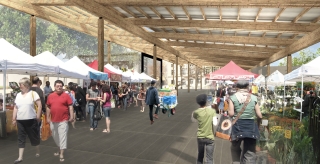 [enlarge]
In the market hall, there will be stalls for vendors selling local products.

Downtown is a hopscotch of great older buildings mixed with newer nondescript ones, parking and vacant lots, and one hotel, although there are a number of hotels within two miles of the core.

Downtown has a few pocket parks but no central place to hosts events, without the inconvenience of closing off main streets like Yakima Avenue, Hawkins said. And that type of space lacks ambiance — and shade — an important component for a city that in summer gets about 16 hours of sunshine daily.

The plaza will be framed by the 11-story Art Deco Larson Building, the old Capitol Theatre building, and the William O. Douglas Federal Building, an example of Second Renaissance Revival architecture.

It will have terraced seating and a section where concerts, movies, festivals and even an ice stating rink could be held in winter.

Hawkins said Kathryn Gustafson designed it with fountains for kids and a small lawn to attract families, so the plaza will feel full even when events aren't happening there. In turn, the fountains can be turned off during events such as farmers markets, concerts and craft fairs. And the lighting will provide ambiance for different events that could include a Christmas tree lighting ceremony, he said.

The open-air market will provide shade and have public parking when events aren't in session, to assuage concerns of some residents about losing parking downtown.

In the public market, there would be stalls for vendors selling local products, small restaurant spaces, and a commercial kitchen local food-based businesses could use to work on their ideas at an affordable rate, Hawkins said.

The market would likely go in a building that would be renovated, although a new building may be constructed for it, he said. The feasibility report is expected to be done in February.

Kathryn Gustafson's acclaimed projects are in Europe, North America, Africa, Southeast Asia and the Middle East. With Gustafson Guthrie Nichol, she is the principal landscape designer for the civic park at Hemisfair in San Antonio and the National African American Museum of History and Culture in Washington, D.C.

She was not available for comment, but her firm said the plaza design team has local roots and international experience that will make the project a unique reflection of Yakima “as a place and a culture.”

“As someone who grew up in Yakima, I want to do an absolutely stellar piece in my home town,” she said in a press release. “For me, this project is about the place where I was born and raised before I went out into an international realm.”

Hawkins said Yakima is looking for a public market that mirrors Pybus Market in Wenatchee.

Pybus opened in 2013, and as of last May had 20 year-round tenants, including restaurants, shops and produce stands, all housed in a former 1940s steel warehouse. The market has inspired other development in the area, including a brewpub and restaurant.

Graham Baba was the architect for the Pybus core and shell. It also designed the popular Melrose Market and the public space with a market feel for the Via6 apartment project in downtown Seattle.

The firm likes to do placemaking civic projects that can be catalysts for revitalization, and hopes the Yakima projects help bring more people back to that downtown.

“We'd like these projects to garner some new energy to revitalize the urban core there,” Brett Baba said. “Unfortunately Yakima tore down so many of its great old buildings so anything we can do to save and reuse the older buildings downtown, we would love to help with that.”

Brett Baba spent most of his childhood in Yakima, as did Andy Brown of the firm, who is also working on the plaza and feasibility study.

“I think that we understand the culture, the climate and the history of that place,” Baba said of the design team.

Hawkins said that two years ago the city of Yakima hired Crandall Arambula to do a master plan to make downtown more pedestrian friendly and bring back more retail. Yakima looked to other cities, including Portland and its popular Pioneer Courthouse Square and Missoula, Montana, and its Caras Park, which Hawkins said drew almost a million people downtown last year.

The Yakima plaza is the first public project stemming from that plan.

In the early 2000s, Yakima began investing in public infrastructure to revitalize its historic downtown and encourage development. As a result, some local businesses selling regional goods set up shop there.

The city has made progress, Hawkins said, “but you can still come downtown on a Saturday and it's really quiet.”

The city hopes the plaza and the public market are catalysts to create a critical mass, and it's very important that people who grew up in the area are involved in the projects, he said. “They know people. That's instant credibility.”

That and their “love affair with some of these older buildings” have aided the city's effort to garner pledges from businesses to help with the costs of the plaza, he said.

“I do not think we would be at this point here today without having their local connection to this project,” Hawkins said.