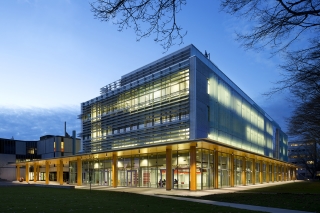 Photo by Martin Tessler [enlarge]
University of British Columbia’s Earth Science Building is one of only three taller modern wood buildings in North America. It sequesters about 1,005 tons of CO2 from the environment.

Developers, designers and others are seeking alternatives to traditional steel and concrete to address increasing carbon footprint concerns and a social responsibility to build smarter and more sustainable buildings in a cost-effective manner.

Perkins+Will recently conducted a survey for the Forestry Innovation Investment and Binational Softwood Lumber Council to study 10 tall wood buildings (five stories or more) throughout Europe and Canada to glean lessons learned in support of the advancement of tall wood buildings in North America.

We share the benefits of wood, a snapshot of the survey results, and a case study in neighboring Vancouver, B.C.

The earth contains 1 trillion tons of wood growing at a rate of 10 billion tons a year. Responsibly sourced wood is one of the world's most renewable resources, providing aesthetically attractive projects while positively effecting climate change.

Production and processing of wood uses less energy than most other building materials, resulting in a significantly lower carbon footprint. In addition, wood products naturally store the carbon that the living tree had removed from the air.

From a design and construction perspective, wood is a natural insulator (15 times better than masonry), is fast and efficient to build with, and is many times more cost effective.

Buildings can now safely reach heights beyond four levels with lower environmental impact due to the relatively recent advent of engineered mass-timber products such as cross-laminated timber and laminated veneer lumber that increase wood's structural soundness.

Perkins+Will's researchers visited 10 built projects — from the Tamedia project in Zurich to the 3xGrun project in Berlin — and talked to a host of stakeholders including building owners, designers, timber fabricators, contractors and users. The results were published May 2014 in the Survey of International Tall Wood Buildings.

Commitment. An early commitment from the owner and project team on the decision to use timber as a principal structural material and a continued focus throughout the project is imperative for successful results. The study found that innovation, market leadership, and carbon reduction were the most common motivators among the owners and project team members.

Early planning. All parties must understand the additional research, discussions and effort introduced during pre-design in order to identify and resolve possible issues upfront with the use of an unfamiliar product. The most successful projects took place where existing laws supported the use of low-carbon-content materials, renewable resources and energy efficiency in construction.

Collaboration. The essence of innovation lends to challenges and an increased need for collaboration among all stakeholders — from owner and project team to local jurisdictions and timber fabricators. The survey showed shortened timelines by engaging local jurisdictions during design development and collaborating with fabricators to maximize prefabrication of major structural elements.

Holistic innovation. Innovation cannot be met by the application of one product alone. The study states that an innovative process point of view is beneficial in achieving overall success. Construction teams engaged early in the process can help align design concepts, constructability, and the client's budget/schedule requirements. Similarly, for authorities having jurisdiction, the approval process was expedited by the presentation of detailed research and refined design details that met or exceeded safety standards.

The five-story structure is organized into two wings that surround an open-concept atrium with a free-floating, cantilevered solid timber staircase.

Unlike the concrete laboratory wing, the academic wing uses wood as the primary structural material, providing a welcoming environment while sequestering approximately 1,005 tons of CO2 based on the 1,353 cubic meters of wood used in the project.

As one of only three examples of modern, taller wood construction in North America, the Earth Sciences Building has become an important example of the potential of mass timber products in major construction projects in our market. It is now part of a small group of recently built projects around the world that successfully used wood in buildings above four stories.

While wood-frame construction is not new, its application to buildings over four stories is a rising trend.

Seattle's current code allows for a range of three to five stories of wood- or timber-frame construction depending upon the occupancy use and code-designated construction type, but creative designers can make the most of a variety of provisions and work with our city's agencies to push those limits.

Ryan Bussard is an associate principal at Perkins+Will in Seattle. He designed King County Library Systems' Tukwila Library, the Water Institute of the Gulf in Baton Rouge, Louisiana, and the Center for Novel Therapeutics in La Jolla, California — all using the latest wood and timber technologies.