A convention center that takes you to the river 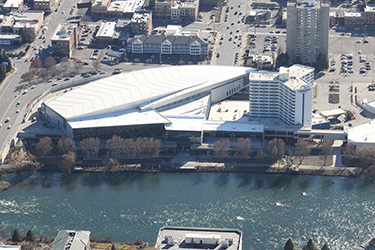 Photos courtesy of the Spokane Public Facilities District [enlarge]
The expansion includes the row of structures along the riverbank, where people have gathered since long before settlers arrived.

The Spokane River and its waterfalls have been a meeting place since long before settlers arrived, when Native Americans gathered there to share the abundant salmon. Later the river attracted Spokane’s founders, who utilized the falls as a source of power. In recent history, Expo ’74 attracted the world to the river and its falls.

Since 1974 the river has continued to serve as the civic center for Spokane. Visitors and conventioneers are consistently drawn to the river, its falls and the adjacent Riverfront Park.

In 2012, Spokane County voters approved funding to expand the convention center to improve its functionality and to enhance its connection to the river.

This latest expansion of the Spokane Convention Center not only creates a world-class convention facility, but also makes the Spokane River an integral part of the visitor experience.

A link to the river

While providing more exhibit space and better-positioned meeting rooms, the expansion improves the Spokane Convention Center’s visual and physical connections to the river and the Spokane River Centennial Trail.

Built between the existing facility and the Spokane River, the new addition’s meeting rooms, exhibition hall and pre-function spaces overlook the river through large expanses of glass. Special sliding doors can be opened to make this view a part of the ballroom experience.

The second-floor overlook provides a 180-degree view up and down the river, and offers a view to the lower floor level. Artist Steve Adams took advantage of the volume in this space with his hanging installation “Memory and Hope,” a testament to the salmon that once thrived in the river.

The rooftop terrace, surrounded by a green roof, provides an outdoor venue linked to the riverbank by the Riverside Steps. At the river level, outdoor patios under large shade trees provide a peaceful respite between meetings. These patios provide a closeup look at the river as well as opportunities to see runners, walkers and bicyclists using the Centennial Trail.

The expansion includes 16 long-span trusses, which had to be assembled on site. The largest truss, which spans the length of the Centennial Ballroom, serves as the exterior facade of the exhibit hall above.

Made of 180 tons of steel, this 30-by-225-foot truss is about the length of a Boeing 747. Exposed by the glazed facade, it is reminiscent of the historic railroad bridges that used to occupy the site. 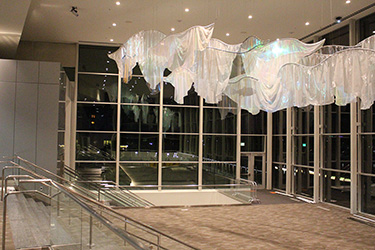 [enlarge]
An installation by Spokane artist Steve Adams hangs in a space overlooking the river.

Many of the improvements to the convention center and Riverfront Park benefit the entire community, not just those attending meetings and events. To preserve the environmental integrity of the Spokane River, careful erosion-control measures were used during construction to prevent contamination.

Any groundwater or stormwater discharged from the site had to be first collected and put through a process called electrocoagulation, where the water is “zapped” with electrical currents to filter out potential contaminants.

The riverbank landscape has been restored by using natural riparian plants that are indigenous to the Spokane River. Green lawn areas, which attract geese, have been reduced to minimize potential human and goose conflicts along the trail. An art installation that extends the length of the site tells the story of Spokane’s history while discouraging visitors from approaching a steep and slippery river bank.

For those who want to get close to the river there are overlooks with interpretative signage that explain the history of the river and its importance to the region.

In spite of the size of the addition and limited available land, public access to the river has been maintained.

The popular 37-mile-long Centennial Trail, which follows the river through Spokane, has been improved along the convention center. A pathway under the addition links a new vehicle drop-off area for easier access to the trail.

There is also a direct pathway from the second level of parking to the trail and a future boat launch. Building-service areas that were once visible from the Centennial Trail are now screened from view while still remaining accessible.

In recent years, publications like USA Today and Outside magazine have started to take notice of the tourist appeal of the Spokane River. The new convention center builds upon the tradition of gathering by the river for out-of-town visitors, as well as those who live in the Spokane area.

The tourist’s riverfront experience in Spokane is enhanced by the trail improvements, the new green roof terrace and Riverside Steps. It’s an ideal place for weddings, family vacation photos, school field trips, or a place to take a rest from nearby shopping.

Jeff Warner is a principal at ALSC Architects and Rafael Viñoly-Menendez is a partner at LMN Architects.