Glass walls open to bring the outdoors in 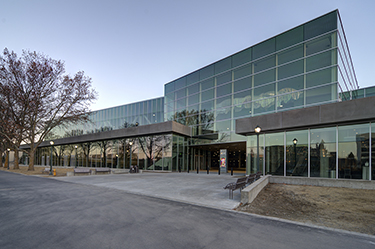 Photo by David Elms/ALSC Architects [enlarge]
The team based its design on the Spokane World's Fair theme: "Meet Me by the River."

The Spokane Convention Center completion project represents the culmination of an ambitious program to create a cohesive campus including exhibit, meeting and ballroom facilities, along with the INB Performing Arts Center.

Building on the existing facility’s economic success, the project completes the expansion that began with the opening of new exhibit halls in 2006, adding function spaces that will allow the center to attract major national events to Spokane.

The Spokane Public Facilities District held a design-build competition in early 2013, and the team of Garco Construction, LMN Architects and ALSC Architects was awarded the $41 million project. Spokane-based ALSC was the prime architect and design collaborator. Seattle-based LMN Architects, which was responsible for the design of the 2006 expansion, led the design.

Garco led the design-build team, and was responsible for delivering the project on budget and within an incredibly quick schedule — 22 months from award to opening day. (Many projects of this scale typically take 18 months for the drawings alone!)

The Spokane PFD’s acquisition of the C.I. Shenanigans riverside restaurant site in 2010 opened up the possibility to connect the existing convention center spaces to the Centennial Trail and the banks of the Spokane River.

This opportunity to capitalize on Spokane’s “Near Nature, Near Perfect” brand was seized upon by the design-build team. On the 40th anniversary of the Spokane World Fair, the team based its design concept on the fair’s theme song, “Meet Me by the River.”

The design maximizes the connection to the Spokane River, featuring large expanses of glass and a series of outdoor function spaces that bring the internal life of the building out into the public realm.

Visitors enter the center from the Point Lobby on Spokane Falls Boulevard and circulate through the building to arrive at the “Overlook.” The Overlook features a 35-foot tall ceiling, its three walls made entirely of glass to create a truly immersive experience, making the most of the riverside setting.

From here, visitors can reach each of the facility’s major function spaces: the exhibit hall to the east, ballroom below and meeting rooms to the west on two levels.

Convention centers have traditionally avoided daylight in function spaces, given the need to control lighting conditions for events with strict audiovisual requirements. Improvements in digital display technology have substantially eased these concerns, and facilities are moving towards more openness and transparency.

The Spokane Convention Center’s 2006 exhibit hall expansion was one the first in the U.S. to introduce views and light into this typically “black box” space, and the completion project takes it to a whole new level: The entire north face of the exhibit halls is opened up to the river, with a 25-by-225-foot glass wall that offers spectacular views and takes advantage of the ideal north light.

The new Centennial Ballroom is another space that is truly innovative within the conventions and meetings industry. Unlike most such spaces, which tend to be located on upper levels, Spokane’s ballroom is on the ground floor, steps away from the Centennial Trail.

The 12,000-square foot space (which can be subdivided into four smaller meeting rooms) features three sets of 25-foot operable glass walls, opening up the ballroom to the riverside. The ceiling includes LED lighting that can be programmed to create thousands of color combinations, allowing show organizers to individually “brand” the space for their event.

The connection to the Spokane River goes much further than just the visual. For the first time, visitors will be able to step out from their meeting, exhibition or reception and enjoy the spectacular natural setting. A variety of outdoor function spaces have been designed to host multiple events, each with its own separate area.

The Riverside Terrace, on the west side of the project, can be accessed from both the riverside overlook and the new upper-level meeting rooms. The terrace is designed to accommodate a large tent structure, and its upper-level location gives it privacy for events such as wedding receptions. Power and data are provided for audiovisual and lighting.

The Riverside Steps connect the terrace back down to grade, combining a gentle stair and larger-scale “seating steps.” Western exposure makes the steps a great location to lounge in the sun or enjoy lunch or a coffee break. Hardy joggers are already using them for an added workout!

The event lawn, just north of the Doubletree Hotel, provides an informal gathering area. With the Riverside Steps acting as grandstand seating, it is the ideal location for a pop-up concert or outdoor movie night.

This variety of outdoor function spaces represents a competitive advantage for the Spokane Convention Center, reinforcing its unique setting and creating a memorable experience for visitors, encouraging repeat visits.

The Spokane Convention Center completion project, along with the new hotel property on Spokane Falls Boulevard, will reposition the city as one of the most attractive destinations in the Northwest. Building on a well-established record of success, this transformational project sets the stage for continued growth.

Rafael Viñoly-Menendez is a partner at LMN Architects and Jeff Warner is a principal at ALSC Architects.