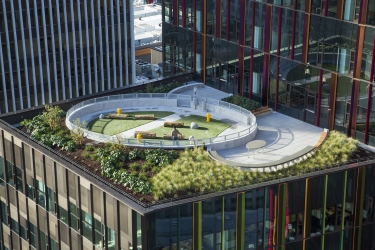 Photo from NBBJ [enlarge]
A dog park is on the 17th floor of Amazon’s Doppler Building.

When technology companies such as Amazon and Apple roll out plans for a new campus, architects, engineers and landscape designers must come up with cutting-edge solutions.

That's because tech firms that make grand statements with their products want buildings that symbolize their futuristic visions.

These days, leading design firms such as NBBJ have added an essential team member to their line-up for tech-building design: horticulturists who advise on green roof designs.

Matt Wood, a principal with the Seattle landscape architecture firm SiteWorkshop, said horticulturists are critical to the success of any green roof project.

While structural engineers were working through the challenges of designing 95-foot-tall glass spheres in front of the new Amazon building in Seattle's Denny Regrade neighborhood, Wood was busy analyzing the perfect balance of pumice, organics and sedums that will make up several green roofs on the Amazon project.

A horticulturist, Wood said it has taken decades of trial and error for green roof experts to refine the systems to meet clients' goals for attractive spaces while also functioning property.

“A lot of the green roof systems are reasonably similar these days, so at this point it's kind of a matter of dialing things in and refining the growing media,” Wood said. “Growing media” refers to soil foundations used to grow plants, trees and shrubs.

As green roofs have evolved, horticulturists and landscape architects have had to work through the challenges of balancing mineral contents in soil with silt, clay and pumice so that green roofs don't become a host to weeds and create maintenance issues for owners, while also calculating hydrological issues so the roofs perform perfectly as they manage stormwater runoff, Wood said.

Greg Love, chief operating officer of Columbia Green Technologies in Portland, said his company uses hydrology software to calculate the percentage of stormwater that a green roof can handle. 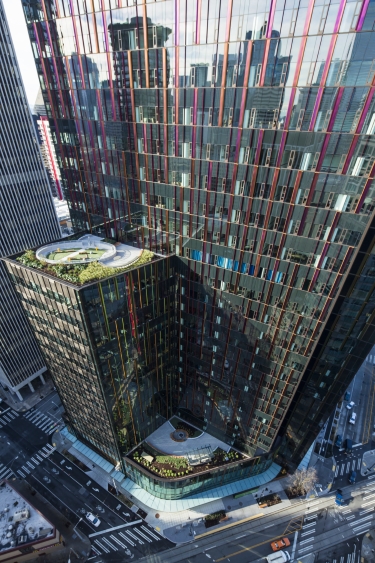 Columbia Green Technologies is a supplier of materials for green roofs and worked with SiteWorkshop on the Amazon campus green roofs project. Along with the green roofs, the project includes a dog park on the Doppler Building's 17th floor.

“Amazon wanted to make a statement,” Love said, referring to its use of green roofs at Amazon's Doppler and Meeting Center buildings. “The big orbits (spheres across the street from the buildings) have forests and trees and unique plants inside. They wanted to take that theme into the entire building and use the green roofs to make an outward statement.”

Love said green roofs are growing in popularity because “people want to be in a green work environment and be exposed to air and greenery.”

While SiteWorkshop does green roof designs, Love said his company's team of landscape architects and horticulturists contribute with appropriate plant selections to determine “what kind of green roofs our customers want.”

As green roof systems have evolved in the last 20 years, Love said clients are looking for designs that go well beyond the simple function of reducing stormwater on their buildings.

“What Amazon is doing is they're taking green roofs to the next level — not just stormwater management,” Love said, “but making the roofs a sustainable part of the building design to promote healthy living and bringing the outdoors into the workplace.”

While Columbia Green Technologies provides the green roof systems and SiteWorkshop does the designs, it's up to firms such as Pacific Earth Works to install the roof systems.

Working with general contractor Sellen Construction on the Amazon buildings in downtown Seattle, Pacific Earth Works is charged with moving tens of thousands of pounds of soil and plantings onto the rooftops.

“Getting the product to the rooftop location: that's the No. 1 issue. No. 2 is, once we get it there, where do we store all the stuff?” he said. “That's because there's load limits on structures, and on a roof with steel beams you can't just put all the dirt in one location. You have to make sure you know what the load limits are and put the soil where the roof membranes have been water tested.”

To meet those challenges, Curcio said his firm works closely with general contractors, architects and landscape architects. Designers sometimes use foam as filler on green roofs to take up space where soil is not needed and reduce weight on the roof.

But Pacific Earth Works also must meet the challenge of coordinating the movement of soil loads that weigh 8,000 pounds for each crane lift.

“The key to green roof installation is hoisting,” he said. “It's all about when the tower crane comes down, because once it's down there's no way to get the soil and plantings up there.”

Working with general contractors on scheduling unloading of the soil by the main tower crane can be a challenge in a setting like Amazon's buildings in downtown Seattle, he said. 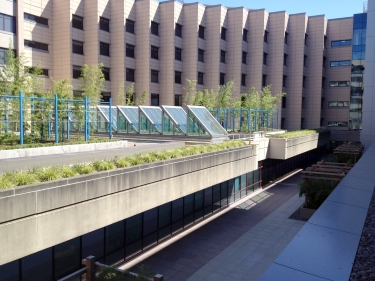 On smaller jobs, Curcio said his firm can use mobile cranes for unloading. “It's a tremendous team effort (whether the job is large or small),” he said.

Once the materials are on the roof, Curcio said his company must also “anchor our products, because the weather and wind really affect what we put down there. There's a really big learning factor to what we do.”

One of Pacific Earth Works' most challenging jobs was the University of Washington Medical Center expansion, which involved installation of a green courtyard on an existing nine-story building.

Wood said the learning curve for green roof systems has been steep for green roof experts as they have explored what works and what doesn't. With a couple decades of improvements behind them, designers have homed in on systems that live up to expectations.

“Early on, there were a number of green roof projects that were not entirely successful — some had to do with drainage issues and some had too much organic matter, causing issues with weeds,” he said. “Green roofs got a bad name and owners were reluctant to install them.”

But he said designers have ironed out many of those issues and “the industry seems to be settling into a more-or-less mature state.”

Wood said Seattle, in particular, has plenty of projects with green roofs. “But, there aren't as many green roofs in Seattle as other parts of world,” he said.

Indeed, for Columbia Green Technologies, a vast majority of its work is centered on the East Coast and Chicago, according to Love.

Though Seattle is an epicenter for sustainable development, Wood said in the green roof sector Germany has led the way with early adoption and technological advances.

The German Landscape Research, Development and Construction Society (FLL), founded in 1975, released the “Guidelines for the Planning, Execution and Upkeep of Green-Roof Sites” in 2002 — guidelines that Wood said set high standards for green roof design worldwide.

“(FLL) developed the standards that almost all firms use,” Wood said.â€©One reason Germans have led the way is that green roof design research receives much more federal funding in Germany compared with the United States, he said.

Ben Eiben, a principal with the Baltimore firm Surface, which specializes in green walls, said a key to healthy green roofs and walls is “media analysis” of the soil.

“There are plenty of little tricks to encourage successful installations to mature and maintain their design intent,” said Eiben, who has consulted on the maintenance of more than 1 million square feet of green or vegetated roofs on the East Coast.

“One key element that is often overlooked but is keenly important is yearly or bi-yearly media analysis,” he said. “Expertise is required to choose a slow-release nutrient source that replenishes deficient nutrients without promoting nutrient runoff.”

For Curcio, the net effect of green roof adoption is happier clients and building tenants.

“The nice thing about our job is tenants actually see the end result of what we do,” Curcio said. “They can use the green roofs and it actually benefits the tenants. Green roofs are more livable, people friendly and warmer. It's much better to be around plants than concrete.”