Point Ruston is a 97-acre mixed-use site situated on nearly a mile of Puget Sound shoreline near downtown Tacoma. Standing in the footprint of the old Asarco copper smelting plant, Point Ruston is being redeveloped into a scenic Built Green neighborhood with apartments, condominiums, restaurants, retail, entertainment and public space.

Early phases have been completed, but plenty of work remains. Projects under construction include a 180-room Silver Cloud hotel and the Baker, which will bring 178 new apartments and condominiums. More buildings are scheduled to open in 2018.

Point Ruston hopes to cultivate this South Sound neighborhood into a top destination in Washington state for those seeking an urban setting but also a scenic and relaxing place to live, play and shop.

The property was first developed into a lead smelting facility 128 years ago, in 1888. In 1905 the smelter was sold to the American Smelting and Refining Co. (Asarco) for $5.5 million. Asarco would then expand the facility after switching from lead to copper smelting.

Through the process of refining copper, much of the leftover slag was dumped into the adjacent bay, creating a 23-acre peninsula where Asarco built additional facilities. The plant created so many pollutants and byproducts that a majority of the site was used to sort and prepare the leftovers for shipment. 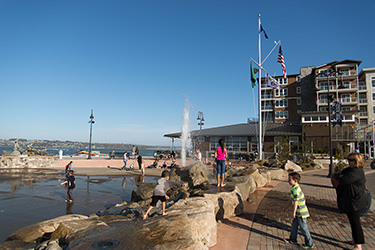 Photo by Cody Finney [enlarge]
Children gravitate toward the spraygound in Point Ruston’s Grand Plaza. The 135-unit Century building, which opened in 2015, is in the background.

It wasn’t until 1983 that the Environmental Protection Agency would declare the Ruston smelter site part of the Commencement Bay Superfund site, kicking off a long cleanup process. In 1993 came the demolition of the historic 571-foot-tall smelting stack, once known as the tallest brick smoke stack in the world.

The site was put up for sale in 2005 after Asarco filed for bankruptcy. The company lacked the finances to finish the cleanup, so it was forced to turn over the property to someone who could finish the job.

After competing with around 40 other bidders, Point Ruston LLC finalized purchase of the site in 2006 — entering into an agreement to buy the smelter property and take responsibility for the completion of the remaining elements of cleanup.

Point Ruston began redevelopment in earnest, working to design and permit its master plan, including a final site-wide remediation plan approved by the EPA.

Concurrently, Point Ruston began construction on a 36-home subdivision on Stack Hill, where Asarco’s brick smoke stack once stood. The picturesque neighborhood was completed in 2009, amid the Great Recession.

In 2012, Point Ruston opened the Waterwalk, a nearly mile-long public pedestrian trail system along Commencement Bay. The walk includes property between the Ruston waterway and the Point Defiance Zoo and Aquarium that had been closed to the public for over 100 years.

New housing construction took a leap forwards in 2013 with the completion of the Copperline, with 173 apartments and 44 condominiums.

The second phase of development began in 2015 with the grand opening of the Century building, which would add another 95 apartments and 40 condos, as well as approximately 55,000 square feet of retail space. The same year, the commercial space in the Copperline was fully leased to an array of tenants including cafés, restaurants and a Northwest Fitness Center. A state-of-the-art, nine-screen cineplex also opened, allowing residents and visitors to see the newest 3-D movies.

The Grand Plaza at Point Ruston was also completed in 2015. The plaza is a place to enjoy the scenery, relax between bike rides, or enjoy a meal with a view. A water fountain, public art, playground, and the nearby Waterwalk highlight the surrounding area.

Restaurants near the Grand Plaza offer something for everyone, from upscale dining to casual bistros, sports pubs and intimate cafes. In the future, the Grand Plaza will expand to play host to community activities, such as art walks, farmers markets and special neighborhood events.

Onsite garages provide a total of 1,356 parking stalls for visitors, ensuring that as the waterfront community grows there will be ample room for parking.

After the completion of the Baker apartments and condominiums next year, the remaining phase will open by 2018. The projects are anticipated to include 415 additional residential units, a locally owned grocery store and 150 assisted-living units. The Silver Cloud hotel is also slated to open in 2018.

The Point Ruston development has rewritten the fate for this once-polluted site, allowing it to flourish as a vibrant mixed-use community with a variety of housing, retail and public spaces. The neighborhood will continue its transformation as it grows and breathes new life into the Puget Sound waterfront.

Dalton Cole is a marketing coordinator at Point Ruston. He received his bachelor’s degree from Evergreen State College in 2015.