An urban park entices Tacomans back in the water

Not long ago, industry alone occupied the Thea Foss Waterway shoreline in Tacoma. Since they were designated Superfund sites by the Environmental Protection Agency in 1983, the waterway and Commencement Bay have been transformed into places where cultural, recreational and residential amenities coexist with remaining industrial uses.

As part of this urban evolution, Metro Parks Tacoma and the Foss Waterway Development Authority identified a building and site at the southern end of the Thea Foss Waterway for use as a center for human-powered watercraft. After over three decades of environmental effort, Tacomans are getting into the water again.

The subsequent remediation of sites along the waterway opened sites for residential and commercial development, and recreational opportunities in floats, ramps and boating facilities.

The shoreline site of Foss Waterway Park is at the southern end of the waterway, bounded by Dock Street and East D Street in the shadow of the East 21st Street Bridge.

The site has been partially remediated, capped with clean sediments to keep the contamination in place. Access to the water is limited to an existing dock: Due to risk of disturbing contaminants, new driven piers are prohibited. To remediate the remainder of the site and locate construction above the base flood elevation, grade will be raised three feet uniformly across the site.

The two offset buildings frame an open green space, providing lay-down area for boats, as well as public event space. Running north-south through the site, a “waterway esplanade” links the buildings, expanding to a boat wash and staging area, and reconnecting to a pedestrian stair from Dock Street.

A steep embankment along Dock Street defines the southwest corner of the site. An electrical easement requires this area be kept clear, lending itself to a meandering trail through native plantings and tree cover. 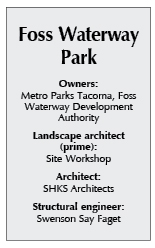 The existing warehouse is a simple, heavy timber-framed structure, nearly three times as long as it is wide, with a large volume of clear floor area running in both directions.

Reuse of the warehouse — rather than demolition and new construction — enables storage of the long and often unwieldy eight-person rowing shells, oriented along the east side of the rectangular building. Single, double, and quad boats are distributed on racks along the remainder of the building with locker rooms and amenities towards the south end.

Wide, glazed overhead doors open to the north, near the boat launch. New glazing at the perimeter of the building allows for views through the building, affording glimpses of the exquisitely tuned racing shells inside, and offering a visual symbol of recreation from the water.

In contrast with the timber-framed boathouse building across from it, the boat storage building will be a steel-frame structure with woven wire mesh skin, maintaining a high degree of transparency through the building and across the site.

Transformation of the existing warehouse building into a boathouse will maintain the visual character of Tacoma’s history along the waterfront while serving the needs of the expanding local recreational community.

A collaborative process between the design partners and the community identified potential user groups, who generated a building program.

Through a series of public meetings and surveys, both quantitative and qualitative information determined operational needs, balancing the competing desires of stakeholders.

The proposed boathouse and boat storage building provide open, flexible space to accommodate local user groups’ identified storage and event space needs. The buildings will be clad in wood and metal materials, maintaining a contextual connection to the surrounding buildings, while enhancing visual connections from Dock Street to the waterway, and providing a lively environment for boaters and pedestrians.

Recent economic reinvigoration and renewed development interest in downtown Tacoma have highlighted the Foss Waterway as an area rich with potential to preserve local history while providing opportunities for recreation, education and continued economic development.

Together, the adaptive reuse of an existing building and formerly blighted landscape with a new building and site intervention will contribute to the transformation into a vibrant place for public recreation on the waterfront, providing an example for future development.

Hannah Allender is a project designer and David Strauss is a founding principal with SHKS Architects. SHKS focuses on the sustainable renovation, repair, and adaptation of buildings and sites for contemporary use.