Jacobson lines up 7 priorities for the AGC

Jake Jacobson said he wants to focus on seven things as the new president of the Associated General Contractors of Washington to achieve his overarching goal: “Leave it better than we found it.”

Here are his seven priorities:

• Workforce development. Jacobson said the AGC chapter will soon unveil a new website that promotes construction careers. He said workforce development is critically important because there won’t be enough people to build upcoming projects. “Here’s a career that pays well and offers upward mobility,” he said. “Those jobs will never be outsourced.”

• Government affairs. Jacobson said the AGC has been working with the state Department of Labor & Industries on the sick leave measure that goes into effect next year. He said three cities — Seattle, Tacoma and Spokane — have different sick leave rules in place and that can be a compliance headache for contractors operating in those cities. A single ordinance would be best, he said. “The devil’s in the details in this one.”

[enlarge]
Osborne Construction was the design-build contractor for this $246.6 million military housing project at Eielson Air Force Base in Alaska.

• Safety. The AGC will continue to work with L&I and OSHA to make construction safer. “This is one of the safest places in the country to work, maybe the safest place,” Jacobson said.

• Future Leadership Forum. FLF offers younger workers education programs such as foreman training, and seminars on how to get along with your boss and what the future holds for the industry. FLF has about 600 members. 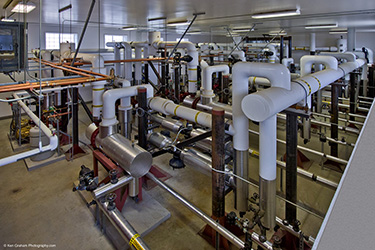 Photo by Ken Graham Photography [enlarge]
A central heat distribution system at Eielson uses byproduct steam from the base to heat a water/glycol mixture that is sent through a utilidor network to the homes.

“It’s very frustrating for us as employers,” he said, adding workers are so scarce that there’s already a big emphasis on keeping them healthy and safe.

An eyebrow-raiser is a bill in the Legislature that would restrict employers from denying employment to workers using medical marijuana. Jacobson said this would be dangerous in construction because workers operate bulldozers, cranes and other heavy machinery.

“These are the kinds of things that challenge our industry and fly in the face of common sense,” he said.

On a national level, there are concerns about crumbling infrastructure. Jacobson said governments will have to tear down instead of fix infrastructure if they drag their feet on maintenance. “We need to get those things fixed,” he said.

Jacobson graduated from Princeton University with a degree in politics and then served in the Navy for 10 years, where he became the junior commanding officer for the entire Navy. He later obtained a law degree from Stanford University and worked at Oles Morrison law firm before becoming a partner at Stanislaw, Ashbaugh, Chism, Jacobson & Riper. His focus was on construction and government contracts.

After practicing law for 20 years, Jacobson in 1987 was asked to join start-up Osborne Construction by then-client George Osborne. He is now executive vice president at the firm.

Jacobson said working in construction has been the most rewarding thing he has done and serving as AGC president is a chance to give back.

Jacobson golfs, gardens and travels in his spare time. He said he also guides young people who are facing life decisions.

Jacobson hands out a card to people he interacts with as a volunteer that has this quote from Nelson Mandela:

“What counts in life is not the mere fact that we have lived. It is what difference we have made to the lives of others that will determine the significance of the life we lead.”

“I try to make a difference in everything I touch,” said the 73-year-old Jacobson. “I hope I will have made a positive difference in this industry.”