AGC of America CEO looks at Trump’s impact on contractors 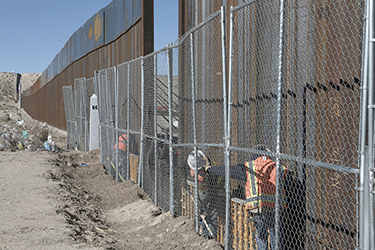 AP Photo/Christian Torres [enlarge]
Workers are building a taller fence at the Mexico-U.S. border separating the towns of Anapra, Mexico, and Sunland Park, New Mexico. Most of President Trump’s border wall would be built in Texas.

AGC of America CEO Steve Sandherr was in Bellevue Friday to kick off the local chapter’s annual meeting, and he talked about what contractors can expect from President Donald Trump’s administration.

The DJC spoke with Sandherr about this, and his answers are here edited for style and length.

Q: What do AGC members think about Trump?

A: President Trump broke all the conventional rules in getting elected: raised little money; had little organization/staff; and had broad policy objectives (tax reform, infrastructure, immigration) without any details. However, many of his appointments are the type we would have expected from a conservative GOP president. These picks demonstrate he is looking to get things done and they have calmed the nervous D.C. establishment.

We also know that he is not to be underestimated and that he is full of surprises.

Candidate Trump talked about a 10-year plan with $10 trillion in new spending.

The President and GOP leadership in both the House and Senate are in agreement that we need to enact corporate tax reform to make U.S. firms more competitive in international markets.

There may also be an opportunity to achieve immigration reform. Past attempts to pass reform in both the Bush and Obama administrations fell short, to some degree because immigration hardliners did not believe the proposals adequately addressed border security. No one can argue that Trump will be lax on border security and that is where the opportunity may lie. If Congress enacts a strong border security bill, it may be possible to get earned legal status for people who work in our industry without proper credentials.

The new administration presents a great opportunity to identify bad policies and regulations, and to withdraw them or amend them. There is a mechanism known as the Congressional Review Act that empowers Congress to effectively veto rules that are implemented at the end of an administration. We are working with congressional leadership to roll back some of these actions with this tool. We are also hopeful that President Trump will reverse the position the Obama administration took on regulations that have been challenged in federal court and are subject to appeal.

Q: What are some regulations the AGC wants to abolish?

A: We have actually identified a significant number of federal regulations that we would like to see the new Trump administration eliminate or alter. Here is a link to the comprehensive list: http://tinyurl.com/AGC-MakeFedResponsible.

In particular, we would like to see the new administration embrace a new approach to silica regulations that actually deliver significant health and safety improvements. Unfortunately, the prior administration put in place a measure that, by setting unrealistic targets, will do little to help protect workers.

We would also like to see the new administration repeal the executive order and regulations relating to the Obama administration’s blacklisting rule, which opens the door to having federal officials punish contractors for their political leanings instead of for their actual performance record.

Q: Are there enough workers to build Trump’s infrastructure plan?

A: We have been working with the Trump administration to make a strong case that any new infrastructure program should also be paired with new workforce development measures to ensure that we have enough qualified workers to keep pace with demand.

That plan — at http://tinyurl.com/AGC-RebuildWorkforce — calls for boosting funding for career and technical education programs, making Pell grants eligible for technical training, and making it easier to set up construction training programs.

More important, by giving construction a starring role in rebuilding our economy, the Trump administration could help highlight that construction offers a high-paying career that more folks should consider.

Q: Could some sectors be hurt by Trump?

A: The one construction sector that could potentially be at risk with the new administration is hospital construction. Given the uncertainties facing federal health care policy over the coming months as Congress and President Trump work to replace the Affordable Care Act, it is safe to assume that many hospitals and other health care providers will put planned projects on hold, at least until the issue is resolved in Washington, D.C.

A: Seattle is among the most robust construction markets in the country at this point. Construction employment throughout Washington state, and in the Seattle area in particular, is growing at a faster rate than in the rest of the country. This is part of a broader trend where many coastal cities have experienced faster rates of growth than other parts of the country.

The Seattle area has also benefited from growing demand from firms like Boeing, Amazon, Microsoft and Costco for new factories and facilities. In addition, a number of local infrastructure projects, including work to replace the Alaskan Way Viaduct with a tunnel, is boosting demand for construction services in the metro area.

In short, it is good to work in construction in the Seattle area.