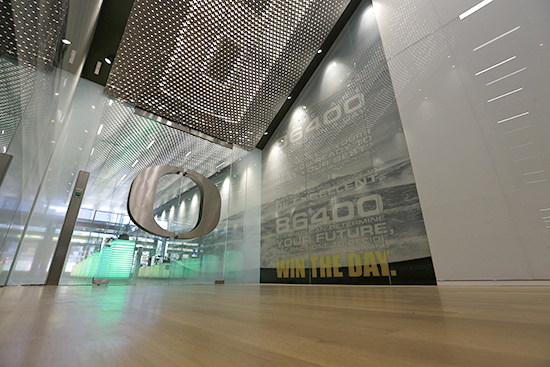 The Marcus Mariota Sports Performance Center, located in Casanova Center at the University of Oregon, is a cutting-edge facility for studying sports science, performance, medicine and technology.

This 29,000-square-foot project used several custom ceiling elements. Over 500 specialty metal panels were laser cut in the shape of a flying V duck pattern to form the Marcus Mariota face and jersey. The panels were individually measured, designed, engineered and produced. Since the panels also provided radiant heating, they were shipped to Connecticut for radiant plumbing, then shipped to the jobsite.

The 2-by-8-foot panels were pre-assembled like pieces of a puzzle. Custom border panels used clips to cantilever over the edge and conceal LED backlighting.

The center includes the Resting Room, a warmly lit space with five sleeping pods where student-athletes can rest between practices. A Starry Night ceiling uses the flying duck pattern to simulate a sky full of stars. The wall fabric is CNC-cut wool felt in the shape of the school logo and hand-applied to create a three-dimensional effect.

The challenges associated with such special materials were long lead times, painstaking ordering processes, intense quality inspections and intricate installations — all on a tight schedule for completion by June 2016.

Judge’s comment: “This isn’t your standard drop ceiling. This is high design and intricate precision using a series of separate and different systems. All we can say is: Wow!”