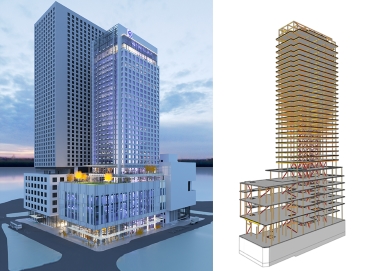 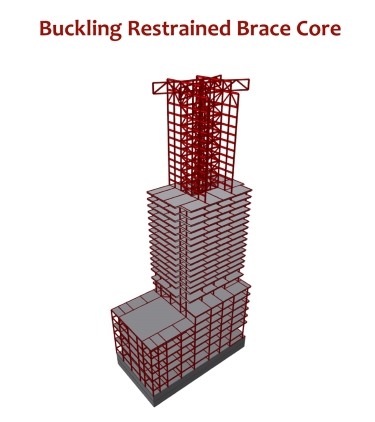 [enlarge]
The building will have four outrigger braces at the roof, with a fluid viscous damper in each brace.

For structural engineers like Mark Whiteley, a senior principal with Cary Kopczynski & Co. of Bellevue, the winds whipping around Seattle's skyscrapers are not unusual.

“The winds here are not any worse than most places in the country,” said Whiteley.

But for his newest project, the Ninth & Howell Hotel in downtown Seattle, Whiteley is paying close attention to wind effects on the 34-story tower.

The tower design already has undergone wind tunnel analysis in order to help Whiteley and CKC engineers understand the wind loads on their structural design.

The hotel is in the design development phase. Whiteley said a core objective of the developer, Seattle's R.C. Hedreen & Co., is to have the hotel built quickly so as not to disrupt the nearby Hyatt Hotel.

“The dampers slow down the building motion to control perceptible accelerations” caused by winds — essentially, controlling the usual sway that would come with heavy winds, he said. “We will have four outrigger braces at the roof with a damper in each,” he said.

The buckling restrained bracing system and dampers will work “together as one system,” he said.

By using the buckling restrained bracing system, the building's structure will go up twice as fast as a conventional concrete core building, while using less concrete and steel. Floors of the hotel will incorporate lightweight concrete to reduce seismic and gravity loads on the structural frame and foundation.

Despite the time-saving measures and shorter building-erection time period, Whiteley said the system provides the same structural capacity/reliability as a concrete core building.

“We're going to provide the same structural integrity to meet all building code requirements,” he said. “It's not going to be any different than any other building as far as structural capacity/reliability.”

Whiteley said the buckling restrained bracing system has been used on high-rise projects in California and Utah, but the Ninth Avenue hotel will be the highest that he has seen.

“This would be the first time we've used it on a building this tall,” he said.

A key to making the building lighter is eliminating the concrete in the building core, since the core of any large concrete building can make up approximately 35 percent of its total weight.

But, when designing a “lighter” building, Whiteley said finding enough stiffness is the key to controlling the effects of the wind on the building.

While he said one solution would have been “to use more steel as part of the frame,” it made more sense to use the buckling restrained braces with dampers. “The cost is much more advantageous to add dampers, compared to adding the extra steel,” he said.

“Installing these braces,” Whiteley added, “is a pretty quick way of getting the structure up.”

The Ninth & Howell Hotel, designed by MZA Architecture of Bellevue, does not yet have a general contractor. Construction is due to begin in April 2021 and be complete in October 2023.