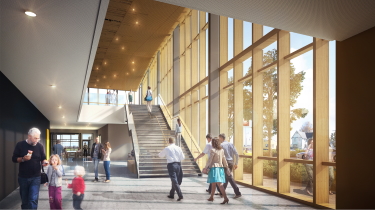 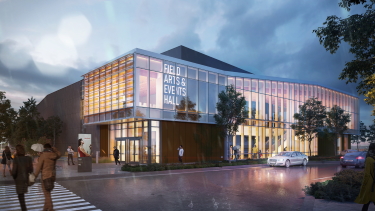 [enlarge]
The center will be part of a larger waterfront development that includes a marine discovery center and tribal cultural center.

The Olympic Peninsula city of Port Angeles has always taken pride in its dramatic views of the Olympic Mountains and the Strait of Juan de Fuca.

But at the Oct. 18 groundbreaking for the Field Arts & Events Hall, local officials showed that they, too, have a flair for the dramatic.

Foregoing the usual daytime ceremonial dirt shoveling, officials and local residents marked the pivotal moment with a nighttime groundbreaking — complete with Hollywood spotlights, a champagne toast and an excavator.

In Port Angeles, whose city motto is “Where the Mountains Meet the Sea,” the new Field Arts & Events Hall will showcase the arts and host conference goers in a facility created to highlight the area's natural beauty.

“We made an early decision to create a flexible building, but with the caveat that the design must capture vistas of both the Strait of Juan de Fuca to the north and the Olympic Mountains to the south,” Fidler said. “LMN managed to create a highly effective and holistic design that is both appropriate for the organization and conditions on the site.”

The $34 million project will have a 500-seat auditorium and 300-seat conference center.

Spurred by a $9 million gift from the late Donna Morris of Port Angeles to create a performing arts center, the development will eventually incorporate a marine discovery center and the Lower Elwha Klallam Tribe's Cultural Center — all three structures on waterfront land adjacent to the Port Angeles ferry terminal.

The 40,140-square-foot center will have a multipurpose performance hall designed with an acoustical environment and theatrical systems to accommodate orchestral music, dance, dramatic theater and amplified music events and festivals, according to LMN design partner Wendy Pautz.

Pautz said Field Hall will be “rooted in a place where you can experience both the water and mountains. It's designed to be reflective of its striking, natural surroundings.”

Using wood from the Northwest, Pautz said the facility's design will be “referential to water hues and patterns, the interior spaces feature organic textures and blue and gold colors, reminiscent of light reflectivity and the changing nature of water.”

The hall will also have a coffee shop and art gallery.

Fidler said the development has created interest in other Port Angeles building projects as well, including a 100-room hotel a block from Field Hall and a 70-unit condominium project with retail, a seafood restaurant and 300-stall parking garage.

“We are in an extremely competitive and busy construction market, and pricing continues to rise,” said Palmer. “Being in a location that's less central from the epicenter of trade partners makes that challenge an even more important focus.”

She said Mortenson will take advantage of local materials, such as wood and local contractors as much as possible. “When it's available, we will source materials locally from the peninsula,” Palmer said.

“Many materials are not available locally and will have to be transported to the area, but we're already planning to buy rough carpentry lumber and miscellaneous supplies locally, and work with local companies for temporary toilets, construction equipment, construction supplies, dumpsters and other items,” she said.

The initial donation by Morris in 2016 inspired local arts patron Dorothy Field to donate the last undeveloped parcel of waterfront property in Port Angeles to be the site of the performing arts and events center. Within two years, the Port Angeles Waterfront Center — a nonprofit organization which owns and is overseeing the project — invited other organizations to join in the development, according to Fidler.

“Our timeline has actually been marked by exceptionally good fortune so far,” said Fidler. “We were able to secure a tremendous waterfront site right out of the gate. Having control of the site allowed us flexibility to invite other organizations that offered missions compatible to our own; in this case the Marine Discovery Center and the Lower Elwha Klallam Tribe's Cultural Center.”

Having also designed Benaroya Hall, McCaw Hall and the Washington State Convention Center expansion, LMN approached the Field Hall design with the goal, in part, of showcasing the city's views of the strait and mountains.

“The flexibility of the building program, in conjunction with the clear interior circulation and expansive views of the city and the waterfront, create a welcoming environment for all and aspires to create a new sense of place for the community,” Pautz said. “The unifying strategy for the whole project is the consistent introduction of natural light, and the establishment of visual corridors with views to the Strait of Juan de Fuca and the Olympic Mountains.”

Fidler said Field Hall will serve the arts and be an economic boon to the community.

“Our design priorities were really threefold: offer a right-sized state-of-the-art performing arts space to our community, combine that with related revenue-generating activities that will support overall operations, and place it all in a building that truly captured the sense of place offered by a terrific waterfront location and mountain views,” he said.

Field Hall is due for completion in 2021.