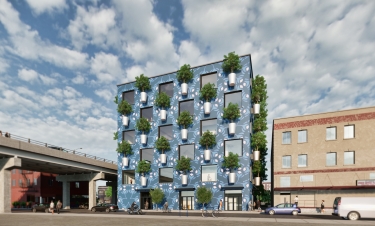 Rendering courtesy of Brett Schulz Architect [enlarge]
The Tree Farm building will have 56 trees in planters attached to its four sides. 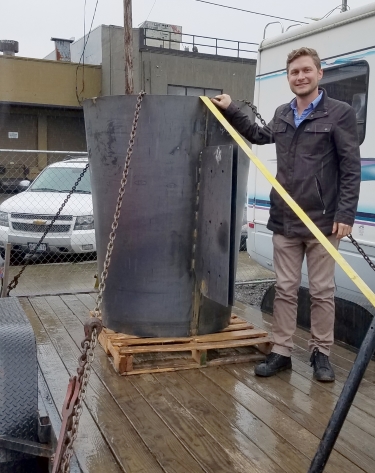 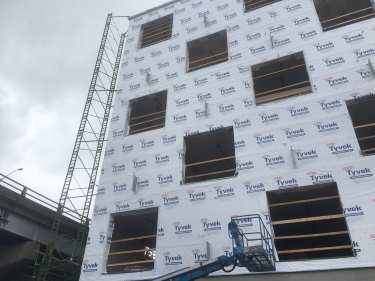 Photo by Sam Bennett [enlarge]
The Tree Farm’s proximity to the Morrison Bridge, at left, required the design team to work with county and fire officials on safety measures.

For the six-story Tree Farm under construction in Portland, however, having an arborist during the initial design phase was essential.

The 41,450-square-foot building will have 56 carefully selected trees growing in planters attached to its facades.

The developers, Guerrilla Development with Alta Urban Projects, wanted to spruce-up the traditional spec office building design by adding the most quintessential of all Northwest symbols.

“A big part of the project is showing that you can create an iconic building without breaking the bank,” said Ben Carr of the Portland architecture firm Brett Schulz Architect, who designed the project. “This is a building that will contribute to the local design conversation. Even though it's only six stories, you will be able to see it from across town and it will be instantly recognizable.”

Carr said he hasn't seen a design of this type done for a spec office building in the Northwest. But going out on a limb, architecturally or artistically, is not unexpected in a city whose unofficial motto is “Keep Portland weird.”

The custom galvanized steel planters containing strawberry trees will set the Tree Farm building apart from recent buildings whose facades or rooftops are carpeted with vegetation.

On the advice of local arborist Sean Hogan with Cistus Nursery, the design team selected the strawberry tree because it is evergreen and doesn't shed leaves, produces only small fruit, resists airborne pollution, can grow in the sun or shade and is drought-resistant. Each planter, when filled with soil and fully saturated, will weigh 3,000 pounds.

In recent years — as Portland's central east side has become a hub of multi-use development due in part to recent city up-zoning — developments adjacent to the city's bridges have become more common. One of the largest developments is The Yard, an apartment tower containing a terrace within a stone's throw of the Burnside Bridge.

For its proximity to the Morrison Bridge, the Tree Farm's tree-lined facades drew additional design scrutiny — getting the attention of the fire marshal's office and county officials who oversee bridge maintenance.

“There have been many issues associated with this project that I've never come across as an architect,” Carr said.

Prior to designing the Tree Farm, for example, Carr said he hadn't heard of snooper trucks. Because the building is adjacent to the multi-lane on-ramp of the heavily used Morrison Bridge, the county worked with Carr and the design team to ensure that the strawberry trees do not interfere with the booms of the snooper trucks that periodically inspect the bridge's underside for corrosion.

The design team had the added pressure of advancing the tree-filled facade concept through the permitting process at the same time the Eagle Creek Fire was burning 48,000 acres in the Columbia Gorge (threatening the historic Multnomah Falls Lodge) for three months in the summer of 2017, Carr said.

The Tree Farm incorporates feedback from Portland Fire & Rescue on how to mitigate the risk of the trees catching fire.

“The whole process of drawing the design up and getting building permits took over a year because there were a lot of restrictions based on the location, and the unusual aspect of the trees” adjacent to a busy bridge connecting downtown to the east side, he said. “The city of Portland was a great partner and had a collaborative attitude.”

Working with WDY Engineers, the team came up with a system of steel posts that hold the planters and shift their loads to the building's floor frames.

To water the trees, the building has a dedicated drip-irrigation system using a network of pipes running through the exterior walls, as well as a fertilization tank.

In addition to the tree planters, all four sides will have murals. The planters, while adding an iconic look to the Tree Farm, will provide passive cooling to the facades and provide solar shade for office workers.

Offering distant views of tree-lined hills to the east and west, the Tree Farm delivers a cutting-edge design while also highlighting “the importance of trees to the unique identity of Portland,” Carr said.

The trees will be hung on the building this month. The general contractor is Pro-Teck Construction and the project will be completed this fall.