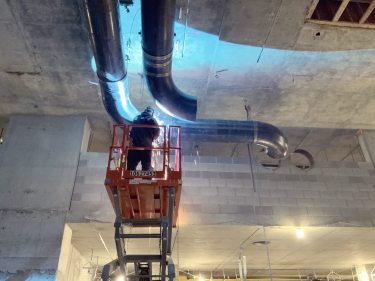 Photo from UMC [enlarge]
UMC is installing mechanical systems for an Onni Group tower on Denny Way in Seattle.

UMC is beginning its 100th year on a high note. With more than 500 employees serving the Northwest's largest companies, UMC has come a long way since its inception in 1920 as a small plumbing shop in Seattle.

UMC CEO and President Jerry Bush said the decade-long economic expansion has been a boon to his business while also presenting challenges.

“At times it looks like a feeding frenzy,” said Bush. “Our focus and challenge is primarily centered around leveraging the good market for growth, while staying true to our capacity to provide our services in the ‘UMC Way.'”

New technologies to design its plumbing and mechanical systems, as well as technology to make the business run smoothly, have been keys to success, he said.

“We found that the off-the-shelf packages didn't meet our needs, and/or they would require UMC to change our processes to fit into the package,” he said. “This system has helped us streamline the construction process and communication with our customers throughout a project.”

UMC has used 3D modeling since the 1990s, among the first in the nation to do so, according to Bush. “Creating 3D models has helped to equalize this ability and evolve the use of models for coordination and reduce problems in the field,” he said.

UMC needed such technology to handle the workload of recent Seattle projects such as the Amazon Spheres and Federal Center South.

Working with Sellen Construction, UMC was able to install the most efficient systems.

“The team pushed the envelope to bring the utmost in mechanical system sustainability to this building,” Bush said. “Federal Center South was designed with components and system operations that were way ahead of curve, and the result was one of the most energy-efficient facilities in the country.”

UMC operated the Federal Center South building for a year after it was occupied, primarily due to the complexity of the systems and the transition of the facility to the government, Bush said.

UMC performed the plumbing and mechanical work for the Amazon Spheres. The company's modeling technology and processes were important for the design and construction process, Bush said, adding that the Spheres' unique horticulture environment required extensive collaboration, experimentation and testing.

“Years before the project began, we built a mock-up greenhouse for R&D work on design scenarios and concepts,” he said. “Consulting with horticulturists, we refined our design so when the plants showed up on day one, we were highly confident the 400 diverse species would survive. The project team's creativity and thoughtfulness paid off.”

UMC's involvement with marquee projects such as the Spheres is nothing new for the firm.

In 1961, UMC performed the plumbing and mechanical work for the construction of the Space Needle. For this, UMC called on one of its retired employees, Tinney Scott, who had been a pipefitter on the Alaska–Yukon–Pacific Exposition project in 1908 and 1909.

The Space Needle project was completed in only 400 days from the groundbreaking to opening, Bush said.

UMC's humble beginnings trace back to two pipefitters: brothers Frank and William Granston, who purchased a plumbing shop in 1920 called University Plumbing & Heating. They were later joined by brother J.H. “Harry” Granston. Over the years, other Granston family members led the company.

In the 1960s, the firm's name changed to University Mechanical Contractors. The Granston family owned the company until the mid-1990s. At that time, they formed UMEC Acquisition Co. to allow for reorganization to an employee ownership group.

Being diversified has helped UMC weather the local economy's ups and downs.

“We have a diverse group of business units that often correlate differently to the economy,” Bush said. “The industrial sector may carry on through a downturn, while the commercial sector slows. With industrial, energy services, facility services, support services, building automation, manufacturing and commercial business units, we typically see some level of non-correlation, which lends to resilience in the business.”

“The key challenges are managing our workload to a level that doesn't impact our quality delivery or our improvement and technology initiatives,” Bush said. “UMC has such a great team. I enjoy the interaction, collaboration and solving challenges with the team.”