Fire dampers: one more way hospitals can save lives

Fire dampers save lives. This is particularly true for facilities catering to vulnerable populations, including hospitals where many patients are non-ambulatory.

Statistics show that approximately 70% of all building fire-related deaths are associated with smoke inhalation and that most victims are not located in the same room as an active fire.

The International Building and Fire Code requires inspections of fire dampers, smoke dampers and combination fire/smoke dampers to be made one year after installation at any facility type, and again every six years in hospitals (every four years for other building types). Studies show that on average 55% of all inspected dampers fail within the first 10 years due to building settling, tenant improvement work that alters surrounding areas, or expansion and contraction of the damper’s metal components.

• Locate and operate (actuate) all fire and smoke dampers in the facility.

• Remove and reset the fusible link (where possible) to verify the damper fully closes.

• Provide a detailed report of each damper’s operational status. 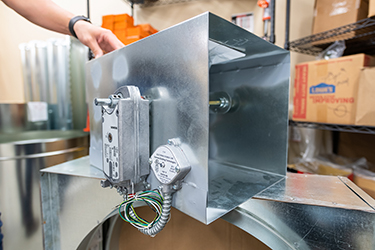 Photos by Jason Heritage [enlarge]
On average 55% of all inspected dampers fail within the first 10 years due to building settling, tenant improvements and other factors.

As the city’s largest hospital, MultiCare Tacoma General Hospital is a Level II trauma center with 437 beds and the second-largest obstetrical care center in the state. During routine fire/life safety testing, it was determined that 841 of the hospital’s 2,139 fire, smoke or fire/smoke dampers needed to be either inspected, repaired or possibly replaced in order to meet National Fire Protection Association (NFPA) requirements.

After receiving the inspection report, MultiCare chose Hermanson Co. to perform the necessary corrective action to bring deficient dampers into compliance and to resubmit evidence of corrective actions taken.

Hermanson has more than 20 years of experience working in occupied hospitals. Additionally, it’s one of the few mechanical contractors in the Puget Sound area that employs the required accredited technicians (under the American National Standards Institute ISO/IEC 17024) to do damper corrections.

By utilizing the expertise of four specialized groups within the company, including TCC Group (Tab, Control, CX), Construction Support Group, Critical Environments (CEG) management, and a Special Projects workforce, Hermanson felt confident in its ability to meet the project deadline.

In the field, five crews were assembled to meet the project’s requirements and heightened time and operational sensitivity. The crews were composed of:

Additionally, MultiCare supplied David Dowling, a dedicated HVAC technician from its facilities department, to work as a liaison between hospital staff and damper correction crews.

“Working within a fully operational hospital with staff and patients needing access to areas where damper inspections may occur, having David Dowling’s assistance was instrumental in the project’s overall success,” noted Brad Sharp, a Hermanson supervisor and project consultant. “He provided the coordination necessary to allow the five crews to work on a continuous rotating basis with minimal downtime.”

Crews began the process of documenting repairs or replacements of each of the dampers called out in the initial inspection with photographic evidence of dampers in fully operational open and closed positions. Working across seven buildings on the hospital campus, meticulous record keeping was necessary to provide accurate documentation for final project reporting.

The initial inspection report, conducted by a third party, cited many dampers as “unable to inspect” (including 350 of the 374 dampers in one building alone) due to accessibility issues. These damper corrections required the additional step of gaining access before determining if any corrective work needed to be performed.

Hiring an accredited inspector can save both time and expense by allowing corrections to be completed at the time of inspection. 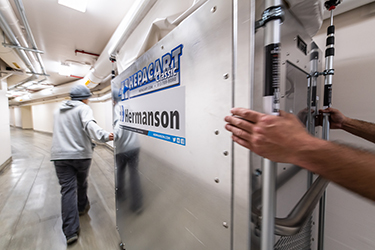 Patient safety, privacy and comfort were the primary project concerns, and achieved by scheduling work during early morning, late evening and weekends hours. Additionally, the use of Hepacarts ensured containment of dust and particulates that could have been introduced into the hospital during damper work. A spotter was stationed outside of the cart to assist with the safe passage of hospital staff and patients.

At the end of the three-month period, the required corrective action evidence report was submitted to keep the hospital in compliance for another six years. The experience and practical knowledge gained at MultiCare Tacoma General will be replicated on upcoming fire/life safety damper inspection and/or correction projects.

Sharp said, “While it has always be critically important, the professional execution of fire damper inspection and compliance certification is about to become even more top of mind for our clients.”

State lawmakers are currently working on HB 2701, which will set penalties for non-compliance and strengthen inspection and correction accreditation requirements.

“This puts teeth into the current NFPA requirement for quick corrective action. It’s the right thing to do to help secure safe facilities for vulnerable populations,” Sharp said.

It is expertise, pre-planning, commitment to patient concerns and the right resources that ensure satisfied health care clients and the continued safety of their patients and staff.

Jay Danner has worked for Hermanson Co. as a project manager in the critical environments group for more than eight years and specializes in health care projects.