While teachers, parents and students struggle with the question of returning to school campuses this fall, one school in Bellevue is preparing to welcome students back, when it is safe to do so, confident in the steps they have taken to help mitigate exposure to COVID-19.

As COVID cases continued well into the summer months, administration at Forest Ridge School of the Sacred Heart, an independent Catholic day and boarding school for middle and high school girls, contacted their mechanical preventative maintenance contractor for help in determining ways to reduce pathogen exposure in classrooms and dormitories.

Hermanson Co.’s Brad Sharp, testing, controls and commissioning manager, had begun researching the efficacy of both ventilation and surface-based therapies months earlier. Sharp, who has over 20 years in indoor air quality training and remedy implementation, had determined the combination of HVAC-based needlepoint bipolarity ionization (NPBI) and increased filtration to be the most effective option available. Sharp and his team had already installed functioning systems in a large corporate complex and medical clinic with promising results. 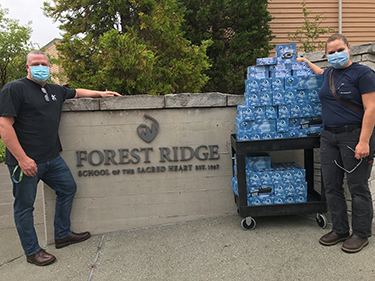 Needlepoint bipolarity ionization creates negatively charged ions (also known as anions) as air passes through a high-voltage electrical charge inside a cartridge strategically installed in HVAC ductwork. The ions clump molecules together, making them easier to capture by denser ventilation filters. The ions also rob virus, bacteria, allergen, mold and odor molecules of their hydrogen and render them inactive without creating harmful ozone!

The NPBI technology is an example of biomimicry. The negative ions created in NPBI are the same phenomenon that occurs in nature around rapidly moving water. The force of water creates negative ions. Anyone who has been hiking and came upon a waterfall or stood on the seashore near crashing waves recalls the fresh air surrounding those natural spaces. This is also one of the reasons a morning shower is so refreshing.

Based on Hermanson’s research and the manufacturer’s recommendations, Sharp sent a team of technicians to Forest Ridge to begin an HVAC system analysis. They gathered information on the system’s tonnage and cfm capacity. Once the information was gathered, technicians Kelsey Ayer and Chris Cruz confirmed the HVAC system’s true airflow by taking readings and performing spot pressure tests.

According to Sharp, proper air flow is key to creating the required level of ions needed to inactivate pathogens, dust and odor molecules. “Over the course of installing multiple NPBI units, we have developed an expertise in identifying airflow obstacles that would impact ion levels,” notes Sharp. In addition to ensuring proper airflow, strategic placement of the NPBI unit within the ductwork is also key to optimizing ion levels.

Once baseline airflow readings were established, installation of 100 NPBI units across nine buildings in the school’s air handler unit, fan coil unit, VAV and dormitory VRF ductwork began in early July. In addition to installing the NPBI units, Ayers and Cruz will be increasing HVAC filtration to MERV 13 as a first line defense against the COVID virus.

Forest Ridge’s decision to invest in NPBI technology was based on several factors.

“Brad Sharp met with us and did an amazing job explaining in layman’s terms the science behind why bipolarity ionization works,” recalls Kelly Cruden, Forest Ridge facility manager. “We have some functioning but aging HVAC components. Since the NPBI units are fully portable, they can be re-installed in future upgraded equipment, making this a sound investment for the long term.”

Studies have shown the NPBI technology selected for Forest Ridge has been able to reduce the COVID virus load by 99.4% within 30 minutes at consistent levels of concentrated ions. Additionally, NPBI is a continuously active preventative measure that does not, like mandatory mask wearing and recommended hand washing and social distancing, rely on human compliance. If the HVAC system is running, this preventative measure is working. Also, knowing this is the same method used in hospital and medical settings and does not create harmful ozone is reassuring to both staff and parents.

Already the indoor air quality at Forest Ridge has improved. Ayers and Cruz report entering the school’s chapel to a distinct stagnant smell, but after installing the NPBI unit, the air is noticeably fresher. As with other installations, once all the units are in place Ayers and Cruz will take ion counts to ensure the ions are accumulating at the proper level.

“We rely on peer-reviewed metrics to know the ions are doing the job of neutralizing COVID. We like to tell our clients that what their eyes cannot see, their nose knows,” said Sharp.

Once the NPBI units are installed and proper ion levels are achieved, the technology is virtually maintenance free. Unlike other technologies that require bulb changes or increased energy costs, the operational costs for NPBI are non-existent. Extended warranty programs can be tied into preventative maintenance agreements for additional peace of mind.

Long after a COVID vaccine becomes widely available, NPBI will continue to play a part in creating a healthy learning environment for the students at Forest Ridge. Studies show multiple benefits of exposure to negative ions including increased serotonin, reduced stress and depression, and boosts in daytime energy levels. Likewise, negative ions help counteract harmful exposure to positive ions generated by electromagnetic fields from computers that build up in confined classroom spaces. By removing allergens, molds and common bacteria and viruses, NPBI could also reduce staff and student absences.

Hermanson is in talks with area school districts, private schools, facility managers and school administrators about following the example set by Forest Ridge to employ a technology that mimics nature, mitigates exposures to harmful pathogens, improves indoor air quality, and most importantly helps relieve the concerns of students, staff and parents about returning to school.