Last weekend, Sound Transit opened three new light rail stations at Northgate, Roosevelt and the U District, forever transforming travel to and from North Seattle. But as important as this opening was, it’s just a taste of what’s to come. In the next three years, the light rail network will nearly triple from 26 miles to 62, and from 25 stations to 50.

In 2022, we will welcome six new stations in Tacoma, extending service from downtown Tacoma to the Stadium and Hilltop neighborhoods. In 2023, light rail will cross Interstate 90 and serve 10 new stations in Seattle, Mercer Island, Bellevue and Redmond. Then in 2024, we’ll extend north with four new stations in Mountlake Terrace, Shoreline and Lynnwood; extend south with three new stations in Kent, Des Moines and Federal Way; and extend east with two additional stations in Redmond. 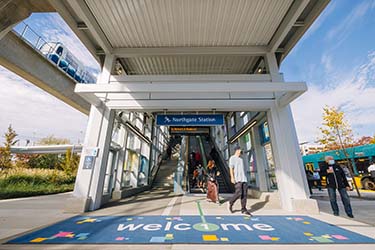 Photos from Sound Transit [enlarge]
Northgate Station opened last weekend. Other new stations opened in Roosevelt and the U District.

These expansions cannot come soon enough. Our region is growing quickly, is stuck in traffic, and is facing the climate crisis. Fast, reliable transit helps solve each of these problems, and our region desperately needs it.

The project also includes some unprecedented innovation to protect sensitive research at the University of Washington from noise and vibration. Sound Transit designed and installed 1,600 extra-dense concrete slabs that rest on custom-built rubber pads, minimizing vibration and electromagnetic interference.

Despite all these challenges, including a construction pause during the early days of the pandemic, Northgate Link is coming in about $50 million under budget. The $1.9 billion project also greatly benefited from $615 million in low-interest federal loans, saving local taxpayers millions in financing costs.

Northgate Link is more than just a major transit project, though. It connects people to opportunity, and it connects neighborhoods and communities to each other. As just one example, a new bicycle and pedestrian bridge at Northgate, built by the Seattle Department of Transportation, now reconnects North Seattle College and neighborhoods west of Interstate 5 with Northgate Station.

The new stations will also include new transit-oriented communities, with a mix of affordable and market-rate housing, jobs and businesses. Next year, nonprofit developers Bellwether and Mercy Housing will open Cedar Crossing, a 254-unit housing development next to Roosevelt Station. To date, 2,100 homes have been built or are in progress near Sound Transit light rail stations, and more than 70% of these are permanently affordable.

As the only 100% carbon-free light rail system in the country, our wind- and hydro-powered trains will eventually offset 790,000 metric tons of greenhouse gas emissions annually. Meeting the challenges of climate change requires that we decarbonize our transportation system, and light rail is leading the way. 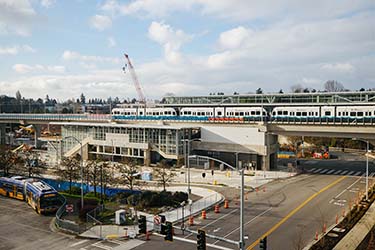 Last weekend’s celebration was also a moment to thank the 22,500 women and men who have given 14.4 million labor hours to build Sound Transit projects to date. We are proud to be employing a diverse workforce while also training the workforce of the future. People of color have performed 32% of our labor hours on Sound Transit projects, and women have performed 7% of the labor hours, both of which are well above the national average.

The Northgate Link Extension and future extensions also are true examples of the Biden administration’s Build Back Better agenda. We’re building green, climate-resilient infrastructure, developing the diverse skilled workforce of the future, building transit-oriented communities, and making travel faster and more reliable for the people of our region.

Despite all the progress we celebrated last weekend and the openings we anticipate over the next three years, we’re just getting started. Voters have approved further extensions to Tacoma, Everett, Ballard, West Seattle, Issaquah and Kirkland. Ultimately, we will have a 252-mile system of light rail, commuter rail, and bus rapid transit serving the people of our region.

A leading transit executive for more than a decade, Peter Rogoff has been the CEO of Sound Transit since 2016, where he has been overseeing the largest transit expansion program in North America.