Building a ‘ship in a bottle, through a storm drain’

While building U District Station and Roosevelt Station over the last four years, Hoffman Construction contended with construction sites among some of the city’s busiest neighborhoods, coordination with other Sound Transit contractors, and a staggering amount of concrete poured below grade.

U District Station was constructed with minimal impact to the busy University District and the adjacent UW Tower, and is designed to accommodate a transit-oriented development over the top of the station. Located directly across from Roosevelt High School, Roosevelt Station construction proceeded with minimal impact to its bustling neighborhood. The station is 90 feet deep, approximately 500 feet long, and 80 feet wide, with four levels underground and one above.

SHIP IN A BOTTLE 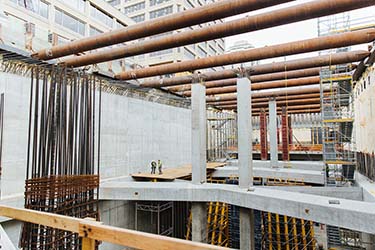 Photo by Glenn Landberg/Sound Transit [enlarge]
U District Station is mostly underground, so everything had to be lowered into the excavation area through massive struts that spanned the station box. 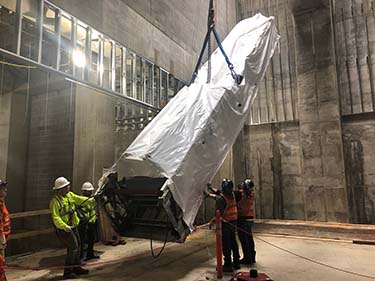 Photo by Glenn Landberg/Sound Transit [enlarge]
An escalator was lowered into Roosevelt Station. Hoffman used BIM and 4D sequencing to coordinate and sequence numerous large elements into the station box. 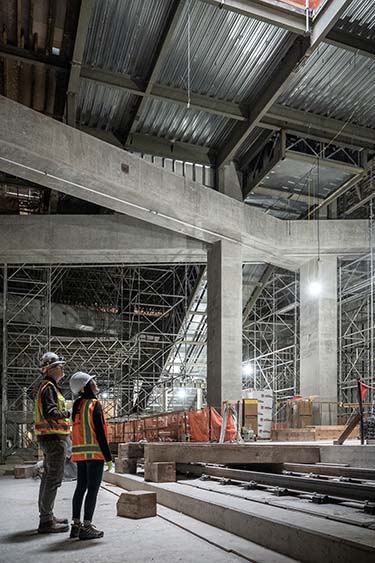 Photo by Hoffman Construction [enlarge]
The platform at U District Station is about 80 feet below ground.

During construction, our team referred to the U District Station as the equivalent of building a ship in a bottle through a storm drain — the building is mostly underground, so everything had to be lowered into the excavation area through massive struts that spanned the station box.

On both stations, we utilized BIM and 4D sequencing to coordinate and sequence numerous large elements into the station box and ensure they would fit through temporary structure openings, including eight large escalators and steel escalator enclosure tubes that had to be rigged and loaded into the structure after the structure lid was completed. With the stations 90 feet below grade, we implemented extensive waterproofing systems to prevent water from entering and extensive ventilation systems that include tunnels with large 400-horsepower exhaust fans.

A distinctive feature of Roosevelt is the incorporation of a classic red and green neon sign from the Standard Radio store, which had been a cherished part of the Roosevelt neighborhood since the 1940s. To keep the spirit of the neighborhood alive, Sound Transit salvaged the original sign from the demolished buildings at the Roosevelt Station site and Hoffman worked with Western Neon to rebuild and refurbish the iconic sign. The restored sign now hangs at the south headhouse ticketing area at the Northeast 65th Street entry.

Hoffman’s in-house structural division, Hoffman Structures, self-performed installation of about 40,000 cubic yards of concrete on Roosevelt Station. To tackle the vast amount of mass concrete, Hoffman Structures used the Kroll tower crane that the tunnel contractor, JCM, had utilized during the tunneling work.

The giant crane, nicknamed “Big Red,” was a neighborhood landmark. With higher capacity to hoist heavy components than a typical tower crane, the team could prefabricate wall pilasters at full height and build larger gang forms and rebar curtains, thus increasing efficiency and safety by minimizing the work required at heights. Sound Transit later hosted crane dismantling watch parties to celebrate and mark the next phase of construction.

A WEB OF CONTRACTORS

With both stations on the critical path of the overall schedule for the Northgate Link Extension project, finishing the stations in time for this month’s grand opening required detailed coordination with many other Sound Transit contractors. During three years of preconstruction, Hoffman worked through numerous logistical and phasing challenges to plan for construction to proceed in tandem with tunneling, rail, and systems happening in and around the station, as well as adjacent apartment building construction across from the Roosevelt Station site. Early initial planning and engagement with permitting officials helped all parties plan to allow permits to be signed off at completion of multiple systems with multiple interfaces.

As with any successful GC/CM project, collaboration with the design teams and Sound Transit construction management teams — McMillan Jacobs, Hewitt and KPFF on Roosevelt; McMillan Jacobs and LMN on U District — was critical for ensuring details were constructable and the design would work with the complex phasing and sequencing.

Sound Transit and Hoffman Construction share in our dedication to furthering diversity through fair competition and ongoing training and development for small and disadvantaged business enterprises. Hoffman exceeded diverse participation goals on both Sound Transit projects by holding outreach sessions to engage the diverse business community, helping to match and connect firms with first-tier subcontractors, and developing scopes in which diverse firms could be successful.

Hoffman received the 2017 Champion of Inclusion Award from Sound Transit for our leadership on U District Station in support of diversity and inclusion.

Hoffman helped bring disadvantaged workers into the workforce through collaboration with the many building trades unions that helped make these Sound Transit projects a success. The project labor agreements’ preferred entry program allowed graduates of pre-apprenticeship programs the opportunity to work on the project. Hoffman partnered with ANEW, an organization dedicated to improving access and advancement of women and people of color in construction through its preferred entry pre-apprenticeships and training programs.

We are proud to deliver these new stations that will positively impact our communities for decades to come.