What it took to build the ‘greenest’ arena ever

As we counted down to opening day of Climate Pledge Arena on Oct. 22, people around the region were excited to welcome live music, National Hockey League’s Seattle Kraken and Women’s National Basketball Association’s Seattle Storm to Seattle. But few people know what it took to build the first International Living Future Institute-certified net-zero-carbon arena in the world.

Being chosen by Oak View Group, a Seattle public-private partner and developer, to redevelop Climate Pledge Arena into a brand-new, best-in-world venue — all while keeping its historic landmarked roof intact — has been one of Mortenson’s most challenging and rewarding undertakings.

As if this alone wasn’t enough of a challenge, a whole new bar was set when Jeff Bezos from Amazon posted on Instagram in June 2020: “I’m excited to announce that Amazon has purchased the naming rights to the historic Seattle arena previously known as KeyArena. Instead of calling it Amazon Arena, we’re naming it Climate Pledge Arena as a regular reminder of the urgent need for climate action. It will be the first net zero carbon certified arena in the world, generate zero waste from operations and events, and use reclaimed rainwater in the ice system to create the greenest ice in the NHL. #ClimatePledge.” 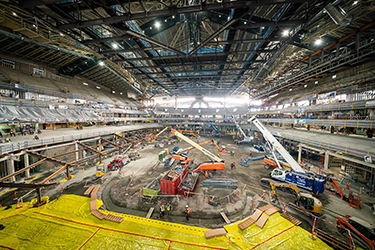 Photos from Mortenson [enlarge]
Over 1,100 craft workers put in 9,000 hours a day during the height of construction.

When Amazon bought the naming rights to Climate Pledge Arena — with the idea of making it the most progressive, responsible, and sustainable arena in the world — the Mortenson team had already been under construction with the original design for more than 15 months.

In order to keep our commitment of quickly delivering the arena by October (in an already-challenging setting), the team had to fast-track sustainability elements to meet the goals of offsetting 100% of the energy used to operate the building — while disclosing and off-setting all the embodied carbon emissions associated with the construction and materials, as well — in record time.

Climate Pledge Arena is the first arena in the world powered only by renewable energy, which meant Mortenson had to conduct a major redesign effort to change the original design from gas to electric. Since the arena runs solely on electricity for daily operations — and has the first all-electric dehumidification system in the NHL — Mortenson had to change construction planning for natural gas to electrical systems. From kitchen systems and concessions to air handling units and building conditioning, all systems are served by electrical energy instead of natural gas — resulting in the facility venting zero combustion gases into the atmosphere. Even the Zamboni is electric powered.

Changing out the plan for gas distribution piping to electrical substations, which significantly increases demand for the amount of electricity coming into the building, required more electrical equipment with increased utility service. This called for critical early and frequent collaboration with Seattle City Light and Seattle Center, a key element to successfully making this transition.

Important changes were made at the procurement and fabrication stage, and the custom electrical equipment production merged with the project’s aggressive schedule. One of the most challenging aspects of switching gas to electric was the food service equipment. While commercial electrical boilers and water heaters are more commonly available, operating food service concession equipment entirely with electrical components was almost unheard of — and sourcing these specialty items that didn’t yet have commercial demand required long lead times that had to be factored into the overall schedule.

Next, situating the additional electrical gear and transformers presented a real conundrum with space utilization. Mortenson and the design team needed to determine where the equipment was going to live. The entire construction and design team needed to find the best location that was cost- and schedule-efficient and required the least amount of rework. The team narrowed and evaluated three sets of options for optimal locations, positions, and configuration to best fit the facility’s program.

Overall water usage is critical to limiting energy use and sustainability goals. Climate Pledge Arena harvests rainwater from its iconic roof, stores it in a 15,000-gallon, below-grade cistern and filters it as needed for the first “rain-to-rink system.” This innovative system will capture and purify enough rainwater annually for more than seven times the volume of water required for the arena’s ice sheet — and will maintain the “greenest” ice in the NHL. Other water-saving systems include waterless urinals and low-flush fixtures, ultra-efficient showers, significant on-site retention tanks reducing stormwater runoff, and using electrical boilers for domestic water (for handwashing and drinking), and water bottle filling stations throughout the arena. 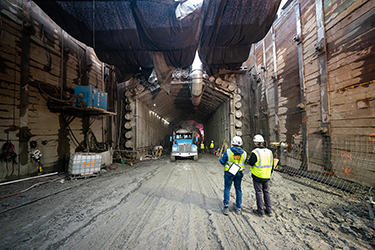 [enlarge]
The new arena is served by a 25-foot-wide tunnel, which provides enough room for two passing semi-trucks.

Photovoltaics were another issue to be addressed. Due to Climate Pledge Arena’s historic status, the team couldn’t install solar panels on the arena’s iconic existing roof — however, on-site solar arrays were placed at the venue’s associated aspects: a newly built atrium in front of the arena, an adjacent parking garage, and a training facility in Northgate (that facility has a separate load of around 2 megawatts). Panels at the atrium roof are flush-mounted next to large skylights, which allow incredible daylighting into the multi-story space outside the arena bowl. The parking garage features canopy solar at its rooftop level.

THE IMPORTANCE OF TECH

While this article only covers a portion of what it took to build Climate Pledge Arena, it’s worth noting that more than 6,000 people have performed work at the arena in the three years it took to build, and at the height of construction we had more than 1,100 craft workers working 9,000 hours in a day — that’s more than four equivalent worker years in every day.

The amount of coordination necessary to successfully complete this groundbreaking project demanded that the construction and design team use several tools to ensure design, construction and marketing efforts dovetailed together to create a seamless project delivery.

Mortenson used 4D building information modeling as a basis for multi-trade coordination and scheduling — and the entire building was constructed virtually to aid with major trade system coordination. For instance, the team completed a laser scan of the existing roof and structure to overlay design and construction planning to integrate new work with original. The steel team used the model to track fabrication and installation tasks, and color coding was used to aid schedulers while tracking procurement, upcoming tasks, and completed work. Using the 4D model, the mechanical, electrical, plumbing and fire protection systems were modeled to not only assist in clash detection (field installation coordination) but also in prefabrication efforts.

Climate Pledge Arena is a big step towards a sustainable future — and through intense teamwork, top-down collaboration, and digital tools to simulate the built environment — it proves that even big, complex projects that have a lot of physical infrastructure (in this case an 800,000-square-foot arena with 18,000-plus seats!) can (and should) use climate-friendly energy sources to reduce carbon emissions.