Looking back over 50 years, Blaine Weber recalls the skyline-defining moments of his career 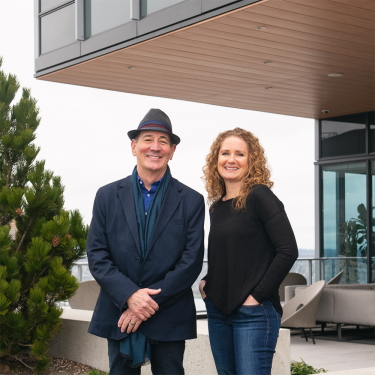 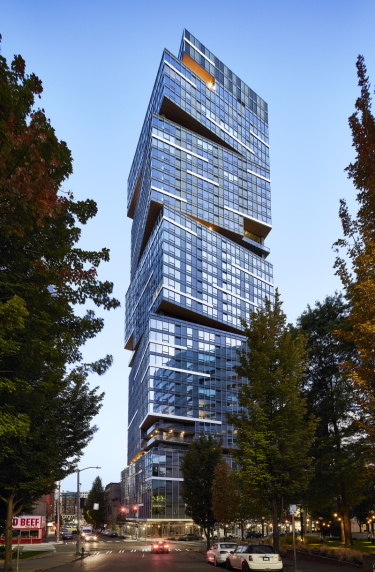 Photos courtesy of Weber Thompson [enlarge]
Weber Thompson is known for its high-rise design, such as the 41-story Nexus condo tower in Seattle’s Denny Triangle.

The year was 1987, which saw the crash of the stock market and a crash — albeit temporary — in the local economy and construction market.

The downturn gave Weber an important tool in his arsenal as an architect and company leader.

“Project funding in 1987 evaporated like an ice cube on hot asphalt, and many of our projects went on hold,” said Weber. “Fortunately, we had a couple of contrarian, counter-cyclical clients with ties to private capital that relished tough times when labor and materials went ‘on sale.' These clients helped us power through what ended up being very challenging times for design professionals.”

Looking back on his 50-year career, as he prepares to retire as senior principal and co-founding partner this month, Weber said he's grateful for the good and not-so-good times.

Weber led the design of several projects that grace the Seattle and Bellevue skylines, including Nexus, Kiara, The Post, Stratus, Cirrus, Helios, Viktoria, Ascent, Premiere on Pine, Cristalla, and Fifteen Twenty-One, as well as currently under construction projects such as The Ivey, The Ayer and Avenue Bellevue.

Weber was also a staunch advocate for high-density downtown living and for safeguarding the architectural profession from a risk management standpoint.

Senior principal and partner Amanda Keating will continue Weber's legacy as she takes over the leadership of Weber Thompson's high-rise design studio.

“My primary focus has always been on arriving at great design through thoughtful exploration while searching for the right ‘parti,' or big idea, based on client vision, site, context and urban fabric,” he said.

But big ideas also may bring big liabilities for architects. “The cold, hard facts are that design professionals — not just architects — can face a tremendous amount of amplified risk, relative to limited reward,” he said. “At the end of a project, there may or may not be a profit, but there will always be a 10-year cloud of statute of repose and statute-of-limitations liability hanging over every project.”

To reduce liability and increase productivity and creativity, architects like Weber learned to master new technologies in the last half century, he said. Like many of his contemporaries, Weber, who started out in architecture in 1972, used the traditional Mayline drafting table for many years. The advent of computer-aided design was a game changer.

“The transition to building information modeling via AutoCAD was certainly transformative industry-wide, but I would say that Sketch-Up was even more so, as it afforded the ability to visualize and model design in 3D, on the fly, as projects move through design evolution,” Weber said. “Our clients have loved our ability to change a model in a client meeting, right before their eyes. The many Sketch-Up plug-ins available over time, such as Enscape, have allowed us to produce very high quality, in-house illustrations that helped to elevate our presentations and more effectively communicate design intent.”

He said the transition to Revit, a more advanced 3D version of BIM, was again transformative on many levels, particularly regarding more sophisticated parametric capabilities. Revit meant that a change in the design plan could be reflected automatically across the entire modeling platform, including elevations, schedules and dimensions.

“Another more recent technological advancement is found in the world of virtual reality, utilizing Oculus-style headsets, where we are able to give our clients a true experiential vision of what their space will look and feel like in virtual three-dimensions before it is built,” he added. “What does the future hold? The concept of the MetaVerse will no doubt bring us into a new virtual design universe with new possibilities that we have not yet imagined.”

The advent of sustainable design, particularly the LEED system, added momentum to the role architects can play in reducing carbon emissions.

“From my perspective, the LEED system was a launching pad, but not the end-all,” he said. “Passive House and many other programs in development will perhaps provide more meaningful innovation and results as they come to fruition in the next decade. Architects can and must be on the cusp of this innovation, and I believe that our Watershed commercial office building project — a Living Building Pilot Program project that filters salmon-killing pollutants coming off the Aurora Bridge into biofiltration swales — is a great ‘What if?' example of how architects, working in tandem with visionary clients, can be great leaders in a movement that is vital to the survival of generations to follow.”

Recessions in the early 1990s, early 2000s and 2008 helped Weber Thompson refine methods for dealing with the cycles of construction. The Great Recession of 2008, unlike prior recessions, brought a gut-check to many local AEC firm leaders.

“Our firm prospered and grew over the years, and Weber Thompson found itself with about 100 staff members and five design studios up until the Lehman Brothers collapse and ensuing Great Recession of 2008,” he said. “Our lesson out of these very tough times was, again, to get lean and efficient and to diversify our design work into additional areas of expertise. We have learned that there are always greener pastures on the other side of difficult times, but it does take patience and tenacity.”

Along with honing skills as a business leader through lean times, Weber said he is equally proud of his risk-management efforts.

“Over the last 30 years of my 50-year career, I have placed more focus helping my firm and other colleagues manage risk through best practices, applying lessons learned, by promoting reasonable expectations, and by ensuring careful contract language that allocates risk and reward fairly,” he said.

Weber said he leaves his firm with a legacy of developing relationships with repeat clients and productive collaborations with general contractors.

“I am proud,” he said, “for having helped to create a firm with a great culture that is committed to integrity, great ideals, diversity, mentorship, and helping to save our planet from climate change with innovative projects that provide demonstrative payback for our clients.”