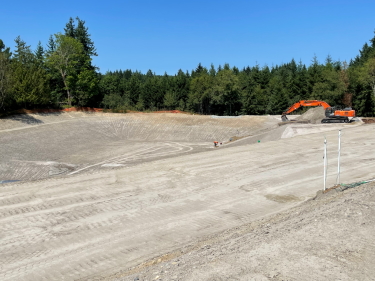 Photo courtesy of I&E Construction [enlarge]
Re-engineering one of the storm ponds at Stetson Heights was part of the process of getting the site ready for building.

As the housing market in the Northwest took off in the last few years, one local development couldn't get off the ground.

Stetson Heights, a master planned community in Port Orchard, faced one hurdle after another.

Located on 103 acres and permitted for 410 lots, Stetson Heights has the potential to deliver a significant boost of inventory in the Port Orchard and regional housing markets.

But the project was mired in ecological missteps and bureaucratic red tape, according to Jeffrey Bivens, director of development for Wilsonville, Oregon-based I&E Construction. What Stetson Heights needed was a construction firm that could get it back on track.

“Over multiple projects, we have developed a certain expertise in performing on sites that have environmental damage, are contaminated or have certain features — steep slopes, expansive clays, bedrock, lava, agricultural residue, petroleum — that make the costs and risks too significant for other companies,” Bivens said. “We have worked with the city of Port Orchard to resolve all of the past issues, while ensuring that the I&E way of development can occur on this site without future risk.”

The development's original owner, Stetson Heights LLC, quickly found itself on the state Department of Ecology's radar in 2018, after mass grading and clearing issues arose. According to Ecology, ground-clearing methods caused stormwater runoff to flood the site, ending up in nearby streams — causing a red tag shutdown of the project until proper development techniques were developed and implemented.

“The initial engineering was a bit underwhelming and incomplete,” said Bivens. “The city of Port Orchard could not approve the civil plans as drafted. The site had approximately 90 acres of bare, scrapped dirt, on a site that was comprised of large bare slopes — directly above fish-bearing streams and surrounded by residential housing.”

Four storm ponds were re-engineered, allowing crews to immediately increase the size, capacity and strength of the ponds to contain, control and reduce the risk of any inadvertent discharge, Bivens said. To help with erosion control, grass was hydroseeded on 91 acres of the development while catch basins and wattles were added and the entire site stabilized.

“We brought in multiple piping layouts and pumps and spent the entire winter and spring pumping water between the four ponds to always keep water levels controlled and safe,” he said. “Over the summer of 2021, we redesigned the storm system layout and tied the entire system together. We have enhanced, created or set aside 28 acres of ponds, wetlands and critical areas and open space.”

At the same time, I&E has been developing the lots and will have recorded and transferred to D.R. Horton the second phase of 116 lots by next month. I&E started developing Stetson Heights in May of 2021, has finished phases 2 and 4 and plans to develop and finish phases 3 and 5 by the end of this year.

As I&E finishes the ground work, D.R. Horton is taking over with the vertical construction of the sites. To date, 13 foundations have been poured and Bivens said the homes will go up quickly.

“The significance of large subdivisions in a housing-constrained market is far-reaching,” he said. “The combined development fees together with the transportation fees, the water fees, school fees and the park fees from the construction all add to the growth and health of the city budgets, allowing the city the ability to expand or increase the quality of what Port Orchard offers its citizens.”

For I&E, tackling projects like Stetson Heights presents challenges and opportunities. Getting jurisdictional permits and meeting the challenges of material supply shortages are par for the course during the pandemic, Bivens said. “It's an expensive new reality,” he said, “but we try to hit the same completion schedule.”

Bivens said, to stay on top of the project's progress, he has on-site team meetings once a week to meet with the construction team members and go over the jobsite, schedule, costs and design issues.

After each site visit, Bivens said he has a video conference with all involved team members.

“We bring all members to the table, the vertical builders, D.R. Horton, the environmental consultants, the engineers and contractors, together with I&E as developers. This approach is one that I&E has used on multiple projects in other states and it works out very well to keep schedules intact and allow for the maximum amount of forward planning in the development stage, answering questions and designing solutions before they become problems,” he said.