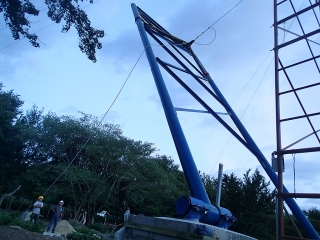 Photo courtesy of Bridges to Prosperity [enlarge]
Bridge towers were lifted into place with pulleys.

Sometimes a bridge does more than cross a gap. For Brooke Shore, a project engineer at PCL Civil Constructors in Bellevue, a bridge crossed a continent.

Shore traveled to Nicaragua in late May to complete a volunteer bridge building internship in Ducuale Grande, a village about 2 hours by bus from Managua, the country's capital. She worked for the nonprofit Bridges to Prosperity, which builds footbridges in villages around the world.

A vehicle bridge over the Rio Ducuale connects the village of about 100 with the regional capital, Condega, where locals go to school, shop and receive health care. Most importantly, they can get to the main highway, where they can find even more services and jobs.

Ducuale Grande is surrounded on three sides by the river, making it a peninsula.

Ten months out of the year, pedestrians and vehicles use the concrete bridge, but in the rainy season, the bridge is covered with water. Residents will do anything to get across the river, such as swim or tie ropes around their waist and have a partner pull them across. 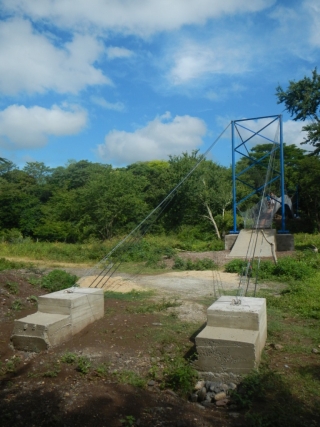 Photo courtesy of Brooke Shore [enlarge]
The footbridge over Rio Ducuale links a village of 100 with the regional capital of Condega. Concrete blocks anchor the suspension cables.

“All the methods are dangerous,” Shore said. “One of the most consistent volunteers on the project was a man who almost died trying to cross the river earlier in the year.”

Ducuale Grande is famous for its traditional clay pottery, which is sold to tourists throughout Nicaragua. The new 220-foot-long footbridge allows Ducuale Grande Women's Pottery Cooperative to sell its pottery uninterrupted.

“We built a footbridge, but designed it to be heavy enough to carry a motorcycle, because we knew people would try to drive over the river, too,” Shore said.

Bridges to Prosperity had already arranged for initial surveying and excavation.

People from the community volunteered for the project. For the last two weeks, a group of six contractors from other U.S. companies joined them.

The anchor-stayed suspension bridge is supported by a concrete foundation and cable anchors. Steel towers on top of the foundation support the cables. The only available delivery truck had difficulties getting to the job site, forcing community members to move materials and supplies from Condega with a handcart, a wheelbarrow or oxen, Shore said. “We were very lucky to have a small concrete mixer,” but each concrete batch was moved by hand.

For the first eight weeks, a crew of local volunteers mixed and moved concrete and tied rebar.

Bridges to Prosperity also paid two masons to help. One of their main jobs was to build a CMU wall, which took the place of formwork for the towers.

“Wood can be difficult to find, so Bridges to Prosperity uses CMU for the formwork, which is much easier to locate,” Shore said.

The towers, prefabricated in North Carolina, were assembled in the town square, carried to the bridge site and lifted into place with a scaffold and two pulleys. Then three cables were installed on each tower and the bridge was pulled into place. 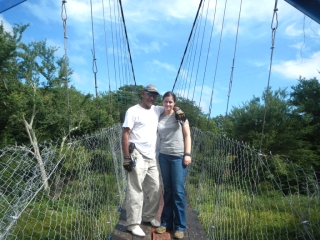 The bridge is no comparison in technical difficulty to the Snohomish River bridge Shore is working on for PCL.

“But the thing I liked most about the trip was the people,” Shore said. She still talks to her host family, who lives in Condega.

And she is still involved in Bridges to Prosperity, acting as a mentor to student groups at universities around the country. The students design the bridges here, and then travel to a foreign job site. In the last two weeks of the project, Shore will meet them to supervise the final stages of construction.

“I loved the project, but it was a long time to be away from work,” Shore said.

It was only supposed to be a three-month stint, but project delays added two weeks to her visit.