Photos from Garner Construction [enlarge]
Operators can see what’s happening at the hook instead of relying on radio contact with loaders below.

As a tower crane operator, Jackie Garner has enough experience to do a job with her eyes closed. And in many cases, that's how most crane operators have to work: in the blind, hearing but not seeing.

But Garner said advances in wireless camera technology have opened her eyes to a much better way of operating cranes that lift tons of materials and equipment at construction sites.

The owner of Garner Construction of Seattle, Garner has helped develop what she said is a must-have for all crane operators: the ProPick wireless camera.

“I don't want any of my operators to go to work any longer without the advantage of a wireless camera,” Garner said.

Garner's hope is to eliminate what crane operators call blind picking: relying on radio-only contact with loaders to attach heavy loads to the hook block at the end of a crane.

Garner said she has applied her 40 years of experience, including 23 years as owner of Garner Construction, to the development of the ProPick camera.

The wireless camera system allows crane operators to view live feeds of materials being loaded to the crane hooks, so they can confirm that the load is balanced and the rigging is appropriate for the load. 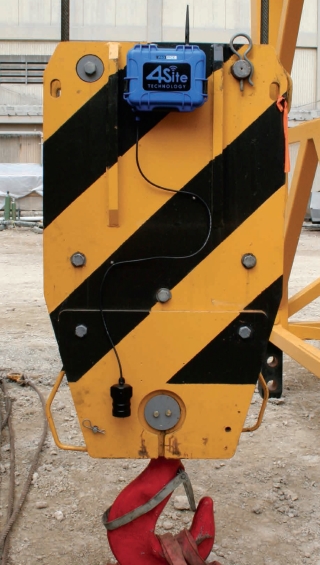 [enlarge]
The system is mounted on the hook block.

“Any time a crane operator has a load hooked it has to be done by radio control,” she said. “Workers on the ground tell them to move the boom left or right. But the rigging can be incorrect or the load is not stabilized properly. And before we had radios, crane operators had to use hand signals.”

The cameras eliminate blind lifts and help avoid hazards such as loads striking workers, according to Garner. In addition, she said crane operators can verify the balance of the load and confirm that the rigging is secure before starting the pick.

Garner said she's seen her share of mis-rigged loads that came loose and caused structural damage, but “fortunately nothing has ever caused damage to workers (at my jobsites).”

She said a fifth of tower crane related injuries are caused by uncontrolled loads hitting workers.

The ProPick cameras are used on all of Garner Construction's jobs in the Seattle area. The system was recently used at the 43-story tower at 815 Pine St. and is being used on eight other Seattle construction sites by general contractors such as Exxel Pacific and Rafn Co.

Garner said she became interested in using the wireless cameras after seeing similar systems on cars.

“When car companies started offering the option of the rear camera, that sparked my interest in using them in construction,” she said.

Garner worked last year with a local company, 4Site Technology, on developing a prototype and earlier this year the camera was made available for the mass market.

Wireless cameras for cranes also reduce stress for crane operators because they have better visibility, she said, and the system increases productivity.

ProPick competitors are the HoistCam, produced by Netarus of Norfolk, Virginia, HookCam by Pacific Systems Solutions of Kailua, Hawaii, and a crane video system offered by Intec Video Systems of Laguna Hills, California.

“The HoistCam provides operators with better situational awareness,” Machut said. “It's just a really exciting time for providing crane operators with a safe alternative so they know what's going on when they do their picks.”

Machut said the HoistCam system costs $10,000, or it can be leased. In the last three years, he said HoistCam sales have increases 100 percent each year.

“It's taken off really well,” he said.

The ProPick system costs $9,000 and can also be leased.

“These (crane operation danger) issues and damages are usually due to the lag time associated with the operator having to rely on flaggers and radio operators during blind lifts,” Lanclos said.

“The Royal crane boom camera system is designed to give the operator a direct line of sight with the load, allowing the operator to see into the lift area and watch the load and personnel location during movement,” he said.

Although Garner said her company uses the camera system on all its projects, she admitted it's somewhat new to contractors in the Northwest. But she said interest is growing fast.

Machut said one of his biggest challenges is overcoming contractors' lack of familiarity with the system.

“Many crane operators don't even know it exists,” he said. “They don't know there's a way to eliminate blind lifts. People are always fearful of change. But once crane operators use the system, they say they love it and would never operate again without it.”