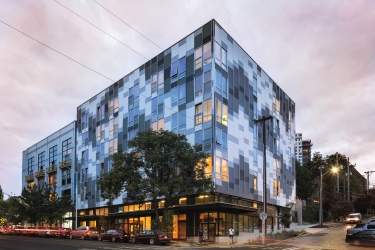 Of the many sustainable components found at the recently completed Cove apartments at 601 E. Pike St. on Capitol Hill, the large fish tank near the entrance stands out as the most literal gesture of a water feature.

The tank is the only large-scale fish tank in a mixed-use Capitol Hill building and is one of many elements that architect Michelle Kinsch said sets the building apart from its neighbors.

“There are a lot of features in Cove that you don't see every day,” said Kinsch, associate principal with Tiscareno Associates and project manager for Cove.

Cove, which is designed to achieve LEED platinum status, shows that sustainable design is functional and attractive to users, according to Kinsch.

“Just look at how it performs in the market place,” said Kinsch, referring to the immediate popularity of the 60-apartment, six-story building. “It's good business.”

James Wong, co-founder and CEO of Vibrant Cities (formerly Solterra), the developer of Cove, said that the building was 90 percent leased in less than three months.

“The formula is working,” Wong said, referring to his firm's commitment to sustainable design and creating sustainable living communities. “Our mission is to create sustainable communities that people feel proud to call home. We wanted to make a statement and to make Cove as urban and sustainable as possible.”

To achieve maximum rentable square footage the designers got creative — designing efficiently sized units that fit like a jigsaw puzzle, Kinsch said. On the ground floor, the combination of micro-retail and a larger retail space along with the residential lobby and mezzanine creates one large efficient space.

Residents can access a 3,000-square-foot green roof, with seating and vegetation. 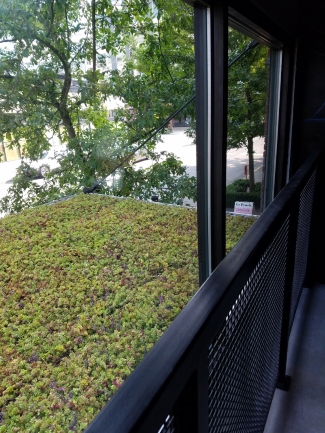 [enlarge]
YT Engineers had to account for the extra weight of the eco-awnings and captured stormwater in its structural design.

Awnings at the retail level also have living plants, which along with the roof greenery allow natural filtration of stormwater, prolonging the roof's lifetime while discharging cleaner water to the city's waterways.

Bob Tiscareno, project architect of Cove, said eco-roofs are a growing trend among sustainable designs. But, what also sets Cove apart is its use of eco-awnings, which are visible from the street level. He said structural engineer YT Engineers of Bellevue had to account for the extra weight of the eco-awnings and the weight of captured stormwater in its structural design.

“The green roofs on the (awnings) are pretty amazing,” said Kinsch. “The awnings and the 3,000-square-foot vegetated roof take advantage of a bunch of succulent plantings.”

Cove drew inspiration from the Bullitt Center in Seattle, which was built to the Living Building Challenge 2.0 standards, including a gray water re-use system, solar panels and a sophisticated green roof.

“The Bullitt Center served as an inspiration for super high-end green buildings,” said Wong. “It showed us what's possible for environmentally and economically sustainable design.”

The small footprint of Cove, on a 9,000-square-foot site that had been a Mercedes repair shop, meant that Tiscareno had to make the most of space and natural lighting.

“It was important to Vibrant Cities to create a community where each unit feels comfortable, natural, open and inviting,” Tiscareno said.

In addition, he said the exterior cladding of the building is pre-finished cement panels framed with renewable bamboo siding. He said this choice in cladding did not compromise aesthetic qualities and left room in the budget for the turn-and-tilt windows. It also creates an undulating facade that he said helps give Cove a “strong identity that sets it apart from other buildings” in the Pike-Pine corridor.

Going on the market during a particularly hot Seattle summer, Wong said he was happy with his firm's decision to include air-conditioning units in the apartments. More than 90 percent of apartments in Seattle don't come with A/C, he said.

Wong said the added investment to take Cove to LEED platinum helped Vibrant Cities market its apartments as sustainable and energy efficient, which helps the bottom line in the long term.

“Cove shows that building sustainability is achievable and worth the cost,” Wong said. “Over the long run, our goal is to hold the property. Our market is for tenants who enjoy sustainable living and who want to keep the benefits over time.”