Machinists Inc. has done it all, from sculptures to industrial equipment — now it's getting bigger 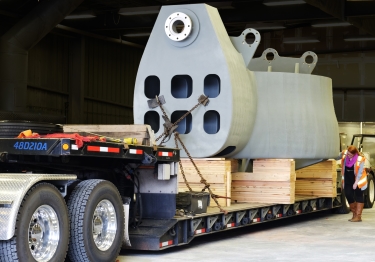 As time goes by, Julie Speidel's sculptures get more complicated.

To make the Seattle artist's works stand the test of time, Speidel turns to Machinists Inc.

“Julie comes to us with a concept, and says ‘I need it to look like this, made out of this material,'” said Machinists director of marketing Jeff Tomson. “What we bring is the manufacturing know-how to build it. We design the structure behind the shape, and that is how it stays together, is safe and structurally sound.”

Projects such as Speidel's 14-foot-tall bronze sculpture at Fifth Avenue and Columbia Street in downtown Seattle and giant sculptures outside Amazon's Doppler building have been manufactured at Machinists under Speidel's guiding eyes, as they progress from concept to completed form.

For Machinists such projects, however, are not the bread-and-butter of its daily production. Located in Seattle's South Park industrial neighborhood, the company specializes in welding, machining and engineering complex parts for companies such as Boeing and Genie.

As the largest precision machining shop in the Northwest, Machinists recently expanded its production with the acquisition of The Gear Works, a South Park company focusing on manufacturing and repairing precision gear products. Both companies have multi-generational ownerships, and both have been in business since the 1940s.

“In essence, Machinists was able to look at this acquisition as a very strong tool for us to grow,” said Tomson. “This tremendously expands our capabilities and capacities. We went from less than 100,000 square feet to more than 200,000 square feet of manufacturing facilities. We now have machines that are capable of machining 160 inches in diameter.”

The Seattle Times reported that Gear Works closed last week, laid off all its employees and sold its equipment to Machinists.

The two companies are, by coincidence, across the street from each other.

Although Machinists has done gear box repair and manufacturing in the past, the Gear Works acquisition greatly expands its capacity in that area, Tomson said.

“With the acquisition, we can incorporate more gear box capacity under our wing,” he said. “This allows us to be more competitive in a larger scale capacity.”

He added that the acquisition expands Machinists' number of lathes, milling machines and grinding machines, and brings its number of employees to about 200.

“The larger machines (at Gear Works) will allow Machinists to be able to compete in manufacturing that requires larger equipment. We'll use the large mills and lathes for custom components.”

Tomson said Machinists will continue its work for one of its largest clients, Genie, the Redmond-based lifting equipment manufacturer. Machinists builds components for the manufacturing of Genie work lifts.

Machinists has also had Boeing as a client for 25 years, manufacturing the tooling Boeing uses to make its planes in the Northwest.

With the acquisition of Gear Works, Machinists will continue its work manufacturing and repairing parts on wind turbines. “They take them off the (wind turbine) towers and ship them off to us,” he said.

The acquisition means “all turbine work can be done under one umbrella,” he said. “We can diagnose any issues that come up with the systems and come up with a repair plan.”

Machinists also does government work for clients such as the Department of Defense, providing parts and services for submarines and aircraft carriers, as well as the Army Corps of Engineers. Machinists recently rebuilt bearings and gates at the Ballard Locks for the corps.

Stuart Kendall, a founding partner of Seattle Solstice, a South Park company that designs, engineers and fabricates large-sale stone, glass and water features, said he turns to Machinists for work on some of his projects.

Kendall worked with Machinists to fabricate a tall water feature at 1201 Third Ave. in downtown Seattle, as well as an ongoing project for Amazon founder Jeff Bezos called the 10,000 Year Clock, being built inside a mountain in west Texas.

“We're working with Machinists for fabrication services and precision machine works,” said Kendall, who used to be an engineer with Machinists before forming Seattle Solstice.

The clock in Texas, which does not have a completion date, is designed to last 10,000 years and will have chimes that will be programmed to create continually new melodies during its lifetime.

At his plant in South Park, Kendall said he dedicates much of his manufacturing space to creating large stone work projects, so he uses Machinists as well as Gear Works for precision metal fabrication projects.

While the work with Kendall and artist Julie Speidel are important to the company, Tomson said the lion's share of Machinists' work will still be for clients such as Genie, Boeing and Sound Transit. Machinists also will continue working on projects such as repairing and manufacturing cutting heads for tunnel boring equipment.

“We're very excited about increasing our overall footprint,” Tomson said. “This is a really good thing for the economy of Puget Sound.”

He added that if President Trump's current proposal for a nationwide infrastructure plan is approved, that will mean more work for Machinists.

“Anything to do with specialty manufacturing, like bridges or increasing local ferry capacity, will bring all kinds of work,” he said.