In the next 60 days, the city of Seattle is expected to make two important announcements regarding the proposed local improvement district for the Seattle waterfront project.

Owners and tenants alike should closely monitor these announcements as they will reveal the LID assessment that the city expects property owners to pay. 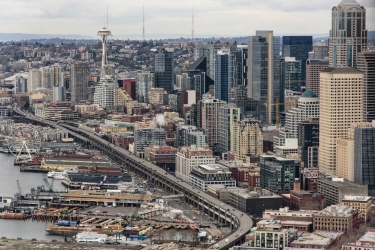 Photo from WSDOT [enlarge]
Redeveloping the waterfront will likely result in higher taxes for many property owners.

The total special benefits have been projected to reach upwards of $400 million according to the August 2017 feasibility study. But the city has stated that it intends to collect no more than $200 million from the LID. The City Council will be coming up with a formula (or ratio) to charge those property owners for the “special benefits” gained by the project. Past LIDs have charged property owners 50 to 70 percent for such benefits.

For example, a $10 million fair market value property (before completion of the waterfront project) may hypothetically receive $500,000 (about 5 percent) in “special benefit.” Therefore, a .5 ratio would result in a preliminary LID assessment amount of $250,000 versus a higher .7 ratio resulting in a $350,000 under the same conditions.

These are one-time assessments, but are entirely separate from the annual property taxes — almost certainly to increase after the waterfront project is completed.

The difference between a $250,000 and $350,000 assessment is considerable, especially when you consider the broad variety of property types and owners along the waterfront to Pioneer Square, the downtown core and east to Capitol Hill.

Building owners, tenants and other parties should be prepared for all possible outcomes resulting from the City Council's cost-benefit ratio. That ratio will result in significant impacts to operating costs, leases and future development. As we all wait for official word from the City Council, it is never too early to prepare for any and all scenarios.

The city has pledged that it will not impose a supplemental LID assessment should the project run into cost overruns or should financing fall short in other areas (i.e., park levy and philanthropic contributions). So this should be the only LID assessment imposed on property owners.

Derrick De Vera and Milt Reimers are real estate and construction lawyers for Schwabe, Williamson & Wyatt, a full-service law firm with offices in Oregon, Washington and Northern California. Both work in the Seattle office.