Amazon Spheres: ‘probably the most complex steel job that's been built in the Northwest — period' 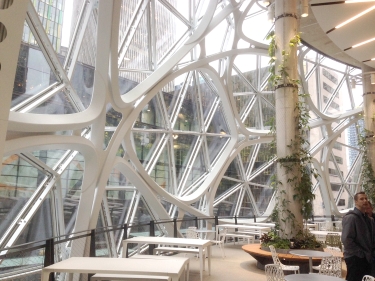 Photo by Brian Miller [enlarge]
Mohawk Metal used lasers to manufacture most of the parts for several thousand feet of brushed stainless handrails for the elevated platforms and walkways. 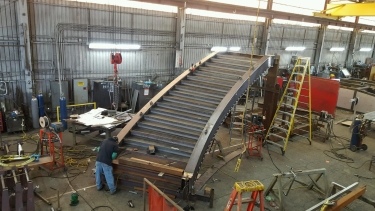 Photo by Nathan Albro [enlarge]
A fabricator from Mohawk works on the sweeping stairs for the spheres. 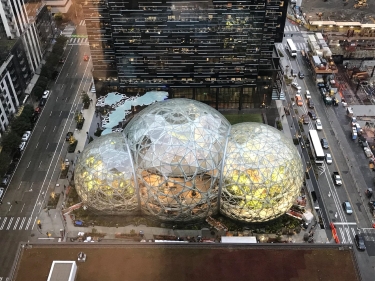 Photo from Dan Wyland/Supreme Steel [enlarge]
The largest sphere is 90 feet tall and 130 feet in diameter.

A Eugene, Oregon, company played a big part in creating Amazon.com's three plant-filled glass and steel spheres, which opened in January on the Denny Triangle campus in Seattle.

Mohawk Metal Co. provided about 1,325 tons of steel that was used in the interior and some of the exterior of the spheres, located on the south side of the block bounded by Sixth and Seventh avenues and Blanchard and Lenora streets.

One of the spheres is 90 feet tall and 130 feet in diameter. Slightly smaller spheres sit on two sides of it. Encased inside are 400 botanical species and spaces for different functions.

“This was probably the most complex steel job that's been built in the Northwest — period,” said Tony Bloom, Mohawk's president and CEO.

Bloom said it “ranks up there with anything in the world” in complexity.

Taking flat metal plates and creating intricate, round, connected spheres that are precise enough to have glass panels installed on them takes lots of skill, he said.

Mohawk was a subcontractor to Supreme Steel of Portland, the major fabricator on the project. Supreme built the spider-web-like structure of the spheres, Bloom said.

The outside skeleton of the spheres is made of hollow-shaped tube steel from Supreme that is connected using curved pieces of steel plate provided by Mohawk. To create the connections, Mohawk used high-speed lasers to cut flat metal plates. Computer-controlled press brakes then twisted the curved connections into a helix shape that was welded to the end of the tube steel to form the structure.

Mohawk supported the project with custom processed and fabricated steel.

It used lasers to manufacture most of the parts for several thousand feet of brushed stainless handrails for the elevated platforms and walkways. A lot of that railing is curved to match the diameter of the spheres.

The company also provided the heavy steel fabrication and detailed finished components for an architectural sweeping stairway that rises up in the middle of the spheres. Additionally, it built the steel-framed triangular-shaped decorative canopies at the entry.

The firm also built the embedded structure of carbon steel that went into the concrete under the spheres. That structure supports the large steel arches that are between the spheres, Bloom said.

Mohawk fabricated the parts for the project in its factories in Eugene and Vancouver and trucked them in for Sellen Construction, the general contractor, to install. Final assembly of some of the parts had to happen on site, because of their size, Bloom said.

NBBJ was the architect for the spheres and Magnusson Klemencic Associates was the structural engineer.

Bloom said his company competitively bid the job about two years ago, started work in September of 2016 and finished in December of 2017.

Mohawk Metal was founded in Eugene in 1987 and expanded into Vancouver seven years ago. It has about 120 employees, most of them skilled craftsmen. The company supports over a dozen industries with steel processing, steel fabrication and robotic welding.

Bloom said the spheres are among Mohawk's top five jobs in terms of the amount of steel provided. Its largest project was for the rapid transit system in Eugene. Mohawk also provided steel for the monorail between Oakland and San Francisco. Locally, it is supporting Sound Transit light rail.