Structural engineer rides out 7.0 quake in Anchorage, then inspects for damage 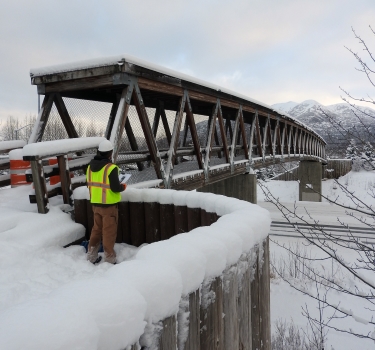 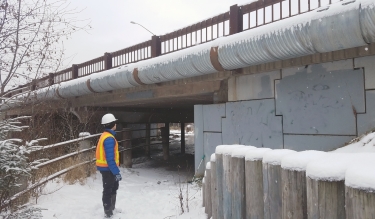 [enlarge]
Stantec engineer-in-training Riley Bronga is part of the inspection team reviewing damage to a bridge over Campbell Creek in Anchorage. 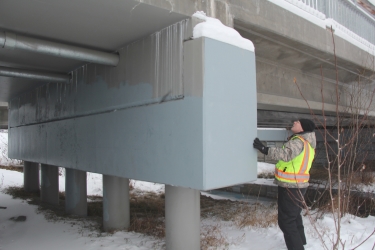 Friday, Nov. 30, began like any other work day. As the clock neared 8:30 a.m., I had just printed a document and walked to the nearby printer to retrieve it. Lost in thought on the way back to my desk, I was startled when the floor moved beneath my feet.

Southcentral Alaska is no stranger to ground tremors, so everyone in the office paused to see what would happen next. Would this tremor fade away like so many others, or would it continue to build? A few seconds later we all had no doubt, THIS was the earthquake for which all our drills had prepared us.

During the earthquake, my entire universe was that small space around me. I never made it to my office to crawl under my desk. Regular office sounds were replaced with slamming cabinet doors, equipment moving back and forth, and the rumble of a 7.0 magnitude earthquake.

I braced myself in the doorway as Mother Nature did her best to throw me to the floor. After a minute — which felt like an hour — the violence ebbed to a gentle rocking.

My universe, like the Big Bang Theory, began to expand rapidly. Being a structural engineer and part of our emergency response group in Stantec's Anchorage office, I made a sweep of the office looking for damage or injuries.

Many people were still safely under their desks while light fixtures swung to and fro overhead. Excited voices could be heard here and there, but mostly everyone remained calm. One person called to me to ask if we should all evacuate. My reply was to remain under the desk until the stairs and lobby had been checked for damage.

I was able to add that earthquakes are “social animals, which travel in herds” — and we could expect a large aftershock at any moment. Before my words faded, the building began to shake violently again.

Naturally, our first thoughts went to the safety of those nearest us. Moments later, we all began to worry about our family, extended family and other friends. Cellphones were alive with calls and text messages.

Fifteen minutes later we all knew that the significant people in our lives were scared, but safe. Our office leadership instructed us to leave the building and go home or wherever we were most needed. People shared what they had learned from their family and friends so that by the time we were directed to leave the office, we already knew which roads were damaged and routes were impassible.

The first damage assessment reports came, not from the engineering community, but from the public via cell calls and social media posts. The first radio reports following the event were based on this informal reporting network. I am certain that the information gathered by the public helped the emergency response center focus their efforts to get professionals to those areas most in need.

Anchorage began to rebuild almost immediately. By the end of the first day, contractors were poised to start excavating and rebuilding Anchorage's major highways. Anchorage has only one highway north and south from the city, so getting those two routes open again was vital to recovery.

Most of the damage associated with the earthquake was attributable to poor soils. Ten thousand years ago or so, vast glaciers moved tremendous volumes of gravel down from the mountains to areas that are now Anchorage and its surrounding communities. As the glaciers retreated, the lakes that were left behind created small pockets of silty soils. Any heavy structure that was built over one of these pockets of poor soils sustained some damage. Everything else that was built on good gravel went mostly unscathed.

Within hours, teams of engineers and other professionals started surveying major highway structures and important buildings like hospitals, fire stations and emergency response shelters. Alaska was already on the mend. Rebuilding was important to our emotional recovery as it demonstrated that we were again in control of our lives.

Out of adversity comes opportunity. As a structural engineer, I was able to study the earthquake damage firsthand — buildings, bridges, retaining walls, weirs and homes.

Most of what is now Anchorage has been built in the last 50 years, much of it after the 9.2 Good Friday earthquake in 1964. Nearly everything built here is based on the same codes that are used throughout the United States; the codes that were inspired by the devastation caused by earthquakes in other regions. According to geologists, the Nov. 30 earthquake was the most powerful tremor in the Anchorage area since 1964.

Assessing the damage was like grading a final exam for building codes. The engineering community wondered what our final grade would look like.

Honestly, our grade on the final depended on how much damage we discovered. Each day we leave the office, grade another structure, and generally award another passing point. Yes, we have damage that shows how buildings, bridges and other structures were violently tested in the quake. We found hairline cracks in bridge girders, building foundations that moved slightly, and cracks in wall finishes. Each of these blemishes is testimony that the structures were stressed, but they met the challenge. We didn't get a perfect grade, but we did quite well.

Even our older structures that have been seismically upgraded passed the test. In the last 50 years, the engineering community has learned a great deal about building more seismically resistant structures. We now realize that some portions of structures must be tied together while other portions are allowed to move.

A basic tenet of modern codes is that any portion of a building that is designed to move should never be allowed to fall. Unfortunately, building codes do not require owners of aging structures to seismically upgrade their structures; but I firmly believe that any effort to retrofit a structure, regardless how small, greatly reduces seismic damage and, more importantly, enhances the life safety and resilience of the community.

Anchorage has made a concerted effort in recent years to retrofit any structure that contains unreinforced masonry. As a result, this earthquake saw very little damage from collapsing masonry.

Seattle, too, has focused on retrofitting older structures built with unreinforced masonry or brick, including many constructed after the Great Seattle Fire.

Eradicating hazards like falling masonry allows a community to begin its recovery immediately rather than focusing on search and rescue.

Alaskans pride themselves on their tremendous spirit in the face of adversity. I attribute our recovery from the 2018 Anchorage Earthquake in part to our spirit and being prepared for the big one. Anchorage appears to have significantly less catastrophic damage after this earthquake than other cities have experienced in recent events.

More importantly, we had few injuries and zero deaths associated with this earthquake. I believe every community has a similar sense of self-reliance and strength that Alaskans share. My hope is that the lessons learned from the 2018 Anchorage Earthquake will help others prepare for less damage and focus more on recovery.

Bruce Hopper is a senior structural engineer with Stantec in Anchorage, Alaska. He has lived and worked in the state for more than 30 years.