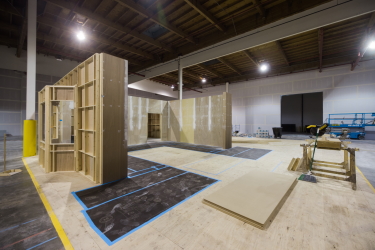 Photo from King County [enlarge]
Stages, sets and shops were built inside the old warehouse.

Fisher Flour Mill is ready for its close-up.

The county recently wrapped on a renovation of Fisher Flour Mill — spending $1.5 million on a project that county officials hope will bring “hundreds of family wage, creative economy jobs” to Seattle, according to a county press release.

The county purchased the flour mill, which sits on a 12-acre Harbor Island property, about 20 years ago for $8.5 million. The mill was last used in 2002 for flour milling.

“We transformed this vast warehouse into a creative space with stages, sets and shops to put hundreds of people to work in good, union jobs making films right here in King County,” said County Executive Dow Constantine in the release. “This is about making a smart public investment to help this creative industry grow and thrive here in King County.”

Seattle has served as a backdrop for Hollywood hits such as “Sleepless in Seattle” and “The Fabulous Baker Boys,” and for television shows such as “Northern Exposure.” But Seattle has also shared the spotlight in recent years with Hollywood productions in Vancouver, B.C., and Portland.

For its part, the Fisher Flour Mill sound stage is already being used for a production, although the county did not give the name of the show for privacy reasons.

“A large-scale sound stage is something that has been on the wish list of those in our local film industry for decades,” she said in the release. “It will allow for year-round, union jobs, along with the cultural benefits and significant economic impact that an active production hub provides.”

“The biggest challenge,” Wright said, “was getting it done quickly. King County has used the mill mostly for warehousing and storage over the last several years, so it was essentially a blank slate to work from.”

Wright said the county added two transformers to the building. The previous electrical system, he said, was adequate for a warehouse-type facility, but film and TV production usually requires a lot of lights and other equipment that use more power. So the county upgraded the system to provide that extra power.

He said experts in the film industry and people on Constantine's Film Advisory Board helped determine how to best renovate the mill for film and TV productions.

Wright said this was a typical construction job, with crews using the same kind of lumber, drywall and other materials seen in any other construction project.

“What made it a little bit unique is that we had to install what was essentially double walls with sound-deadening insulation between them around each of the two sound stages,” he said. “We also installed vestibules to control sound for people entering and leaving the stages.”

The renovation included checking for hazardous materials prior to work starting, “but nothing was found that was of concern,” Wright said.

Constantine said he hopes the sound stage project will keep Seattle in the mix, when producers and directors are looking for settings outside Hollywood.

“We don't want Vancouver or Portland or Atlanta to keep serving as Seattle's stand-in,” he said. “We're ready to spotlight the amazing talent of our region.”

Seattle-based Pulcon Inc. was the general contractor for the project. Pulcon specializes in tenant improvements and has built out spaces for Cherry Street Coffee House, Top Pot Doughnuts and others.