It's like the design equivalent of “Seattle nice.” Sometimes we expect new buildings here to match their surroundings and just fit in — or even disappear — along with the people inside them.

That's not going to happen with two towers designed by Perkins + Will for the corners of neighboring blocks in downtown Seattle.

There is a bit of one-upmanship going on with tall buildings, as there has been in every growing city for more than a century. But these towers are worth a closer look for what they do with their height.

Sure, they flaunt it — a little or a lot, depending on where you stand. There are spaces in high places for gathering. People can see and be seen, look out and look up from the ground. Each is transparent in strategic places. 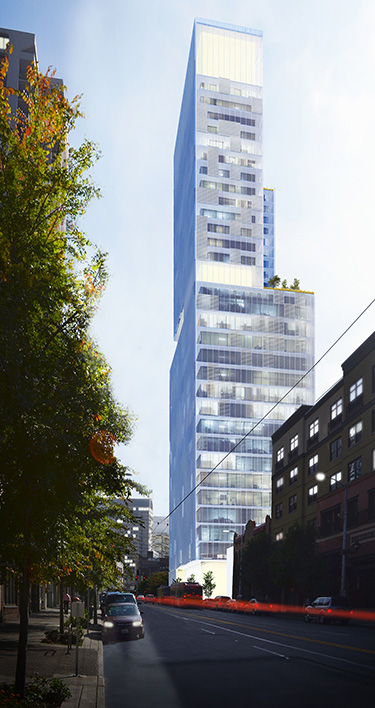 Images courtesy of Perkins + Will [enlarge]
Third and Lenora draws the eye upward with a conservatory at the top. 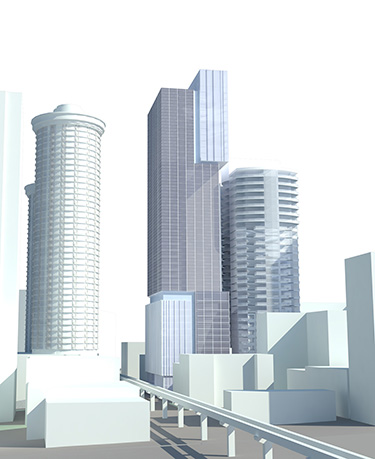 [enlarge]
In this image of 5th and Virginia, the Escala condominium tower is on the right and The Westin Seattle is on the left. 5th and Virginia could have a tall transparent section at the top and another on the opposite side at street level. 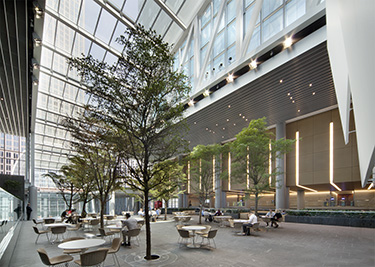 [enlarge]
Large, enclosed spaces like this for gathering and relaxing are likely to be part of some towers under construction here. 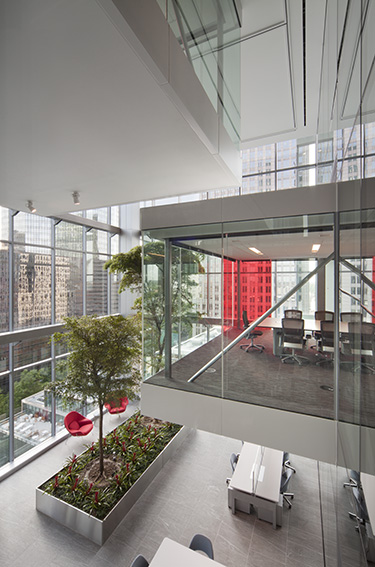 [enlarge]
Perkins + Will designed this multi-story space with glass walls for a financial services client.

One is 5th and Virginia, a 45-story tower at 1933 Fifth Ave. being developed by Douglaston Development of New York. In the concept phase, the project has retail on the first two floors, 160 hotel rooms on the next eight floors and 394 apartments on the 32 floors above.

The other is Third and Lenora. Martin Selig Real Estate plans the 31-story building at 2031 Third Ave., with 380 residential units and 169,000 square feet of office space. The project also will have two retail spaces at street level. It's still early enough in design that any of these numbers may change, according to architect Erik Mott, who is heading Perkins + Will's design for both buildings.

The buildings are going through design review, and are expected to start construction next spring.

Not just a rectangle

In their current form, they are supremely rectilinear, but not simple. They don't go in for decorative tops, like the historic Smith Tower or the post-modern Second and Seneca (Ban Roll On) Building.

But they don't just stop at the top, either. In the favored concept presented to the downtown design review board last month, the transparent part of 5th and Virginia is almost like a building set into a building, a “jewel” slightly offset from the top on the west side. That's balanced by another tall, transparent piece at the base on the east side, looking out at the Seattle Monorail. Activity on different levels inside the clear walls, including a lobby and retail, will visually extend the public feeling of the street.

According to Mott, the glassy jewel at the top of 5th and Virginia could be as much as 13 stories high. Inside will be residential units with “premier views,” along with a bar and possibly a multistory amenity space.

Mott calls the tall, glassed-in space at the top of Third and Lenora a conservatory, and it's shown with trees that will be visible from the street. It will be an amenity for all occupants, he said, and could house a conference space that opens onto the enclosed area.

Tall buildings like these test current zoning laws, passed by Seattle City Council in 2006, that are intended to encourage the construction of housing in the urban core. Residential towers don't face the same strict limits on bulk and scale that commercial and office buildings do.

But 5th and Virginia, in particular, is taking flak. Residents of the neighboring 30-story Escala condominiums packed a design review meeting last month, expressing their fears about the tower that will go in just across the alley to the east.

It does promise to be close. The walls may be as little as 18 feet away in some places at the base, across the alley. (Notes from the design review meeting say 16 feet, but the architect disputes that assessment.)

In their desperation to fend off these walls, some people at the meeting became on-the-spot design critics, taking turns calling the model an ugly modern box. They said the designers of 5th and Virginia had ignored its context.

The walls should be curved — like Escala's own elliptical ones and the tubular towers of The Westin Hotel across the street. Also, the tall, straight walls shown in the model should be broken up with some kind of detail, preferably something historically correct. How about some “authenticity,” like brick veneer here and there?

Urban strategist Peter Steinbrueck is working for residents of Escala who seek relief from crowding through design review. He agrees that the architectural decisions on 5th and Virginia are not the cause of their problem. It's the zoning.

Ironically, Steinbrueck was on the Seattle City Council when the current laws were passed. He said he objected at the time that there was no provision for spacing towers, but there was an overwhelming consensus that market forces would prevent the kind of close wall now seen between 5th and Virginia and Escala in preliminary concepts for the new building.

Meanwhile, the design review report for 5th and Virginia contains comments about close clearances, and dutifully records the pleas for a less modernist design.

Now in the “schematic” phase, the project is due for a second presentation to the design review board on Nov. 3.

Mott is weathering the tough review climate, and looking for higher ground.

“We don't shy away from design discourse,” he said. “At the end of the day, we need to respond with something substantive.”