7 trends that will shape the future of green building

Green building seems to be here to stay, but what lies on the road ahead?

With all the changes afoot today in both the real estate economy and local and federal government, many may be wondering how to position themselves for emerging sustainable development issues. I see the following key trends informing the road ahead for green building, impacting both the public and private sectors.

Who hasn’t hopped on the “green bandwagon”? With the explosion of sometimes conflicting claims, options and definitions, the industry has become confused.

Simple, clear, recognizable and credible labeling or certification programs can help to address marketplace confusion and inform consumer choice. Buyers will trust an unbiased seal of approval (such as that used in organic food labeling, for example), rather than self-proclaimed achievements. This is one of the reasons that LEED and Green Globes are both in the process of undertaking ANSI (American National Standards Institute) accreditation of their standards. 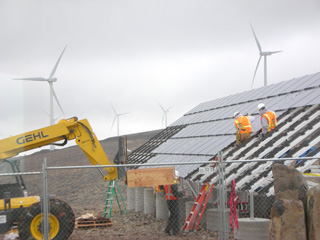 Photo by Lucia Athens
A work crew assembles photovoltaic panels at the Wild Horse Wind Farm in Kittitas County. The green building industry currently has a shortage of skilled construction and maintenance workers.

At the same time, there are many shades of green. A diversity of tools with varying point-of-entry stringency may be healthy in that the net benefits of wider adoption of less-rigorous standards may still be positive. However, clarity for investors about exactly what it is they are buying, or what the standard that government may sanction represents, is crucial for the sake of clarity, transparency and scrupulousness.

As we begin to shift towards a carbon economy, significant price signals will reinforce an increased focus on green building.

In late January, the Securities and Exchange Commission adopted new requirements to include climate change issues in investment disclosures of material risks. We are finally waking up to the fact that there may be a lower demand for products with a large greenhouse gas footprint, or investments that could be impacted by climate disruption side effects such as rising sea levels. In addition, developers will see energy efficiency and carbon offsets as part of their overall investment strategy, which will make them financially competitive with other investment options.

Even though Seattle City Light recently raised utility rates by almost 14 percent, we still have electricity costs that are some of the lowest in the country. City Council recently passed an ordinance requiring annual energy use disclosure for all non-residential buildings of over 10,000 square feet and all multifamily buildings of five units or more.

(Editor’s note: This article has been corrected. The original version incorrectly said that Green Globes does not include third-party certification. Also, the author intended to say that Seattle City Light customers have some of the lowest electricity costs in the country, not in the county.)

Information is power; this data will be made available to all residents, buyers and lenders to help inform their purchasing and investment decisions. According to the city, this initiative is expected to drive the implementation of building energy efficiency upgrades as well as create 130 jobs.

The fact that fewer new construction projects will occur in the foreseeable future allows us to focus more on existing buildings. Much of our building stock is in need of upgrades to bring it in line with current standards of health and efficiency. 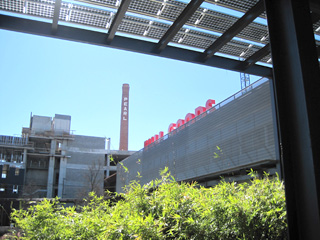 We have the tools at hand, such as LEED for Existing Buildings and Energy Star, to help us avoid throwing our precious energy resources out the window. Rick Fedrizzi, CEO of the U.S. Green Building Council, recently wrote in the Huffington Post that “there are about 120 million existing homes in the U.S., and about 5 million commercial buildings comprising more than 71 billion square feet of space. And virtually every one of them is an energy hog.”

Renovating historic buildings in order to address energy efficiency and climate disruption is a challenging puzzle that also represents great opportunities. In San Antonio, the historic Pearl Brewery has been renovated to create a LEED mixed-use project including restaurants, retail, offices, live/work apartments and the local AIA chapter’s Center for Architecture. The project boasts not only the state’s largest solar installation at 200 kilowatts, but also a farmers’ market and a Culinary Institute of America branch.

Closer to home, the Preservation Green Lab, headquartered in Seattle, is an initiative of the National Trust for Historic Preservation. The Lab is focused on developing public policy and building codes to solve historic-retrofit challenges, and to demonstrate solutions with pilot projects.

Tenant improvements are another area that will maintain an ongoing focus in spite of the downturn. With increased competition in a soft office market, new leases will be signed and others renegotiated.

With these changes come a myriad of tenant-improvement projects that can have significant environmental impact. Many renting class A office space believe that LEED is the new standard that defines that tier within the marketplace.

We can put people to work repairing aging buildings and infrastructure with a green focus in order to rebuild a more resilient country. One of the gaps that continues to exist in the green building industry is workforce development of skilled construction and maintenance workers to build and manage contemporary facilities.

South Seattle Community College recently graduated its inaugural student class in the Conservation and Weatherization Continuing Education program, developed in partnership with the city Office of Economic Development. They also recently started developing courses in Energy Auditing, Building Sustainability Management and a pre-apprenticeship program for low-income youth to help them gain skills needed for green building and energy-related jobs. For the DIY crowd, the college even offers classes on how to how to make your own biofuel or how to retrofit your car to run on biofuel or electricity.

Many public works projects, such as parks and infrastructure, have not received much attention in the green building dialogue, and tools like LEED do not currently apply to them.

Long an ignored problem, the challenge of repairing our country’s ailing infrastructure is finally receiving focus. Traditional water, energy and transportation systems use vast amounts of energy and have large greenhouse gas footprints.

The American Society of Civil Engineers estimates that $2.2 trillion is needed for infrastructure repairs. When this centralized infrastructure fails through age, lack of maintenance or catastrophe such as Hurricane Katrina-sized storms or Haiti-sized earthquakes, less monolithic and more distributed approaches should be pursued as a part of the rebuilding efforts.

Many green infrastructure solutions occur at the site level or tie together benefits from multiple utility areas, defying the way we traditionally plan and design infrastructure systems. Some of the most promising approaches include district energy systems that may utilize warm or cool water via thermal piping networks, on-site water treatment systems such as membrane bioreactors, sewer heat recovery that recaptures energy from domestic use, and natural drainage solutions that keep stormwater from causing combined sewer overflows.

Almost a third of the land in Seattle is public property, mostly in the public right of way. It’s time to put that land to work doing more than just moving cars around and providing a conduit to dump waste into Elliott Bay.

Climate change is likely to intensify water problems by raising temperatures and decreasing snowpack. Shortages may relate not only to drinking water but also to irrigating our food supply. The Southwest is rapidly drying up and is likely to experience a water crisis of epidemic proportions in the near future. In addition, water quality is increasingly becoming an issue in some parts of the Northeast, where tap water is no longer safe to drink.

The solutions to these problems do not lie in tightening regulations. Rather, we must expand our way of thinking about how we use water and our relationship to it.

Why on earth would anyone use drinking water to flush toilets? In some parts of the world, the absurdity of this idea is patently obvious. But for some reason, we Americans have a blind spot when it comes to water reuse.

Here in King County, even if you choose to treat your own wastewater on site, you are still forced to pay expensive connection charges. Even though the rationale for this is the need to pay off the costs of building the Brightwater treatment plant, this effectively creates a disincentive for developers to invest in water reuse. A “pay to play” approach for those projects willing to take on the risks of building and managing their own systems might encourage the kind of innovation we need to see in water reuse.

Seattle is slowly getting focused on local food issues, catching up with cities such as Portland and Austin, Texas. Mayor Mike McGinn and the City Council recently announced 2010 as “The Year of Urban Agriculture” in conjunction with a visit by Will Allen, a former professional basketball player and recipient of a MacArthur genius grant for his work in urban farming in Milwaukee. Allen noted that it’s time to stop talking about things and to start doing them.

What about this idea?: Create an urban farm in the heart of downtown on the derelict site of the former Public Safety Building (across the street from City Hall).

The huge hole in the ground is the result of a public/private development project that has now been stalled for years. Not only could the eyesore be beautified, downtown workers could grow produce for local food banks while getting exercise during their lunch breaks.

We can hope to see more urban food projects like this one, as well as food security policies and changes in land use codes to remove barriers and create incentives for growing more of our own food here in the Emerald City.

Lucia Athens is senior sustainable futures strategist with CollinsWoerman Architecture and Planning in Seattle, and previously led the city of Seattle’s green building program. This article is based in part on her new book, “Building an Emerald City: A Guide to Creating Green Building Policies and Programs.”