A Tacoma Housing Authority redevelopment is looking to become the first federal Hope VI project to achieve a LEED for Homes platinum rating in the U.S.

The agency is striving to set a new standard in affordable housing for Salishan 7, the seventh and final phase of the Tacoma’s 1,300-unit New Salishan redevelopment. Salishan 7 will include 91 residential units for people earning below 50 percent of median income, or $34,050 for a family of four. THA is the owner, developer and property manager.

The agency’s vision for the redevelopment was to create something “lovely,” according to Executive Director Michael Mirra. In 2000 THA received a $35 million Hope VI grant, and work began.

The state issued a mandate in 2008 that entities receiving funding awards from its Housing Trust Fund build their projects more sustainably.

Walsh Construction Co., with THA, looked beyond what was required by the state and sought to achieve the highest standard. Walsh conducted exploratory work in the design phase with McGranahan Architects and the project’s sustainability consultant, O’Brien & Co., and determined that the project as designed met Pierce County’s Build Green two-star rating. 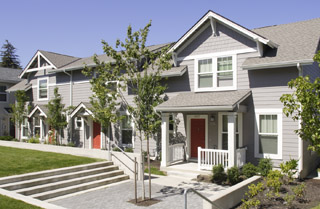 Photo by Sally Painter [enlarge]
Tacoma Housing Authority upgraded the building envelopes for the final phase of its Salishan redevelopment. These homes were built in an earlier phase.

In an effort to go beyond this, Walsh conducted research to determine both the strategy and estimated associated costs to achieve various LEED ratings. After considering the options, THA chose to pursue the most challenging goal: LEED for Homes platinum.

In order to meet its goal, THA started by upgrading the inefficient electric resistant baseboard heaters that had been specified in all the previous phases of Salishan with a ductless mini-split heat pump system for each of the new homes. This highly energy-efficient system is estimated to be at least 150 percent more efficient than the standard baseboard heating system.

More important, THA upgraded the building envelope. An air barrier system was recommended to tighten the envelope and reduce air infiltration. THA added insulation at the foundation and increased insulation all over, exceeding the current International Energy Conservation Code standards by more than 5 percent.

Salishan 7 includes many other sustainable elements: parks, public transit, walkable neighborhood, sun-reflecting concrete, high-density occupancy, and engineered bioswales that capture 98 percent of the stormwater. The development provides a healthy environment for the tenants, including features such as enhanced ventilation, hard-surface flooring, and low-VOC and no added urea-formaldehyde materials.

The project provides an opportunity to compare actual costs and savings due to energy efficient enhancements. By comparing these upgraded homes with the prior homes built on this site, a case study comparison can easily be made.

WSU, with the help of O’Brien & Co., put together an energy model of a typical Salishan 7 unit and found that these buildings are 30 percent more efficient than a comparable home built to code. To put this in perspective, these energy efficient measures are equivalent to removing 27 homes from Tacoma Power’s electrical grid.

The agency understands all of these improvements must be maintained. Therefore it is currently planning a comprehensive training strategy for both property management and future occupants to capture and maintain the energy improvements. 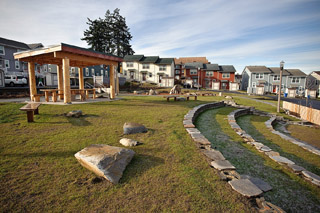 Thus far, the Tacoma Housing Authority has encountered a number of challenges meeting its goals.

The toughest one is that all of these enhancements have a high initial upfront cost. The long-term benefits and savings clearly outweigh the initial costs. However, overcoming the initial costs is always a challenge.

Affordable housing developers are generally nonprofits. The vast majority of current tax credits and incentives apply only to “for profit” organizations, so they are not applicable to this project. Additionally, there are few grants that support nonprofits and the grants that do are highly competitive.

The second challenge is that there are few incentives for nonprofit organizations in new construction.

In fact, nonprofits cannot take advantage of virtually any current incentive. Compounding this fact is that there are no incentives at the federal or state level, or even through many public utilities, for nonprofits in new construction to enhance either the building envelope or install highly efficient heating systems. This lack of support typically results in the construction of less energy efficient and less healthy homes.

The third challenge is the nature of rental housing and rotating clientele that nonprofits serve. These homes must be durable. The cost of repairing and maintaining these homes is significant.

There are two methods that, when combined, meet this challenge. The first method is to choose products that are durable and long-lasting. The second method is to have a solid training regime for both building management and tenants on the LEED for Homes features. Training keeps costs down and provides tenants the opportunity to reap the benefits of energy efficiency through lower utility costs.

Salishan 7 infrastructure is virtually complete and vertical construction will begin soon. The Tacoma Housing Authority is excited about this last phase. The Salishan redevelopment has already gained national attention and recognition. Salishan 7 is the capstone of this redevelopment, setting new standards in affordable housing and for housing in general.

Derek Johnson is a superintendent at Walsh Construction Co.