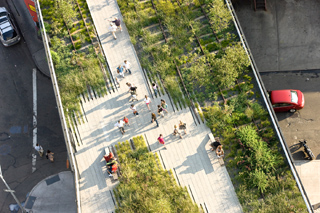 Images courtesy of James Corner Field Operations [enlarge]
The design firm says the High Line has “an other-worldliness that preserves the strange, wild character of the artifact.”

The firm says the project promotes principles of ecological sustainability, urban regeneration and adaptive use.

The first nine blocks of the High Line opened in June of 2009 to great acclaim. The next 10 blocks are set to open in the spring of 2011.

The space combines preservation and innovative thinking to create an urban corridor for habitat, wildlife and people. The park provides valuable open space in New York City and also acts as an economic generator for the neighborhood. The firm says the park has stimulated investment in new cultural institutions, as well as commercial and residential development. 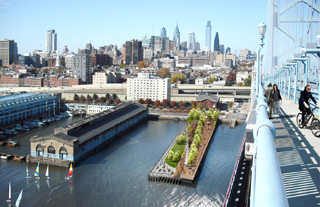 Photo courtesy of James Corner Field Operations [enlarge]
Race Street Pier is the first new public space on Philadelphia's Central Delaware Riverfront. The goal is to reconnect the city to the river and transform the underused waterfront.

The design team’s goal was to turn the industrial transportation conveyance into a post-industrial instrument of leisure. In contrast to the activity in nearby Hudson River Park, the firm says the linear experience of the High Line landscape “is marked by slowness, distraction and an other-worldliness that preserves the strange, wild character of the artifact.”

The firm said it was essential to preserve the High Line’s unexpected beauty, but it was equally important not to underestimate the intended use, popularity and scale of this project as a new public space. The park has varying ratios of hard and soft surfaces that transition from high-use areas where the surfaces are hard to vegetated spaces where they are soft. Experimental gardens are located in between.

James Corner Field Operations has worked on a number of other projects including preparing a redevelopment and renewal plan for eight square miles along the Delaware River in North Philadelphia, and redesign of the historic South Street Seaport at Pier 17 in Lower Manhattan with SHoP Architects.

James Corner also worked on Race Street Pier, the first new public space in Philadelphia on the Central Delaware Riverfront. The goal is to reconnect the city to the river and transform Philadelphia’s underused waterfront. The design splits the pier into two levels: an upper level with a grand sky promenade and a lower level for water-related activities and passive recreation.

A ramp rises along the north face alongside the Ben Franklin Bridge, dramatizing the sense of arrival at the river.