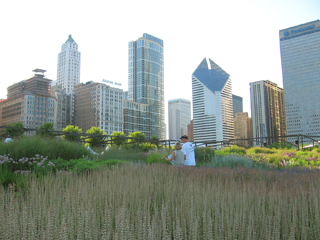 Images courtesy of Gustafson Guthrie Nichol [enlarge]
Lurie Garden is the site of many kinds of public activities, from music performances to classes on gardening and outdoor fitness.

A city website says the space pays homage to Chicago’s motto, Urbs in Horto, or city in a garden. The motto is a reference to Chicago’s transformation from a marsh to a bustling metropolis.

Lurie Garden is between the Art Institute of Chicago and Millennium Park’s great lawn. It serves as a neighborhood park, and an urban refuge for birds and butterflies. The park gets a lot of traffic, and is visited annually by 4 million people.

Lurie Garden tells the history of Chicago’s urban shoreline while allowing visitors to experience dramatic aspects of the city’s native landscape. It has a number of components including a dramatically lit, 15-foot-high “shoulder” hedge, which encloses and protects an interior garden; and a boardwalk above some pools that leaves a five-foot-wide exposed surface of water. 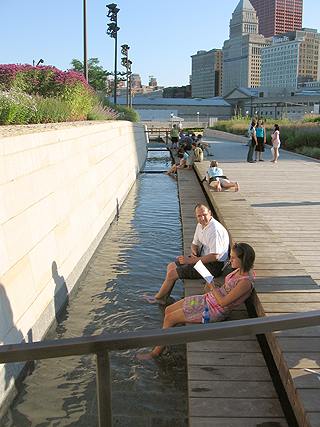 [enlarge]
Lurie Garden is a tourist destination and event space as well as as offering quiet respite for nearby residents and wildlife.

It is located above a parking garage.

The garden is the site of many different kinds of public activities, from music performances to classes on gardening and outdoor fitness. The space was designed to accommodate crowds of up to 12,000 people exiting from adjacent concert venues.

It was designed to become an international symbol of Chicago, providing a tourist destination and event space as well as offering quiet respite for nearby residents and wildlife.

The firm says the garden distinguishes itself from other Millennium Park attractions by using plants and local materials to create a cultural space. 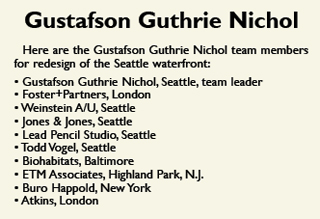 Locally, the firm was landscape architect for the Bill & Melinda Gates Foundation campus and the campus’ garage, which has a 1.4-acre green roof.

Other local GGN projects include the Seattle Civic Center, Kreielsheimer Promenade at McCaw Hall and the second phase of the University of Washington School of Medicine.

Though all waterfront teams have members from Seattle, Gustafson Guthrie Nicol is the only team leader based here.