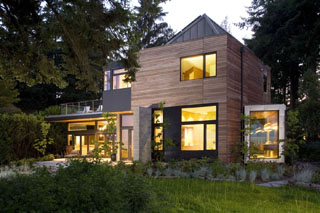 Photo by Roger Turk [enlarge]
The 2,500-square-foot Ellis house uses 70 percent less energy than a typical house of similar size. The site was rehabilitated with native and drought-tolerant vegetation and pervious pavers.

Joanne and Ed Ellis wanted to create a home that was modern, educational and sustainable.

Perched high on a Bainbridge Island bluff, their home was among the first LEED platinum residences to be built in Washington state outside Seattle. 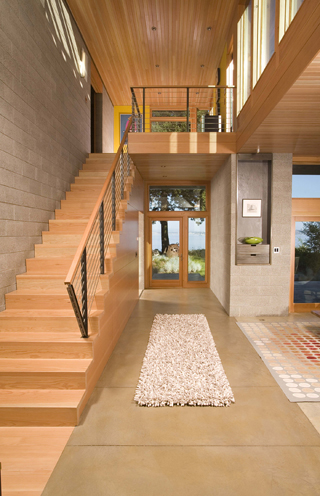 Architect Mathew Coates, president of Coates Design Architects, was determined that the home would be committed to sustainability from start to finish.

“This is a new way of building that requires a new process,” he said. “You can’t look at building a green home like you do a conventional home and just slap all this green stuff on it.”

The commitment started with the homeowners and architect, but the contractor and subcontractors also had to be “all in.”

“Their willingness to alter decades of traditional construction and learn sustainable construction practices was paramount to the success of the project,” said Coates.

Coates made sure that the project’s ecologically small footprint went beyond just the construction of the Ellis’ new home.

The site had an existing structure on it that was carefully taken apart and recycled, diverting 98 percent of its building material from the landfill. Before construction began, subcontractors created detailed lists of framing and sheathing to more accurately place their lumber orders to reduce waste.

Additionally, the contractor tracked all waste and recyclable material on the site to provide a 75 percent landfill diversion rate. Interior trim and stair material originated from site-milled fir trees that were fallen from a neighbor’s property.

The site was rehabilitated with native and drought-tolerant vegetation and pervious pavers. The crest of the bluff was restored with plantings to reestablish habitat and to prevent erosion. Extreme care was taken to preserve natural habitat and existing trees throughout the construction process.

The entire house is oriented to capture sun and shade and designed to passively heat and cool itself. 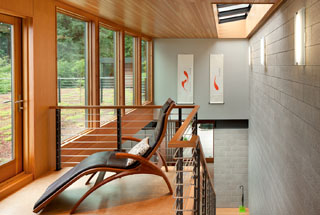 Photo by Lara Swimmer [enlarge]
The entire house is oriented to capture sun and shade, and designed to passively heat and cool itself. 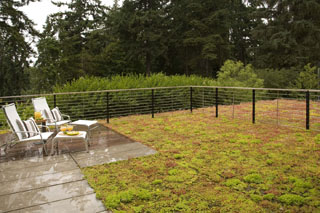 Photo by Roger Turk [enlarge]
The roof has a vegetated garden patio and serves as insulation. 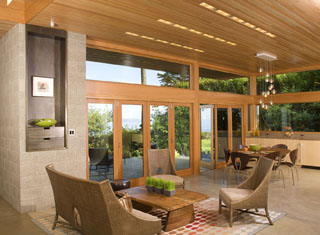 Photo by Roger Turk [enlarge]
Spaces were designed with multiple functions to allow the house to fit a smaller footprint.

A large east-west wall forms a central thermal mass core for the house. This wall reduces temperature swings, working with operable skylights to absorb heat in the winter and release it in the summer.

In addition, this wall sets up a division between private and public spaces. To the north, the private portion of the house is much more enclosed. To the south, the glassy public spaces have abundant natural light and views. To the east, the water side of the house, windows and doors open to allow the naturally cool breezes from the Sound to temper the interior spaces.

Coates also created spaces with multiple functions in order to achieve a smaller overall footprint. For example, the washer, dryer and clothing storage are built into the master bathroom casework, and there’s an office tucked into a corner of the media room.

The roof became a vegetated garden patio providing a place to relax — and greater insulation. There are also sliding and bi-folding doors that transform smaller rooms into larger gathering spaces that can be easily connected to the outdoors.

“Every room in the house serves at least two functions, and usually four or five,” said Coates.

Going green is paying off for the owners: The 2,500-square-foot home uses 70 percent less energy than a typical comparably sized home.

The home can serve as a model and educational tool for future sustainable residential projects. During construction and after they moved in, the Ellises hosted open houses to inspire others to embrace sustainability.

“It became obvious early on that Joanne and Ed wanted to do more than just build green,” Coates recalled. “They are active role models for sustainable living.”

The Ellis’ are proud that their home raises the bar for environmental commitment in design and construction, but more importantly they hope it will inspire others to embrace sustainability in their own homes and lives.

Eric Knudson is a Seattle writer and principal of Basecamp Communications.