Bullitt draws power from an unexpected source: the sun

“Isn’t it too cloudy in Seattle?”

Net-zero energy is also one of the seven performance areas, or “petals,” of the Living Building Challenge green-building certification program. While easier to achieve in other areas of the country, a number of conflicting conditions in the Pacific Northwest make it difficult to attain net-zero energy on large-scale buildings such as Seattle’s new six-story Bullitt Center.

At first glance, Seattle seems an unlikely place to design and construct a net-zero energy building because of its 226 gray days per year. Generally, energy to power living buildings relies heavily on available solar income, and those gray days are not exactly conducive to powering a building from solar energy. 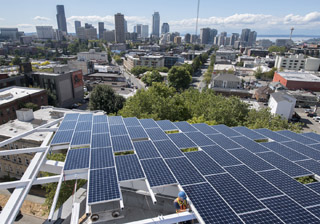 Photo by John Stamets [enlarge]
Photovoltaic cells on the roof can generate energy even when it’s cloudy. The system is expected to produce 230,000 kilowatt hours a year.

However, it’s not the showstopper one might think because photovoltaic, or PV, cells can generate some energy even in cloudy conditions. In fact, while you might think of Phoenix being five times sunnier than Seattle, PV only generates about twice as much energy in Phoenix as it does in Seattle. Germany is a world leader in solar energy even though much of that country is cloudier than Seattle.

Once we on the design team overcame our preconceived notions about how much energy could be generated in a cloudy climate, we began to see the advantage that Seattle’s relatively moderate year-round climate provided. Ultimately we found we could reduce the center’s demand for energy, especially heating and cooling, to within a net-zero framework.

Our primary concern was whether it could be done. Once we determined it was technically feasible, we needed to determine if it could be done cost-effectively within existing building codes.

In Seattle, the very low cost of electricity and the reduced PV power production due to cloudy days leads to a longer payback period for net-zero energy buildings. Despite this, net-zero buildings still have significantly lower life-cycle costs over the life of the building.

As for building codes, we were acutely aware that prototype projects such as this are designed to explore extreme possibilities. Code variances and budget-impacting work-arounds would be required to achieve desired public outcomes.

One reason a net-zero energy building has a higher first cost is that it essentially “pre-purchases” 30 years worth of energy bills on “day one” by installing its own energy-generating system on the building. The cost of the PV system is then paid back by not needing to purchase any electricity or natural gas for the remainder of the life of the building. The design brief for this building called for a 250-year building and the final building cost is comparable to an institutional-quality building. 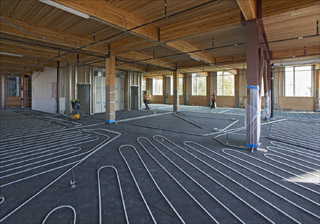 The net-zero design challenge fueled the creative juices of our entire team. The result: The Bullitt Center is projected to be approximately 83 percent more efficient than the typical existing Seattle office building.

It will be one of the most energy-efficient buildings in the nation. The predicted “energy use intensity” is near 16 kilo-British thermal units per square foot annually, which results in annual electricity use of 230,000 kilowatt hours.

All of that electricity will be generated on site with a 242-kilowatt rooftop PV system. To make it all work, the design required a high-performance building envelope. Other critical elements focused on mechanical systems, lighting design and plug-load usage.

Here’s a brief look at the details:

The curtain wall has 4-by-10-foot windows that open and close automatically in response to outside conditions. The windows are located to maximize daylighting and include active external shades to control solar heat gain and reduce the peak cooling load.

Water loops provide in-floor radiant heating and cooling to the office spaces. Ventilation is provided through a dedicated 100 percent outside air unit with an air-to-air heat exchanger, so that incoming fresh air is preconditioned by outgoing air. Night-flush ventilation recharges the air for the next day.

• The center’s large glass areas and skylights provide for maximum ambient daylight. The lighting power density in the office spaces has been limited to 0.4 watts per square foot, less than half the 0.9 watts per square foot currently allowed under the Seattle code. Automatic controls are designed to dim or turn off low-wattage light-emitting diodes when daylight provides adequate illumination.

• Plug loads account for nearly 50 percent of the building’s energy use. As required by a unique tenant lease agreement, electricity for office equipment, computers, monitors, servers and printers are set to a specific energy limit per square foot per year. The design team will help tenants select the most efficient equipment to meet their office needs.

To balance the solar energy available on the site with the demands of the building, the design incorporated a number of innovative solutions that considerably reduced the building’s energy loads. Additional strategies such as an expanded, seasonally appropriate comfort range, extensive plug load control and elimination of phantom loads, combined to reduce the projected energy demand by 83 percent compared with the typical office building in Seattle.

In short, the design and collaboration of the entire Bullitt Center design team showed that net-zero energy is definitely doable in Seattle. And if it is doable in Seattle, we think that it can be done almost anywhere.

Paul Schwer is a principal at PAE Engineering.