Are you ready for some urban farming?

By THE ASSOCIATED PRESS 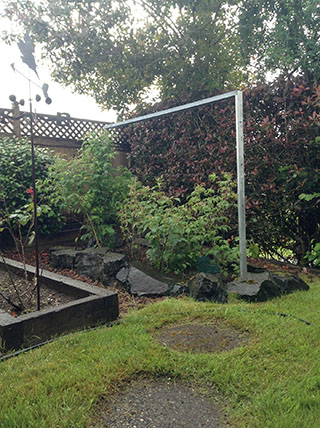 Photo by Benjamin Minnick [enlarge]
Raised beds can be used for growing a variety of plants, such as raspberries (center) and roses (left).

There’s nothing like the taste of a just-picked tomato or an ear of corn that goes from plant to plate in a matter of hours. Country folk have always reaped abundant returns from expansive gardens. Now, more city dwellers are enjoying harvests plucked from tiny but highly productive urban gardens.

New technologies and updated vegetable varieties specifically bred for containers and other small spaces make it easier than ever for urban gardeners to enjoy fresh vegetables.

“The average vegetable travels 1,500 miles before it gets to your plate, so growing your own means you can enjoy much fresher vegetables and hugely reduce energy use,” said Corrie Zoll, program manager for Greenspace Partners, which manages community gardens in Minneapolis, and a board member of the American Community Garden Association.

From the ground up

The first issue for an urban gardener is finding space, be it a high-rise balcony, a small square of land in the backyard or a community garden. The three ingredients vegetable gardens absolutely must have are water, good drainage and sunshine, preferably six to eight hours of sun per day, said Joe Lamp’l, host of DYI’s “Fresh From the Garden.” Other than that, urban gardeners have many choices about what and how they grow.

Growing vegetables in the ground will probably require extensive soil preparation, either with a garden fork or double-digging that breaks the hardpan soil about six to 12 inches below the surface so that roots and nutrients can move through easily. Traditional tilling, he said, is not as good an option because the tines are only four to six inches long, which isn’t deep enough to penetrate hardpan.

Another, less labor-intensive, option is raised beds. Non-pressure-treated wood, concrete block or plastic forms can be filled with rich soil or compost. “Raised beds are the best way to control the type of soil you’re growing in,” Lamp’l said. “Most cities and counties across the country are recycling yard waste into compost that they are happy to give back to gardeners.”

Many governments test the compost for contaminants that may have been inadvertently included in the waste stream, he said. “I’d ask for those reports or have it done myself if they aren’t available.”

Container gardening on balconies — or rooftops in some cases — also is an option for urban vegetable growers. “Many plants, including tomatoes and salad greens, are easy to grow in containers, even in very small spaces,” Lamp’l said.

Thousands of people participate in community gardening, a movement that dates to the Victory Gardens of World War II when food and fuel were tightly rationed. “Victory Gardens proved that people in cities really can produce a significant portion of their own food,” said Zoll.

More than 10,000 community gardens, generally built on publicly owned land and open to residents on a first-come, first-served basis, are now operating in the United States and Canada, she said, providing inner-city residents with fresh, affordable vegetables — and strengthening neighborhoods by stimulating interaction among residents.

For first-time gardeners, they also offer hands-on expertise and assistance from people who have been growing vegetables for years. “The gardener next door may have been growing for years, and they’re almost always willing to share their knowledge,” Zoll said.

New varieties of seeds and burgeoning demand from gardeners growing in small spaces have created smaller plants that can be harvested more quickly, from ever-popular cherry and cluster tomatoes to fast-growing corn with multiple ears on each stalk.

The best way to determine what will grow best in a specific setting is to carefully peruse garden catalogs for seeds with the most important qualities, said David Chambers, manager of the public vegetable garden at Callaway Gardens in Pine Mountain, Ga.

For instance, tomato growers need to be aware of the difference between “determinate” and “indeterminate” varieties. Determinate tomatoes are generally smaller plants that produce large crops all at once. Indeterminates, which are often the best choice in an urban garden, are usually larger plants that can be harvested over a much longer period of time. Catalogs also will include information on the size of the plant and the number of days to maturity.

Urban gardeners working in small spaces generally want smaller plants that can be harvested quickly, because the faster they’re harvested the less likely they are to have pest and insect problems, Chambers added.

The best control is prevention, he said, and plants with optimum levels of water and fertilizer are less likely to attract pests. Most county extension offices offer “field guides” to local diseases and pests, with information on what experts expect to be most damaging every year so gardeners can identify problems before they’re out of hand, Chambers said. “If you catch most insects at an early stage, they can be picked off by hand or washed away with a solution of about a teaspoon of detergent in a gallon of water.”

Once plants succumb to pests or disease, it’s generally not worth the investment in chemicals to save the plant, he said.

And inch for inch, urban gardens can be significantly more productive with less work, Lamp’l said.

“Traditional vegetable gardens only utilize about 30 percent of available space because they need walkways and spacing between plants. Space in urban gardens is used more efficiently so you minimize your harvest.”