It’s quite a building, too. Formally called Federal Center South Building 1202, the new 209,000-square-foot office was built on a 4.6-acre brownfield site that was home to a 1940s wood and concrete warehouse.

The building includes some 200,000 board feet of structural timber and 100,000 board feet of wood decking salvaged from the old warehouse. The building’s horseshoe layout maximizes space and natural light while the entrance faces a rain garden, a nod to the corps’ mission as manager of the nation’s waterways. 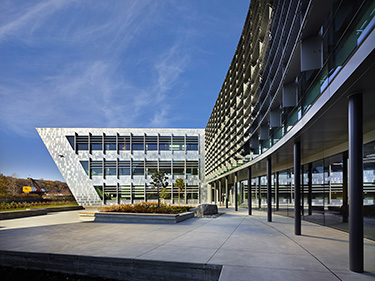 With an Energy Star rating of 100, it is also one of the most energy-efficient buildings in the U.S. Government Services Administration’s portfolio. This building incorporates innovative integrated mechanical systems, a rainwater collection and reuse system, geothermal energy, thermal storage and underfloor low-volume HVAC systems. In short, it’s a sustainability showpiece.

While it certainly deserves the LEED platinum rating for sustainability and energy efficiency, that was never the goal. In fact, the building’s owner, the GSA, which functions as the government’s landlord, had specified LEED gold, the second-highest rating in the USGBC system.

Jumping from gold to platinum wasn’t an accident, however. Rather, it was an achievement based on three interconnected things: the owner wanted a high-performing building, the performance requirements supported that goal, and a high level of collaboration among team members helped deliver it.

In many of its recent building and renovation projects, the GSA has relied on its Design Excellence Program, which encourages high-performance buildings that help set new standards for sustainability. In that regard, the GSA viewed this project as an opportunity to pursue innovation and push boundaries.

As in most construction projects, the building specifications are the controlling document. In the hands of many organizations, including the federal government, the technical documents can look a lot like rules and regulations. They specify materials, quantities, systems and even construction techniques. 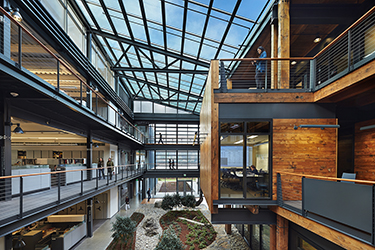 [enlarge]
Much of the wood was salvaged from an old warehouse that occupied the site.

For this project, however, we developed an owner’s program of requirements (OPR) that set standards for what needed to be achieved. The OPR was a performance-based document, rather than a prescriptive one, and set a clear “destination” for the design-build team, while leaving it up to the team to determine the best way to get there.

The performance and warranty criteria outlined in the OPR were focused on making sure the building would be relevant for a long time — that it would be durable and functional for many years as well as cost effective to operate and maintain. Despite the recent pullback in energy prices, over the long term the cost of heating, cooling and powering a building is expected to climb.

Perhaps the single criterion that had the greatest impact, and encouraged the highest degree of innovation, was the requirement — a performance goal — to exceed the ASHRAE 90.1 standard by 30 percent. ASHRAE 90.1 is a standard that sets minimum levels of energy efficiency, and that one goal set the tone for a lot of the decisions that were made. After a full 12 months of actual use, the building exceeded that standard by 40 percent.

For instance, this project is one of the first in the region to use structural piles for geothermal heating. Ground conditions required that the building rest on 18-inch pipe piles filled with concrete. After a round of tests to see if it was feasible, the design-builder ran geothermal loops through several of the piles before the concrete was added, which generated 40 tons of heating and cooling.

It was a cost-effective addition because the piles were already going in with a very high upside: an endless supply of energy to help heat and cool the building.

The final element was the collaboration and trust among the project team that allowed the best ideas to surface and be carried out successfully.

For example, the design-builders selected a cutting-edge smart lighting system that adjusts lighting based on occupancy and, when occupied, on existing light. The system delivers exactly the amount of light necessary, where and when it is needed. Actual light usage is communicated back to the central system, where it’s tracked and measured.

But cutting edge isn’t always user friendly. In this case, the electricians weren’t familiar with the product and, as it turned out, it had some bugs as well. Because trust existed across the project team, installing the system became a group endeavor. Electricians, experts and inspectors worked together to understand the system and troubleshoot it for a successful installation.