It can be difficult to imagine making a significant difference by implementing personal changes such as driving less and turning down the thermostat. However, climate change impacts will be felt on a local scale in our communities and watersheds, and there will be a broader range of impacts than just rising air temperatures and sea levels.

The good news is that there are forward-thinking actions that agencies, cities and counties can take at the local scale to prepare our communities for climate change.

Adaptation means taking action now to change our infrastructure and our processes to reduce the anticipated negative impacts of a changing climate.

A few of the climate change impacts beyond air temperature and sea level rise that Washington state communities will face include increased flooding and stormwater, increased sediment flows and lower river flows. 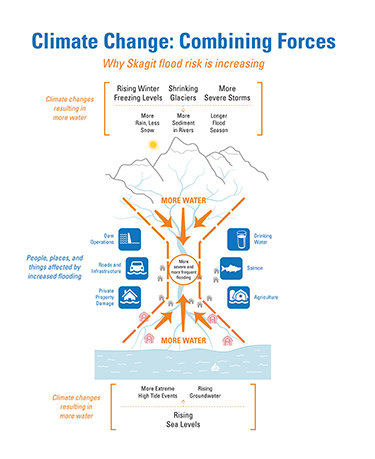 Flooding is already a major problem for many rivers in Washington. According to the state Department of Ecology, flood hazards exceed the cost of all other natural hazards in the state. Unfortunately, climate change is anticipated to make flooding more common and more severe as precipitation patterns change, glaciers melt, sea levels rise, high tides become more extreme and increased sediment fills in flood storage capacity.

More frequent and severe flooding is expected to substantially increase risks to water and wastewater treatment plants, transportation corridors and other critical infrastructure. This is in addition to the increased risk to human safety and property damage during these more frequent flood events.

In order to deal with these expected changes in flooding and stormwater, infrastructure needs to be right-sized and built to accommodate future flood levels.

While rivers are expected to flood more frequently in the winter, less water is expected in the summer.

Changing precipitation patterns and retreating glaciers will contribute to lower flows, causing less water to be available for agriculture in the summer when it is needed most. As flows decrease, particularly as cold water from melting snow becomes rarer, the water in rivers will become substantially warmer.

Water temperature is a key limiting factor for salmon health and viability in many areas and is only expected to get worse with climate change. 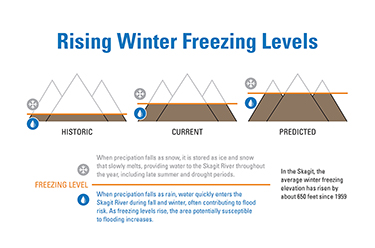 In most of Puget Sound’s major river basins, sediment is a major concern. As steep slopes in upper watersheds erode, rivers carry sediment loads downstream and deposit them in river channels and deltas or shunt them out to the sound.

While sedimentation is a natural process, it is a major concern for flood managers, restoration experts and others who are invested in our rivers. And climate change is expected to increase sediment loads.

Shrinking glaciers and reduced snowpack mean that less ice and snow will be covering slopes and slowing erosion processes in the headwaters of Puget Sound’s rivers. Increases in rainstorms will also cause sediment to be released more frequently. Sediment will accumulate behind dams, put more pressure on levees, fill in floodwater storage areas, cloud our water supply for drinking water and agricultural irrigation, and deposit in our restoration projects.

Anticipated future sediment loads need to be considered in the design of any infrastructure that depends on or is near our rivers.

In 2013, the city of Anacortes replaced its water treatment plant, the largest supplier of potable water for both Skagit and Island counties.

When designing the new plant, Anacortes worked with the Skagit Climate Science Consortium. This nonprofit organization of scientists, which provides information about climate impacts, helped the city determine how climate change might impact the new plant.

Based on estimates of future sediment levels, Anacortes designed a new sediment removal system for the plant. It determined the proper level of flood protection for the plant by accounting for changes in future precipitation and sea level rise.

The new, more resilient, treatment plant was completed in 2013.

Governor Jay Inslee told the Skagit Valley Herald, “It’s really refreshing to see a community just making practical, common sense, scientifically engineering-driven decisions rather than ideological issues. To me it’s an inspiring example of how if you just focus on science and what it means in your machinery, you get things done.”

In 2012, Seattle Public Utilities was concerned about increases in stormwater when designing a long-term control plan to address the city’s remaining uncontrolled combined sewer overflow (CSO) outfalls, which can discharge pollutants from combined sewers and stormwater runoff into Lake Washington, Puget Sound and other water bodies during large rainstorms.

SPU wanted to design CSO storage facilities that would account for current conditions and the expected effects of climate change on the frequency and volume of CSO discharges.

SPU used climate change modeling to project how changes in precipitation patterns would affect CSO basins in the future and used the results to ensure that new CSO storage facilities are designed in consideration of climate change and climate variability. As projects move forward, SPU plans to incorporate additional modeling in the design of individual CSO facilities.

On the other side of the Cascades, the state Department of Ecology and the Bureau of Reclamation teamed up to develop the Yakima River Basin Integrated Water Resource Management Plan.

Extensive climate change modeling looked at changes in precipitation, snowpack, stream flows and agricultural use in the Yakima River Basin. This information was incorporated into the planning effort to ensure that infrastructure was designed to meet climate projections.

A range of elements (fish passage, new water storage, habitat enhancement and conservation) were included in the integrated plan, which won an Integrated Water Resources Management Award from the American Water Resource Association in 2012.

The range of climate change impacts to ecosystems and to human infrastructure will be broad. In addition to the impacts discussed above, we will see changes in fire frequency, diseases in plants and animals, glacier melt, farmland and urban drainage, dam operations, lake recreation management and fishing.

Fortunately local and regional resources are available, including the University of Washington’s Climate Impact Group (cses.washington.edu/cig) and the Skagit Climate Science Consortium (skagitclimatescience.org). Both organizations offer examples of how unbiased climate science can help local jurisdictions build climate change adaptation into their infrastructure replacements and upgrades.