Is Seattle’s Living Building Pilot Program ready to take off?

By ANDREW LEE and MYER HARRELL
Special to the Journal

In October 2016, the Seattle City Council approved an update to the Living Building Pilot Program (LBPP) — an ordinance and land use code provision which offers height and floor area ratio incentives in exchange for meeting the world’s most stringent green building standard, the Living Building Challenge.

Despite the value of these unique zoning incentives, only two projects have completed the program since its inception in 2009. Through this latest iteration, the city intends to increase participation in the program, and the surging market in Seattle has led to additional inquiries about the program from developers.

However, many questions remain for program administrators and the local real estate community as to how achievable the LBPP is across the city, and what key factors impact its feasibility.

The creation of Pilot Pathways

In April, Andrew Lee published a study that aimed to answer the question: What is the current and future potential for the LBPP?

“Pilot Pathways: A Technical Feasibility Study of the Living Building Pilot Program” evaluates the program at the city scale to identify the potential reach of the LBPP and the patterns of its anticipated outcomes. Results of the study are presented as a series of maps and tables that are available online, intended to help bridge conversations between LBPP applicants and the city.

The Pilot Pathways study was prepared using city zoning and parcel GIS data, establishing a series of criteria to filter for the sites with the highest potential to meet the LBPP. 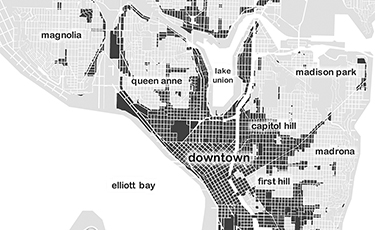 Graphics from Andrew Lee [enlarge]
Here is an example of a Pilot Pathways map. Shaded areas are zones eligible for the Living Building Pilot Program.

Sites that are not eligible for the program are excluded from the analyses, which includes parcels in shoreline zones or zones that do not qualify for design review. The remaining parcels are then tested for feasibility to meet each of the LBPP pathways, which are those based on certification programs from the International Living Future Institute: achieve one of three Petal certifications (Energy, Water or Materials) or achieve full Living Building Challenge certification.

Whereas LBPP applicants must satisfy a wide range of design requirements for each pathway, the analyses in this study focus solely on site-dependent criteria, evaluating whether parcels have the ability to generate their energy and water needs on site.

The study provides a method for calculating typical solar energy and water harvesting potential per site area, compared to the anticipated future project’s energy and water consumption, relying on zone-based floor area ratio assumptions. Additional requirements specified by the city — that all LBPP projects use no potable water for non-potable demands, and must beat the Seattle Energy Code by at least 25 percent — are considered in each analysis as well.

Results are presented for both commercial and multifamily projects, assumed to be the two most prominent building types pursuing the LBPP.

Achievable for many sites

The study reveals intriguing outcomes. LBPP eligibility is limited by city zoning patterns, with only 20.3 percent of the city’s parcels (representing 45 percent of the total land area) able to pursue the LBPP. Of these 39,000 parcels, the feasibility of each pathway varies by whether a project is commercial office or multifamily, though certain trends emerge in performance thresholds as well.

While the study breaks down three performance levels, the “best in class” level represents a route to LBPP assuming energy and water efficiency levels in the new development comparable to the two completed pilot projects: the Bullitt Center and Stone34.

At this level, the following is found:

?—? Conditional zoning departures offered by the LBPP can significantly improve the feasibility of more stringent pathways. Departures for higher parcel coverage for solar energy and allowance of solid waste storage for ultra-efficient water systems can increase the feasibility of Water Petal, Energy Petal and Living Building Challenge pathways to over 80 percent of eligible parcels.

Overall, the study finds that the LBPP is very achievable for many sites throughout the city if a developer pursues industry-leading, “best-in-class” water and energy efficiency levels.

This formula is used to compute the energy use intensity target required to achieve Energy Petal certification.

Only the densest zones in downtown and adjacent South Lake Union present challenges for LBPP pursuit, while in all other zones the LBPP is found to be feasible under at least one pathway.

Since its release, the study is being used as a reference tool by several local design firms to support their clients’ due diligence process when considering the LBPP. While the incentives are enticing (a 15 percent bonus in floor area ratio and 10- to 20-foot increase in allowable structure height, plus access to additional land use departures), participants are often challenged to weigh the incentive value against the costs of multiple system upgrades and soft costs (particularly if more than one pathway is under consideration).

It is in a project team’s best interest to carefully select a single pathway (energy, water, materials or Living Building Challenge) best suited to the site before the building owner commits to the program in the entitlement process. To date, the value of the Pilot Pathways research has been to inform or validate these assumptions and give project teams greater confidence in their choice.

Next for Pilot Pathways

Going forward, this study has the potential to be used much more broadly by the city of Seattle to streamline communication between the program administrators and project team applicants.

Land use planners can use the study to quickly back-check new LBPP participant proposals and flag potential risks early in the process. By avoiding costly and politically undesirable misses in performance targets, this could ensure public and developer confidence in the program.

Findings from the study could also help the city focus its support, whether it be guiding project teams through specific aspects of the design review and entitlement process or offering more targeted assistance from the program’s Technical Advisory Group.

Information from the study can also help shape the city’s outreach for LBPP or even evolve the ordinance itself. Using this data, city planners can proactively seek and prioritize applicants within zones that have the highest potential for LBPP or offer opportunities to test the full range of pathways and new building types.

Additionally, the city can use data from the study to inform changes to the pilot that address eligibility barriers or performance limitations that have prevented certain building or tenant types from entering the LBPP. At an even higher level, the city could use the study’s methodology to analyze the impact of future zoning changes to LBPP applicability, to inform the conversation about how future growth planning intersects with the city’s green building development goals or climate action planning.

The city of Seattle established itself as a leader by creating the LBPP, and will continue to lead through its iterative development. As other jurisdictions look to this program as an example of progressive building incentive policy worth emulating, it will be all the more critical to ensure that the program succeeds.

Where will the next Living Building be in Seattle? We may not know, but we now have a better tool to find the answer.

Andrew Lee, a project manager for Architecture 2030, is a green building practitioner with over 15 years of work in research, technical consulting and policy development related to net zero and carbon neutral buildings. Myer Harrell, director of sustainability and a principal at Weber Thompson, is an architect focused on boutique, high-performance commercial offices, including a project in Fremont pursuing the LBPP.