River restoration in the Pacific Northwest is a $300 million a year business that leads the world in terms of both restoration science and practice. Despite this, barriers to fish passage continue to be a problem.

Road crossings at rivers or streams are known to create barriers to fish movement when they are improperly designed or constructed. When fish movement is limited by barriers within river systems, species are no longer able to migrate and are vulnerable to climate change and other issues.

Current ranges of salmonid species are much lower than their historic ranges, and climate change impacts on peak stormflows, summer low flows and water temperatures threaten to further reduce salmon ranges and populations. In this article we explain why it is time to rethink our approach to barrier removal.

In 2013 the U.S. District Court for Western Washington issued an injunction directing the state to correct fish passage issues on road culverts because they violate the 1854-1855 Stevens Treaties, which guarantee tribal rights to off-reservation fishing. The court directed that all high-priority barriers (those that block access to more than 200 lineal meters of upstream habitat) shall be replaced by 2030, although the state may defer up to 10 percent of these high-priority replacements based on cost and complexity.

While the court’s ruling establishes the seriousness and urgency of barrier removal, it does not indicate how the state can achieve compliance.

Washington State Department of Transportation estimates there are no less than 1,989 barriers to fish passage in the state road system, that 978 of these culverts are covered by the 2013 injunction and that, of those, 806 are high-priority culverts that must be replaced by 2030.

That is a lot of culverts. It would be a monumental task to complete the necessary work within the 13 years allowed by the court. 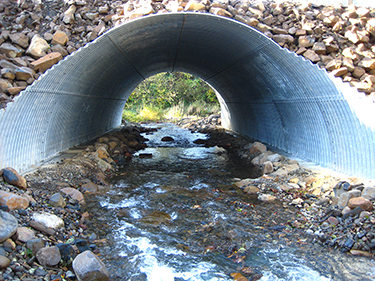 Photo from ESA [enlarge]
This culvert on Wolfe Creek near its confluence with the Nestucca River in Oregon simulates a natural stream.

Since 2013, WSDOT has corrected 44 (just 4 percent) of the barriers covered by the injunction and a total of 61 (3 percent) of known barriers statewide. WSDOT’s six-year culvert replacement plan (2015-21) schedules another 48 culverts for replacement. However, the estimated cost of meeting the terms of the injunction stands at $2.4 billion and only $640 million has been allocated through the end of 2031.

But the wider problem is not limited to culverts owned by WSDOT or even the state. Federal agencies (U.S. Forest Service and Bureau of Land Management) report that over half of the estimated 10,215 culverts that exist on fish-bearing streams within federal lands in Washington and Oregon may also be fish passage barriers.

If access to historical habitat is to be recovered, tens of thousands of culverts will have to be replaced. Using current methods, the cost of achieving this could be in the range of $60 billion to $86 billion and that simply is not feasible.

In the world of fish passage barrier removal, owners, regulatory agencies and design professionals all try to limit their liability; a behavior that is driving up project costs and reducing the speed that barriers can be remedied.

A prudent way to view the barrier problem is to assess barriers based on risk and complexity, categorizing them according to the risks they pose to people, property and fish, and the technical challenges posed by redesigning them to eliminate the risk to fish without increasing the risk to people and property. Then the level of effort in design and permitting, as well as the priority in terms of habitat access, can be tailored to the associated levels of risk.

By design we are referring to the process through which engineers and other design professionals create solutions for a specific site to achieve desired outcomes. In the case of simple barrier removals, we must streamline our processes and move towards a production-based methodology by leveraging scientific approaches and innovative engineering to craft solutions that can be rapidly implemented at a fraction of the cost and time required for unique solutions.

On the other hand, complicated sites require unique approaches to achieve favorable outcomes and these sites must be addressed differently than the straight-forward crossings.

Henry Ford was a pioneer in automobile manufacturing because he perfected mass production; simple fish passage barriers could be removed following this example. We could move away from designing and permitting based on unique site characteristics for straight-forward projects. This approach would involve segregating barrier sites into a straight-forward category and a more complex category based on risk.

Straight-forward barriers could be pre-engineered based on stream channel size, watershed and roadway characteristics, and other physical indicators. Standardization of culvert dimensions to improve efficiency and reduce manufacturing cost is also essential and the environmental permitting process — which involves local, state and federal agencies — could be streamlined to support this vision.

Only through cooperation and agreement at all stages of the design, permitting and construction life-cycle can we begin to address the magnitude of this issue. The good news is an effort is underway that is a step in the right direction to address this massive issue.

Environmental Science Associates and its partners are working with the state Department of Fish and Wildlife to refine the department’s approach to modeling water flow and sediment movement at culverts. The goal is to enhance planning, design and implementation of successful, sustainable fish passage at culverts throughout the Chehalis Basin. The project focuses on simple culverts and the assessment tools that can be applied broadly throughout the state to address engineering in a cost-effective manner.

Complex crossings — which represent a small minority of cases where failure would have unacceptable consequences for people, property and fish — must continue to be designed on an individual basis. These projects will continue to follow the implementation approach that all barrier removals are currently corrected through today. In this category unique investigation, analysis and design are required but it is essential that we distinguish this complex category from straight-forward projects where a production-based approach could work efficiently.

The path forward to address this issue is collaboration and reconciliation among all stakeholders at the local, state, federal and sovereign nation/tribal levels. We must distinguish between complex and simple projects based on risk, pre-engineer projects in the simple or straight-forward category, and streamline manufacturing and environmental permitting to foster a barrier removal production line that could increase the rate of barrier correction while reducing project costs.

Joseph Richards is a director at ESA and a senior civil and water resources engineer. He has over 25 years of experience working on projects that solve natural resource and infrastructure conflict issues. Colin Thorne, senior river scientist at ESA, is internationally recognized for his expertise in flood control, fluvial geomorphology and sediment management.