Bold actions are needed to save local orcas

The 2005 listing of southern resident killer (orca) whales as endangered under the Endangered Species Act was an urgent wake-up call that the health of our coastal waters was being impacted by humans to a degree that was inconceivable just decades earlier.

Despite our love of Puget Sound and nearby marine waters, few people realized that the fate of the region’s apex marine predator and cultural icon was being jeopardized by our actions.

Southern residents are a unique group of orca whales found in the waters of Puget Sound during summer months. Southern residents have a different diet than transient killer whales and are facing some of the most serious threats to their population. In the Puget Sound region, the southern residents’ listing, coupled with the 1999 Endangered Species Act listing of Puget Sound Chinook salmon, was a call to action to learn more about how our actions affect these highly social and long-lived mammals and commit to reducing our impacts on their survival.

Fast forward to 2018 and the southern resident population size — 74 individuals — is the lowest it has been in 30 years. The population’s struggle has been front-page news this summer as we witnessed the death of an infant calf whose body was carried for 17 days by its mother, and the assumed death of a 3-year-old whale who had been critically emaciated.

According to the Orca Network, no southern residents have been born and survived since 2015. 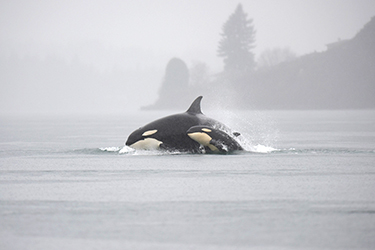 Photo by Mike Charest via Flickr [enlarge]
No southern resident orcas have been born and survived since 2015.

Recognizing the critical state of the population, Gov. Jay Inslee signed an executive order in March to implement a series of immediate actions to benefit the orcas and establish a task force to identify, prioritize and support the implementation of a longer-term action plan.

The tragic situation over the summer further underscores the urgency needed to reduce threats to the whales.

Between April and October, southern residents stay in and around Puget Sound and the southern portion of the Strait of Georgia in Canada. During winter months they have been sighted in coastal waters as far north as Alaska and as far south as San Francisco.

Chinook salmon recovery and their availability as a food source depends upon several factors often referred to as the four H’s: harvest, habitat, hydropower and hatcheries. Each of the four H’s has a significant influence on the sustainability of Chinook salmon populations. While the influence of each of the four factors varies among watersheds, Chinook recovery depends on coordinated and complementary improvements in all H’s.

Another important factor affecting Chinook salmon populations is predation by marine mammals, notably sea lions. In some river systems, predation by California sea lions has taken a significant toll on Chinook salmon numbers. In the Lower Columbia River, the Washington Department of Fish and Wildlife describes the predation problem as “especially acute” below Bonneville Dam, the lowest dam on the river.

Chemical contaminants: Chemicals such as pesticides, motor oil and other household chemicals are introduced to our coastal waters through stormwater runoff and wastewater. Fish and other marine life ingest these chemicals, which become stored in their tissue. Animals higher in the food chain tend to accumulate the chemicals found in their prey. As a result, top predators like the southern residents have higher accumulated levels of chemicals. Whales store the chemicals in their fat. These chemicals are released when they are not getting enough to eat, affecting the animals’ reproductive success among other health concerns. 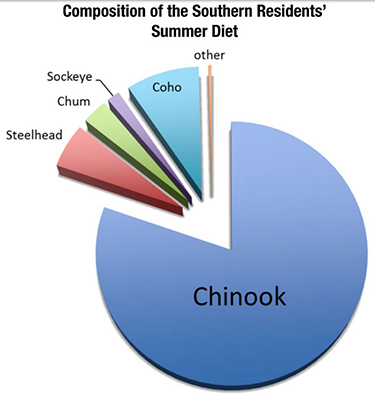 Many of the immediate actions have been completed and their reports are available online at https://tinyurl.com/WA-gov-Orcas.

The governor’s task force is composed of three workgroups focusing on the primary threats of prey availability, chemical contamination and vessel disturbance. They will recommend additional actions for 2019 and 2020. These recommendations are expected to be large-scale actions that will have an immediate and positive impact on the southern residents.

The task force will release a comprehensive final report by November that details the recommended actions toward recovery. A report discussing the progress made as a result of those actions is expected in October 2019 (after which the task force will end).

Addressing the primary threats to southern residents will require significant changes to our management of natural resources and even our way of living, and the task force is expected to recommend several bold actions to address the factors affecting southern residents’ survival.

The region may need to commit to improved stormwater management and “no-go zones” for boats. The region may also need to step up efforts to restore rivers and estuaries, as well as the Puget Sound shoreline, if we hope to increase the numbers and availability of Chinook as prey.

The task force may also recommend changes to hatchery operations, such as the number, timing and age of fish released. This will require a delicate balance to ensure no detrimental impacts to our wild salmon populations. Changes to the management of marine mammals such as sea lions may also be necessary given their active predation on Chinook salmon.

The work of the task force and the successful implementation of the immediate actions identified in the governor’s executive order are important first steps toward recovering southern residents. Ultimately their fate is in all our hands.

Paul Schlenger is a senior fisheries biologist at Environmental Science Associates. He has over 20 years of experience working on salmon restoration and watershed planning projects.