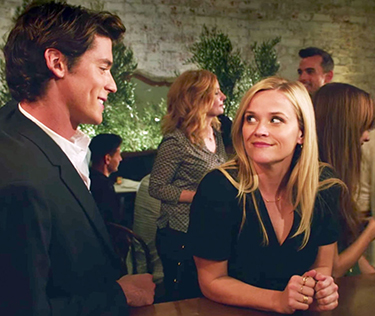 Reese Witherspoon is wasted as Alice, a recently separated mother of two who moves back into her childhood home.

That lovely bit of casting alone — Witherspoon and Bergen as daughter and mom — should have been enough to lift “Home Again,” a debut from writer-director Hallie Meyers-Shyer, into at least the ranks of fairly entertaining, harmless guilty-pleasure rom-coms.

Instead, one is left marveling at how disappointingly inept it feels, from plot developments so obvious you see them coming 40 minutes ahead, to the gooey, lingering close-ups of characters laughing happily. What are they laughing about? Maybe there were lots of great private jokes flying around the set, because there aren't a lot of great ones in the script — save a few choice barbs from Bergen, and a very well-timed “Hamilton” joke.

Witherspoon is Alice, a recently separated mother of two who's returned to Los Angeles from New York, escaping a difficult marriage to a scruffily charming music mogul (Michael Sheen.) Luckily, she can move right into her childhood home — her huge, beautiful childhood home, with linens so soft they're a topic of conversation, and a sizable guest house.

Which is where the three guys come in. That would be Harry (Pico Alexander), his brother Teddy (Nat Wolff) and friend George (Jon Rudnitsky). They're budding 20-something filmmakers trying to get their movie produced, and they're a bit down on their luck.

Of course, this movie's version of being down on one's luck is a little different than in the rest of the world. It's not just that these guys somehow waltz into high-level meetings with agents and producers. It's that everyone here looks like they've grown up in a Ralph Lauren catalog. Now, plenty of movies have been made about well-off people without real-world problems. It's not a crime.

But takeout from Nobu? That may be pushing it.

Anyway, we digress. Alice, we learn, is the daughter of a late, well-known filmmaker. Mom Lilian (Bergen) was an actress. Dad didn't always treat her well, but Lilian has a great explanation for why she's not fussed: “He's gone now, so I won.”

We begin on Alice's 40th birthday, and she's weeping into the mirror. Then she goes out and celebrates at a bar, where she and her tipsy friends meet Harry, Teddy and George. Drinking leads to dancing, to more drinks at Alice's home, to near sexual encounter between Alice and Harry — stopped only because Harry's throwing up.

You'd think Alice would wake up, do the laundry (which she does), and realize Harry isn't much of a catch. But soon all three guys have moved into the guest bungalow — their own Ralph Lauren frat house. And Alice starts sleeping with Harry — once he fixes her kitchen cabinet. “We shouldn't do this,” she says, as they kiss. “But I fixed your cabinet,” he says. Guys at home: that line may not always work for you.

The problem isn't even the unlikeliness that Harry would even know his way around a toolbox. It's that Harry is just so boring. We all want Alice to have fun; it's not his age that grates. It's his emptiness.

And then ex-husband Austen shows up. That's Austen-with-an-E, not Austin-with-an-I. And he says, “Let's fix this” (the marriage, not the cabinet). Alice has to make a decision.

Meanwhile, there's a very important school play. And this is what we mean by obvious developments, because in any rom-com with a school play, you can bet that someone isn't going to make it in time, and there are going to be shots of empty seats and anxious young faces. And yes, this is what happens.

We won't tell you how it turns out. We CAN divulge that there will be more lingering close-ups of people laughing. Again, what are they laughing about? If you can figure it out, let us know.