Tarragon recently announced the addition of five new faces to its Seattle office. Company president Dennis Rattie said in a statement, “I'm very excited to have this talented group join the Tarragon team — their broad range of experience across development, construction and marketing will have an immediate impact across multiple areas of the company. That quintet comprises: Bayard Blair, now in acquisitions, who makes the move from CBRE; Jeff Lovshin, in multifamily, who comes from Bromley Cos.; Katelin Carter, in marketing, who was previously with Hewitt; Monique Comeau, formerly with CBRE, now to focus on the industrial market; and Peter Mann, now to specialize in multifamily management and construction, who makes the move from Heartland. 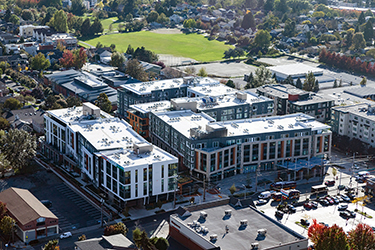 Vulcan Real Estate recently completed its Jackson Apartments. Now some of the new retail tenants are being confirmed. Among them are QueenCare, a locally based, Black and woman-owned small business. It'll have one of three small but prominent bays facing South Jackson Street, with about 500 square feet. The boutique sells luxury body-care products, home items, wearables and unique gifts. Vulcan says the tenant came via its partnership with the nonprofit Ventures, which fosters micro-businesses owned by women, BIPOC, LGBTQ+, immigrants, refugees and underserved low-income entrepreneurs. Jackson Apartments, which replaced the old Red Apple, has the recently opened Amazon Fresh as its anchor grocery tenant.

The city of Seattle recently announced an opening on the International Special Review District Board, which approves all design proposals in the Chinatown-International District area. The open slot is one of two appointed positions; five are elected, and there's one member-at-large. The two appointed positions are drawn from CID residents or workers or those with historic links to the community. Interested parties should submit their qualifications to resume to rebecca.frestedt@seattle.gov by Feb. 5.

JLL announced the recent appointment of its John Paul Mulhern to lead the brokerage's new lead industrial investment advisory sales team for our region. He was previously with JLL's international capital group, also based here in Seattle. The firm's Tom Wilson said in a statement, “Given the growth of the industrial sector that we've seen throughout the pandemic, we felt it was important to build out our suite of services to include an industrial expert who will serve our industrial clients in Seattle and throughout the Pacific Northwest.” In his new role, Mulhern will work closely with Mark Detmer in the firm's Los Angeles office.

Berkadia recently announced the acquisition of the apartment brokerage practice of Moran & Co. Terms were not announced. The new arm will be called Berkadia Institutional Solutions, Powered by Moran. Marking the move from Moran & Co. are Mary Ann King and Keith Misner, both based in California, along with about 31 other brokers. Berkadia CEO Justin Wheeler said in a statement, “We remain optimistic about the future of multifamily and are committed to building the most robust CRE platform in the country, powered by the best talent in our industry. There's no team more experienced or respected in the institutional sales space than Moran.” Berkadia is the 12-year-old real estate services venture of Berkshire Hathaway Jefferies Financial Group.

Local firm Porch, an online platform for residential real estate services including home repairs, went public last fall. Now it's announced four pending acquisitions. It plans to pay about $100 million, in cash and stock, for the insurer Homeowners of America of Texas. The firm is considered a business-to-business-to-consumer operation, or B2B2C. Porch founder and CEO Matt Ehrlichman said in a statement, “HOA is a great business with a deep and experienced leadership team who have spent more than a decade building a growing, profitable, and innovative managing general agent and insurance company hybrid. Porch will also acquire the marketing and data platform V12, of Boston, which is a software-as-a-service operation, or (SaaS). That stock and cash deal is expected to close at up to $28 million, also in the second quarter. In two smaller deals, Porch will acquire PalmTech, a home inspection platform, and iRoofing.

Boise Cascade announced that Nick Stokes, executive vice president of the company's Building Materials Distribution (BMD) business, has elected to retire on March 12, with 42 years of service. The board of directors has appointed Jeff Strom to the role of executive vice president of the BMD division. Strom joined Boise Cascade in 2006 in a sales position and became a branch manager in Milton, Florida. He currently serves as vice president & general manager of BMD's Eastern Region, based in Boise.

CI Security announced the addition of Steve Sedlock as the company's chief revenue officer and the promotion of Kristoffer Turner to vice president of security operations for the Critical Insight Security Operations Centers. Sedlock most recently was the chief growth Officer for EPSi, a provider of financial decision support, budgeting and planning solutions for the healthcare industry. Turner started at CI three-and-a-half years ago as a security analyst. He led the opening of CI's second SOC in Ellensburg, and was instrumental in creating Managed Detection and Response for Microsoft Azure and Amazon Web Services Environments. CI Security provides Managed Detection Response services, and is focused on defending critical systems in healthcare, the public sector, and other industries.